It’s a grownup party on DStv Compact this October, from Come Dine With Me SA, to Mzansi Magic’s Sunday Sexy Love. 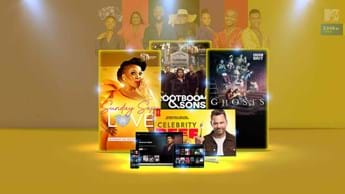 DStv Compact has the good gossip this October. It’s all about who you know, and we’ve invited South Africa’s most fascinating and scandalous people to the party.

Celebrity supercouples are dishing about their intimate relationships in Mzansi Magic’s (DStv Channel 161) brand-new talk show Sunday Sexy Love. Meanwhile, Queers Of Jozi is welcoming us inside South Africa’s thriving and artistic LGBTQIA community, and Come Dine With Me South Africa is back with picky guests and tricky hosts.

If you’re looking for a second helping or maybe something for Spooky Season, speak of the dead – it’s the must-see British haunted house comedy series Ghosts! There’s also the glamour, excitement and fashion of the BET (Channel 129) Hip Hop Awards 2022 on Thursday, 5 October.

Watch to check it out? Go to Catch Up on the DStv App or connect to Explora and select Universal+.

PS: Because you get to see so much more on DStv with Compact, sports fans can watch the Mzansi Magic docu-series on soccer legend Doctor Khumalo from Sunday, 2 October. Check out our other monthly highlights packages for news about shows like JAN R.S.V.P, Departure, and Giants Of The City.

There’s drama at the family funeral parlour when this season picks up six months after the events of Season 1. For starters, Mbulelo (new cast member Thembekile Komani) is about to become a father twofold – and he wants to marry both the women he impregnated. His brother Zola (Mbasa Msangelo) attempts to break out of the family business, and their aunt, Funeka (Zandile Msutwana) is also trying to find her feet. The family is forced to put their differences aside to save their business when new competitors arrive in town.

South Africa loves love and there’s nothing we adore more than a celebrity romance. Now, Tumi Morake is bringing Mzansi’s best celeb couples onto her new talk show to ask them all the things we’ve been dying to know. Boity Thulo and Anton Jeftha, Bontle Modiselle and Priddy Ugly, as well Gogo Maweni and Sabelo Mgube are some of the pairs that have all promised Tumi their unfiltered love stories, and their strategies for keeping love alive even while they seem to work 24/7.

Come Dine With Me South Africa

Voiceover legend Dave Lamb returns to roast this season’s guests and hosts to perfection. Four strangers from Cape Town and Johannesburg will take turns hosting each other at extravagant dinner parties in their own homes, and then they’ll keep score. We’re expecting this to get extra spicy because there’s an uninvited guest at the party: Mr Loadshedding. One host practically has a zoo including a real, live Peppa Pig. What can we dish about the menus? Try a Driehoek Kaaskoek gone wrong, Kurri Kitchri, Teriyaki Salmon and even roasted lamb. Look out, Dave!

If you can’t stand the heat, get out of the kitchen! Joel McHale (we miss him in The Soup) plays referee as two celebs throw down at the stove on this reality competition series. We have been promised sheer anarchy, comedy, humiliating forfeits and the antidote to straight-laced, straight-faced TV cooking. You’ll see Ben Higgins and Nick Viall compete to see who the best Bachelor is. There’s a Gen X vs Millennial showdown between Loni Love and Justin Sylvester. Nikki Bella and Brie Bella settle a score as sisters, and actress Missi Pyle is out to make culture commentator and producer Jeff Lewis eat his words.

When Alison Cooper (Charlotte Ritchie) inherits country manor Button House from a distant relative, she isn’t expecting to share the place with anyone other than her husband, Mike (Kiell Smith-Bynoe). Button House is home to a collection of bickering ghosts who’ve died on its grounds over history (back as far as prehistoric times). After one of them tries to get rid of Alison by pushing her out of a window, she wakes up with the ability to see them. The Coopers and ghosts – including Georgian noblewoman Kitty (Lolly Adefope) and disgraced politician, Julian (Simon Farnaby) – agree to live peacefully, as the Coopers set about renovating the manor.

Johannesburg’s fashion queens, celebrities and gender benders invite us into their relationships, day jobs, and night lives. The reality show will explore the bold personalities as they take on the City Of Gold. The cast includes: stylist to the stars Phupho Gumede, club DJ Andzelo Tivani and social media influencer, Itumeleng Mokwatlo, who’s better known as Tumi Powerhouse.

Also on Compact this October

on DStv Premium and Compact Plus this October

Check out the other highlights packages for more on these shows, which you will also be able to watch this October…