Step into a bigger world with Giants Of The City, Departure and more this October on DStv Family. 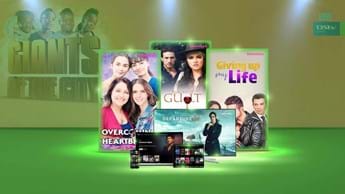 Whether you love big stories, big personalities or big mysteries, you’ll want to live large with DStv Family this October.

South Africa’s most famous little people are back on Giants Of The City with a wedding, babies and big dreams. Michelin-starred chef Jan Hendrik van der Westhuizen is looking for local inspiration as he dreams up dishes for his restaurant in Nice. On top of this, tlnovelas (DStv Channel 133) is treating us to three brand new telenovelas, filled with grand dreams of love, friendship and family.

When Universal+ launches on DStv this October, it’ll be yours at no extra cost, exclusively on DStv. It includes Box Sets of all the best shows from Universal TV (DStv Channel 117) and Telemundo (DStv Channel 118). You’ll also be able to stream current content from these channels.

PS: because you get to see so much more on DStv Family, check out our other monthly highlights packages for news about October’s hit series like, Becoming, Ebukhosini, Nurses and America’s Funniest Home Videos: Animal Edition.

Giants Of The City

South Africa’s little people are making a big noise this season. Thabo and Sbali are in training for an epic boxing match, while Anele also has a big battle ahead of her. She begins to raise her new baby and her boyfriend Gudo gives some serious thought about whether he wants a child in his life. Finzo’s lady has said yes! So, he’s gearing up to finalise those all-important lobola negotiations. Lastly, the crew of besties will welcome new friends by episode six.

We’ve seen her investigate the causes of a plane crash and a train derailment. This season, Kendra Malley (Archie Panjabi) is headed for icy Newfoundland in Canada, where ferry boat The Queen of the Narrows has sunk with 300 passengers onboard. As Kendra and her team, including Dominic Hayes (Kris Holden-Ried) talk to survivors, and US Navy Captain Banks (Eric McCormack) – who was the first on the scene to rescue passengers – gives his input. Kendra and her team will be trying to understand how the boat sank so fast, and what caused the mysterious bang heard just before the ferry started taking on water. PS: The production team built a gigantic model of the ferry and filmed it underwater using drones for those eerie visuals.

Restaurateur and chef Jan Hendrik van der Westhuizen’s home base for this new version of his beautifully shot cooking series is an old 1712s farmhouse, nestled in a lavender field on a Franschhoek wine farm. He is inviting some rather famous guests – including author Deon Meyer (whose novels were adapted for TV as Cape Town and Trackers), activist and glamorous hostess Tannie Evita Bezuidenhout, and food activist Chef Mokgadi Itsweng. They’ll come and inspire him as they spend time together. Based on that, Jan will develop brand-new recipes to delight his diners at his restaurant in Nice, France.

Giving Up My Life

Two families are brought together when Elena and Ernesto reach out to find a bone marrow donor match for their adopted son, Nicolás. While his birth mother Sofia is missing, Nicolás’ biological father Pedro is about to get some rather surprising news, as Sofia didn’t tell him about the pregnancy. Pedro is about to marry Gina, and he believes they’ll all be able to go back to business as usual once he’s made the donation, since Nicolás has a happy family. However, he’s pulled in when he starts bonding over Nicolás, thanks to a shared love of cars. Elena fights back against Ernesto’s snobby and ungrateful treatment of Pedro.

Watch Giving Up My Life Season 1 Mondays-Fridays from Monday, 3 October at 17:20 on tlnovelas (DStv Channel 133)

Fate brings together four wildly different women: Conservative retiree Barbara; journalist-turned-mom Ariadna, whose son Tadeo has Asperger's Syndrome; Barbara’s despised stepdaughter Dafne, who’s newly widowed and pregnant with her second child; and country bumpkin Gemma, who’s lying about her age. Barbara’s second son Ernesto sets the ball rolling when he abandons Adriana and his son Tadeo on Barbara’s doorstep. The women are off to a rocky start, but through the course of the series, they’ll realise that they’re stronger when they stand together.

Childhood friends-turned-sweethearts Julian and Lucrecia have grown up knowing that they’ve found true love. If their families have their way though, they’ll be torn apart forever. Lucrecia’s father Paulino owns the El Milagro estate, and he’s good friends with Julian’s father Rodolfo, their town’s school teacher. Julian’s proud and spiteful mother Justina meets her match in Lucrecia’s mother, Rosario, who shuns her daughter and dotes on her son, Cesar. That’s until Cesar dies in a tragic accident and Rosario blames Julian and Lucrecia. The latter is sent away from home, and Julian grows up wild and rebellious. When these two meet again as adults, their spark is rekindled.

Also on Family this October

Fresh, fun October on DStv Premium, Compact Plus and Compact

Check out the other highlights packages for more on these shows, which you will also be able to watch this October