What to watch on DStv Premium in October 2022 | Highlights

Looking for something to raise your spirits? The Flight Attendant and Ghosts are back on DStv Premium this October! 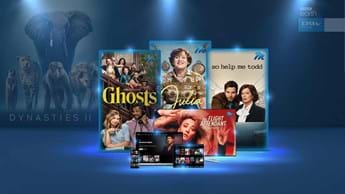 There’s something in the air. Is it a plane? Is it a ghost? Is it a delicious scent coming from the kitchen? It’s all of these, and excitement, too.

DStv Premium’s October shows are bringing you drama with laughter, a maze of plot twists, and some old, old, old friends…maybe, even a dinosaur. You’ll meet Julia Child, Flight Attendant Cassie’s doppelganger, and a houseful of spooks.

Are you ready to have some fun? Because there’s more. When Universal+ launches on DStv this October, it’ll be yours at no ex cost. It includes Box Sets of all the best shows from Universal TV (DStv Channel 117), E! Entertainment (DStv Channel 124), movie channel Studio Universal (DStv Channel 112), kids’ channel DreamWorks (DStv Channel 304) and Telemundo (DStv Channel 118). You’ll also be able to stream current content from all these channels. Go to Catch Up on the DStv App or connect to Explora and select Universal+.

All treats, no tricks: October on DStv Premium

The lighter than air thriller-comedy is taking off again with a new genre onboard – the spy caper. Recovering alcoholic and risk-addicted flight attendant Cassie (Kaley Cuoco) is now working as a CIA asset with her handler, Benjamin (Mo McRae). She has a new boyfriend named Marco (Santiago Cabrera), and she’s attending her AA meetings like a champ… and discovering just how much she hates herself. While she has a target under surveillance, Cassie sees a woman who looks just like her, Grace (Mae Martin), and she starts spying on her off the books. Is someone is trying to frame Cassie for murder again? PS: Kaley’s sister Briana joins the cast as Cecilia.

Sir David Attenborough narrates this BBC Natural History Unit series. It is filmed intensively with production crews, who spent two years in the field with each animal species. Dynasties takes us inside the daily lives of animal families by weaving their stories as if they’re the lead characters in drama series. This season, we follow Angelina the elephant matriarch, Kali the cheetah mom, Rupestre the puma mom, and Suma the spotted hyena matriarch. We’ll see what happens when Angelina has to raise twins, who need 10 litres of milk per day – each.

So Help Me Todd

Margaret Wright (Marcia Gay Harden) is at her wits’ end with her slacker adult son Todd (Skylar Astin). That’s until she hires him as her law firm’s in-house investigator in this light-hearted legal dramedy. As they work together, Margaret comes to appreciate Todd’s ability to improvise. She also admires his tech abilities and sniffing out information. Although Todd might have lost his original PI’s licence and was sent to jail for his “flexible” interpretation of the law, that’s a skill Margaret can respect, too. The series’ producers include father and son Phil and Jay McGraw (yes, that Dr. Phil).

The haunted house comedy series is back from the dead! Husband and wife Samantha and Jay Arondekar have finally turned Woodstone Manor into an enticing B&B. When the season starts, they’re ready (with their ghostly friends) to welcome their first guest… uh, kind of. There are some technical issues, like the floor not working. We’ll explore some of the ghosts’ mysteries, including how Alberta died, and the producers have promised us a dinosaur as well as series superfan and actor Mark Hamill, so fingers crossed!

NB: We finally get to see the original UK version of the series this month! Watch Ghosts Season 1 from Friday, 7 October at 20:35 on BBC Brit (DStv Channel 120) and see the Compact highlights for details.

TV chefs from Nigella to Gordon Ramsay can thank the original charismatic TV chef, Julia Child, for inventing most of the things that make cooking TV so deliciously entertaining – even if you’re more of a microwave dinner person. This light drama series explores how Julia (Sarah Lancashire) turned her lovingly researched book called Mastering The Art Of French Cooking into a long-running TV series, The French Chef (1963-1973). It’s a fascinating look at the technical side of making TV, a loving couple making their own rules, overcoming sexism, and the sheer joy of cooking that Julia brought to her show.

Also on Premium this October