Demo & Reno your ideas about HGTV

All lookalike couples and lookalike designs? Nope, there’s so much more to see on HGTV, on DStv 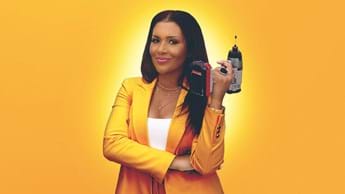 Have you ever thought that even a caveman could spot a “typical” HGTV show: Designer blonde lady make house pretty with shrill complaints; husband, dark hair man, fix house with big hammer. In all their pictures, this demo & reno couple are dressed like they've just come from a church inside a fitness centre. And what do they design? Open concept all-white kitchen, big entertainment area because we know you love to EnTErTain, white sofa, white rugs, white fireplace, white brickwork. Maybe grey for a treat, a homeopathic dose of blue if you’re a circus clown who can’t live without colour.

It’s easy to rag on HGTV’s design shows, which is what happens when you’re a victim of your own success. In August you can watch exactly 100 episodes of the hugely popular Flip Or Flop, across 5 different seasons, with the blueprint for HGTV’s designer vs construction (former) husband vs wife team – Christina Haack & Tarek El Moussa. You can also see somewhat similar looking couple Dave and Jenny Marrs in 3 different series on the channel in the same month: Diamond In The Rough, Fixer To Fabulous and Fixer To Fabulous: Welcome Inn. And you can see 44 episodes of Mash Up Our Home with looky-likey Kele Dobrinski and Christina Valencia. And there are more eerily similar couples, like Jon Knight and Kristina Crestin of Farmhouse Fixer…

But there’s really so much more to see. HGTV is filled with shows and designers who not only break the mould, they grind it up and turn it into a nice decorative planter. Here are 5 nothing-alike designers and shows you can watch on HGTV in July and August…

Design with a difference

Why The Heck Did I Buy This House? Season 1

Kim Wolfe, winner of Survivor of Survivor: One World (2012), helps homeowners whose houses are making them miserable because the space is just blah and nothing works. A far cry from the all-white house designers, Kim is crazy for colour and she’s on trend with wallpaper. She also pays attention to what clients ask for instead of overriding them and producing the same design over and over (who’re we taking a jab at here? Take a guess). There is a husband with a moustache in the mix, but he is there to swing a calculator, not a hammer.

Watch Why The Heck Did I Buy This House? now

Single mom Paige Turner (former host of Flip Or Flop Nashville) uses her real estate savvy to help would-be flippers who’ve gotten in over their heads to rescue their houses, give them the look they need (which yes, is a little samey, but she is really clear about why), and find those buyers…for a cut of the profits. Paige is no-nonsense and she and the show are honest about when things aren’t working out, and how easy it is to lose money, so it’s a great show for learning from other people’s mistakes in the housing market. Just don’t watch if you love period architectural detail because the flippers generally rip these right out. Ouch.

Jennifer Todryk was such a smash hit with her design ideas as theramblingredhead on Instagram that she landed her own HGTV show. She’s someone to watch if you’re just starting out and trying to decorate on a seriously tight budget (which is surprisingly rare on the channel)… and just don’t want to go smashing your home to bits, or really don’t want an open concept, but still want to give it a fresh look. We will admit that things kind of end up being painted white a lot, though. PS: There’s also some major perving going on about one of her contractors, Tony Taveras. Enjoy!

Carmine Sabatella and Mike Pyle are married… but not to each other, despite that great chemistry. Carmine is an estate agent and interior designer, while Mike is a landscape designer, which means we actually get thoughtfully designed outside spaces in the show! Just watch out, because the guys have unexpected budget overruns so often that it feels a little like it’s done for the drama (although they cover so much ground renovating that it’s bound to be expensive), and prepare to fight Mike about some of his choices taking out existing plants.

Twin sisters Leslie Davis and Lyndsay Lamb come to the rescue of homeowners who are desperate to sell their bleh homes. And in the Pacific Northwest Housing market, there really has to be something wrong if it’s not already sold for a stupidly high price! Prepare to tut at the sellers sometimes, like the messy ones who didn’t even bother cleaning up rubbish in the house and yard while trying to sell! This is another of the rare shows where budget actually seems to be a real consideration, and the sisters are imaginative when it comes to how awkward spaces could be reimagined and used differently. Prepare to be covered in cushions and baskets.

Mina and Karen of Good Bones will also give you bang for your colourful and innovative design loving buck, while Jasmine Roth of Help I Wrecked My House, and Hidden Potential, is great at working on those contingency budgets with homeowners.

HGTV (DStv Channel 177) is available to DStv Premium, Compact Plus, and Compact customers. To upgrade your existing package, click here. Or if you'd like to Get DStv, find a service that suits your needs here.