No greater insult than a mirror! 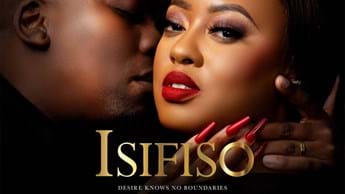 The battle lines are drawn in blood in new sibling rivalry drama, Isifiso.

Sisters Bazothini (Nelisa Mchunu) and Nobuhle (Mbalenhle Mthembu) grew up in the same house, but they did not have the same mother. Oh, MaNgobese (Dudzile Ngcobo) gave birth to them both, but she had (and still has) two faces. For older sister Bazothini, mother is harsh, exacting and judgemental, while Nobuhle’s mother is encouraging and filled with praise. Why? A child does not ask.

You’d think that grown-up Bazothini would hate her mother. Instead, there’s nobody whose approval and love Bazothini craves more… and all her seething hatred, envy and resentment is directed at Nobuhle. If Bazothini could just have Nobuhle’s life, her car, her husband, her job, maybe MaNgobese’s love would shine on her, too.

We spoke to Miss Jealousy herself, Nelisa, about playing this bitter little apple from a poison tree…

Who is this woman who’s so jealous of her sister?

Bazothini is something else. Her biggest conflict is that she is envious, and the reason is that their mother MaNgobese favours Nobuhle. Nobuhle is doing well for herself, and she married rich, whereas Bazothini married a man who doesn’t have money. They (Bazothini and her husband) live in her parents’ house. The mother looks at Bazothini as a failure, which creates animosity towards the sister.

Why does her mother’s opinion matter so much to her?

The mother is a very strong figure in the family. Bazothini has a great relationship with her father, and they get along well. But you know when someone doesn’t like you and you try so hard to make them like you? That’s the predicament which Bazothini finds herself in. You can’t explain why that person’s opinion matters, but it does. Bazothini grew up feeling inferior because her mother would tell her that she isn’t worthy, so she seeks to make her mother happy.

At the beginning of the show, Bazothini works so hard at the local supermarket, and she gets a promotion. For a moment, Bazothini is thrilled but later, Nobuhle drives into her parents’ home with her husband’s new car, and everyone forgets about Bazothini’s achievement. She always needs to prove to her mom that she can do just as well as Nobuhle. Bazothini’s mother never applauds her, and she feels like she needs to do The Most to be seen.

Exactly. MaNgobese sees her life in Bazothini. She thought that she was going to have an amazing life, but she married Bazothini’s father and after they got married, his promises fell through, and they struggled financially. She resents the father and takes it out on Bazothini. She sees the failure she is in Bazothini, which is why she is so hard on her. And she is living vicariously through Nobuhle. A lot of people will relate to the storyline, this is a real issue that many go through.

What has Bazothini and Nobuhle’s relationship been like, from childhood to adulthood?

When they were younger, they got along but there was always that competition. There is a scene where Bazothini recalls an incident in which they were younger and wearing the same dress and Nobuhle received all the compliments. People didn’t even pay her any attention and she looked good, too. There was always competition between them and as they got older, it escalated. Bazothini loves her sister but there are issues she’s never dealt with because she feels inferior.

What pushes Bazothini to the edge is that she has all that bottled up anger towards Nobuhle, “You were always told that you were beautiful and that you are better than me, and you didn’t stand up for me,” (Nelisa recalls a quote). The sister probably likes the attention, but she didn’t know how to react to being the Beyonce of the family. Bazothini has all these emotions towards Nobuhle that makes it hard for them to be close and build a healthy relationship.

How would you describe the interactions between Bazothini and MaNgobese?

She clearly doesn’t have time for Bazothini or pay her any mind. Because MaNgobese thinks Bazothini is a failure, the husband (Mhlengi, played by Ntando Mncube) falls into the category of being a failure. Bazothini’s husband is compared to Nobuhle’s husband (Sibonelo, played by Melusi Yeni) and the former falls short, majorly. Bazothini’s child also doesn’t get attention and care from MaNgobese. Their relationship is strange as MaNgobese kicks her down, always. After Bazothini’s circumstances changes later on, you see the switch in MaNgobese’s eyes, and you can see that it’s because of the material things that Bazothini has acquired. It will also show you that Bazothini and MaNgobese are similar. At some point, they start plotting together and you’ll think: Bazothini is crazy, but she gets it from the mother, without giving away too much. Bazothini is her mother’s child.

How did your audition go? South Africa knows and loves you from playing a funny character (Fikile in Uzalo).

It was unexpected. I auditioned for Julia (Sibonelo’s mistress, played in the series by Zinhle Mabena), and they called and asked that I audition for Bazothini. Since COVID, we do self-tapes. I did that, sent it to my agent and the next week I was asked to read for Bazothini. And the next day, I was told that I got the role!

The story is relatable. Maybe not the murderous part – but of course there has to be drama, darling. Someone out there has a friend whose friend is envious of their lives, like she is of Nobuhle’s life. Or there’s a MaNgobese, who has a favourite child and doesn’t even hide it. Poor Mhlengi is told that he is nothing because he doesn’t have money and he uya’lobola Bazothini with one cow! You will feel like you know these characters and their stories. I love the story so much and I hope that viewers love it just as much as we do.

Mzansi Magic (DStv Channel 161) is available exclusively on DStv Premium, Compact Plus, and Compact. To upgrade your existing package, click here. Or if you'd like to Get DStv, find a service that suits your needs here.