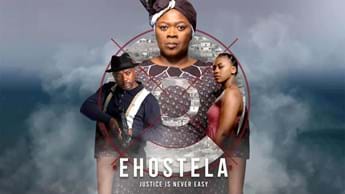 Welcome back to eHostela – a kingdom crammed into a large apartment building with its own deadly underworld laws – where the knights are the izinkabi, hitmen whose work brings the hostel money and power. This season takes us to a new hostel, KwaDukuza, where the “king”, the induna, is dead… and the battle for the throne is about to draw blood in a brutal power struggle.

Smotoza (Nkanyiso Mchunu) the inkabi finds himself caught up in the clash. He’s the nephew of one rival for the throne, Ngwadi (Siyabonga Twala). And he’s the lover of Thando (Siphelele Luthuli), daughter of KaMabizela (Gcina Nkosi). KaMazimbela is hell bent on justice after Ngwadi killed her husband, Mdletshe (Mpumelelo Bhulose), Ngwadi’s former ally who was poised to become induna.

Now Nkanyiso reveals what he had to do as his own “initiation”… inside KZN’s Delton hostel, where he lived in preparation for the role.

What’s Smotoza’s biggest conflict when we meet him?

He is finding himself as a man. When the series begins, he is initiated into the hitman brotherhood. He was raised in a hostel, where everything was done for him and now, he needs to stand on his two feet. The only person he considers family is his uncle, his late father’s brother. He yearns for a sense of belonging, and he is conflicted because he doesn’t know if he wants to be inkabi or if he is doing it to get his uncle’s approval.

Of course. It’s something that you can’t take back. When you get initiated, you are required to kill someone. You can’t reverse that. Once you pull that trigger, you are immediately sucked in, even if you realise further down the line that this wasn’t that job you wanted. You can’t undo killing someone.

How would you describe his personality?

He puts on two different faces depending on who he is with. When he is home, he is cold-hearted, because that’s what his uncle wants to see, and when he is with his friends, he is a good guy. That’s acting within acting! It’s been exciting to do that as I have had to work hard to play this character. Smotoza wants to impress others and does things so that people can accept him, but he later realises that his helping ways aren’t tricks to get him accepted. He is a normal guy, likeable and he enjoys joking around but his uncle is a mafia, so he is expected to do bad things. Eventually, he wants to make the hostel a better place.

What is his role in the world of the inkabi?

He is nervous from his first kill, and he has never gotten used to it. What’s different with him is that other people had a choice of whether they wanted to be part of this Brotherhood or not. He was expected to do this. It is expected to be the best there is, he is practically the boss’s son. On the other hand, he likes the attention that comes with being inkabi. They carry guns and they are feared in their community. They are liked by women who are into “bad guys”. He mistakes being feared as being respected but he doesn’t like what he has to do to maintain all that comes with being inkabi.

What was it like getting into character? Did you consult with real-life inkabi?

No, I am scared of them! When I was offered the role, I went to stay with a friend named Gadhafi Hlongwane – only to find that Smotoza’s surname is also Hlongwane. I lived in Delton (the real-life Delton Hostel in KZN) until we started filming because I had to change my accent and the way I walked. I wanted to take Smotoza as far away from the character that I’m known for – a guy in suits, a CEO kind of guy (Nkanyiso is best known as Nkanyiso in Imbewu). I wanted to take him far away from that. I would eat with ínsízwa (the young men). They would tell me: “They close the kitchen at 19:00 and if you don’t eat before that, you won’t eat.” I went with method acting with this character, and now it’s like I belong there.

What did you learn about the inkabi world from being a part of the show?

I’m learning so many things! Because you pledge or take an oath, you can’t back out of an order. If they send you to kill a family member, you have to do it, if you don’t, they’ll send someone else to do it and they will kill that person and then kill you for refusing to complete the mission. Sometimes, they do things even if they don’t agree with them. You’re like a solider, you don’t ask any questions, you just pull the trigger. You can’t ever trust anyone. You might think that someone is your friend but once a hit is out, they will go ahead and kill you. It’s a lonely world. If they order a hit on someone, you have to commit.

How does Smotoza differ from you?

He doesn’t know himself, and I’ve taken time to know myself. Growing up, my mother would call me Prince of AmaChunu. When I was older, I started asking questions about this prince, only to find out that she comes from a royal family. And (as an actor) I had to study myself, which Smotoza is missing. He is easily swayed, and he’ll do something because someone told him to. He is easily convinced and easily pleased and I’m not like that. Our similarities are that we care about our loved ones. Once we have opened up our hearts to you or our circle, we would go through any measures to protect you. I admire that about him and that’s what I relate to.

Why is eHostela season 3 worth the watch?

We have fresh talent, a breath of fresh air. There’s blood, guns, love, and tears. Our comic reliefs are amazing. And you’re going to see talent that you haven’t seen onscreen in a very long time. One thing about actors is that when they haven’t been on a TV show in a while, they come back hungrier and more focused. It’s going to be exciting.

Mzansi Magic (DStv Channel 161) is available exclusively on DStv Premium, Compact Plus, and Compact. To upgrade your existing package, click here. Or if you'd like to Get DStv, find a service that suits your needs here.