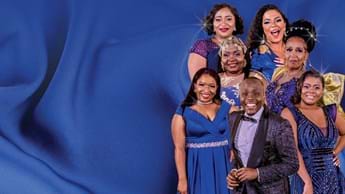 The reality show reunion viewers have been waiting for is finally here in a thrilling two-part ending. HONEY TV’s Pastors’ Wives show is set to premiere its reunion special on the 17th of March at 16:30 PM (Part 2 on the 24th) on HONEY ( DStv Channel 173). The popular reality show wraps up its second season after introducing Judy Ranoto, Noluvo Duna and Tshidi Motlhose as new cast members. The women joined Nandipha Mlombi, Phume Khethang, Adeola Costa Ayo and Anietie Ezeimo. The show follows the lives of women who are the leads in their religious households. We see the drama, fights, reconciliation and fun that comes with being a pastor’s wife.

Gospel star, Khaya Mthethwa has been cast as the host of the reunion. The popular singer, SA Idols winner, and pastor has been a gospel fan favourite for well over a decade. Mthethwa is tasked with guiding the conversation about all the drama that happened throughout the season. The show has been a constant trend on Twitter with fans commenting on the constant sly comments by Adeola, Phume’s unconventional life choices and Tshidi’s eccentric personality.

The highlight of the season has been the unspoken feud between Nandipha Mlombi and the rest of the wives. Mlombi has been a fan favourite as one of the most open, honest and controversial wives on the show. She infamously butted heads with Phume Khethang early in the recent season.

The reunion promises all the revelations, dramatic conversations, and a possible reconciliation.

Watch Part 1 of The Pastor's Wife Reunion on 17 March and Part 2 on 24 March at 17:30 PM on HONEY(DStv channel 173). Don't forget to follow Honey on the socials using @honeyafricatv

HONEY (DStv channel 173) is available on DStv Premium, Compact Plus and Compact. To upgrade your existing package, click here. Or if you'd like to Get DStv, find a service that suits your needs here.