Super viewing on SuperSport for everyone | News | DStv

Super viewing on SuperSport for everyone.

From Premium to Access, everyone is getting full SuperSport access in late October with the DStv app.

Calling all DStv customers subscribed to Compact Plus, Compact, Family, Access and EasyView packages – from Saturday, 24 to Sunday, 25 October, MultiChoice Group is opening all SuperSport channels for you to stream all weekend via the DStv app (previously known as DStv Now)

That’s right – all weekend long, more DStv customers will have access to SuperSport content that is exclusive to DStv Premium.

During the nationwide lockdown, DStv opened its Premium-exclusive content to a wider pool of its customers through Open Window viewing periods. Now, this open window comes as soccer fans ready for the kick-off of the DStv Premiership on Saturday, 24 October 2020.

DStv was announced in September as the title sponsor for the Premier Soccer League in a five-year deal beginning in season 2020/21. DStv will be opening the full spectrum of SuperSport channels to more of its valued customers from 24 to 25 October to celebrate the start of the new season.

Although many eyes will be on soccer, the additional access means that more customers will also experience an incredible line-up of other sports including Vodacom SuperRugby Unlocked, New Zealand’s Mitre 10 Cup, PGA and LPGA golf, Formula 1 and the Giro d’Italia.

“‘Babize Bonke’ is not just a tagline, but rather our clear intention to rally many more South Africans around local soccer on display in the country’s top league. Through our ‘Open Window’, we are calling and inviting sports-loving South Africans to enjoy the games with us across our diverse platforms, accessing the best in local and international sports content through our SuperSport channels,” says CEO of General Entertainment & Connected Video at MultiChoice Group, Yolisa Phahle.

How to score with DStv & SuperSport

If you have the DStv app on your device, log in and check out any one of SuperSport’s 24-hour themed sport channels – it’s that easy!

If you do not have the DStv app, it’s still easy! Simply go to the app store on the device you want to stream DStv on. Type ‘DStv’ into the search bar and hit install. The DStv streaming app is available to all DStv customers* on iOS and Android.

Please note we have renamed DStv Now to simply DStv. If your app hasn’t auto-updated on your device, please visit your preferred app store to update your app and ensure that you have the latest version for the best streaming experience.

For more information on making sure that you have the latest DStv app click here. 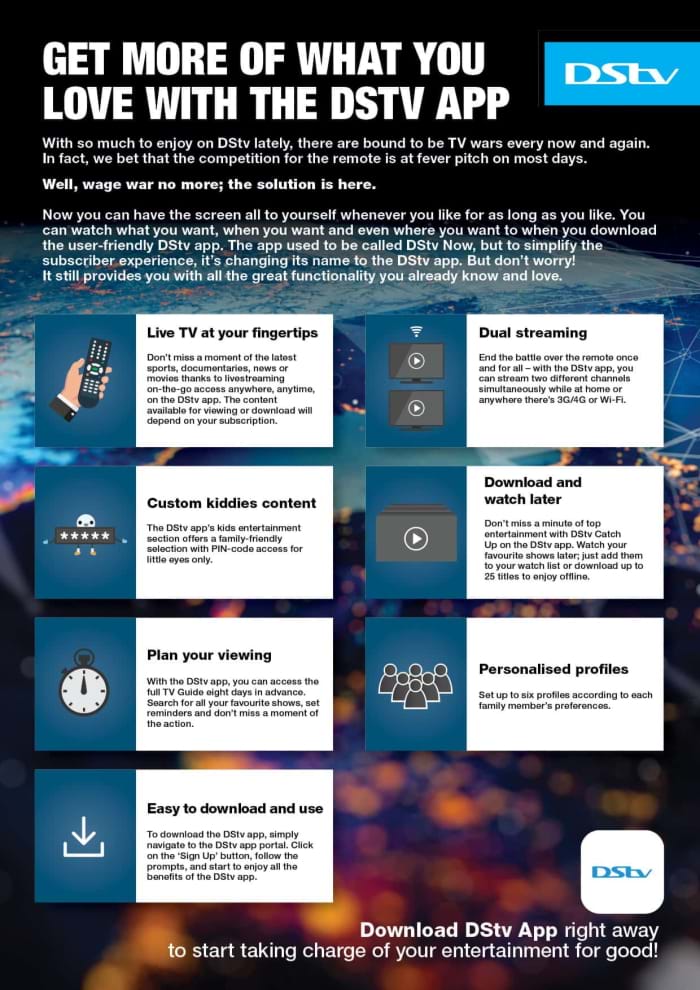 No doubt you’ll be hooked on SuperSport’s extensive offering after this open weekend! To keep the action going all year long, upgrade your DStv account to enjoy more sport, more often.

Upgrading your DStv account is easy. Simply click here, compare our awesome packages and select the one that works for you. Then, fill in the form at the bottom of the webpage and we’ll get back to you. It really is that simple.

Who’s on the leaderboard

Here’s some of the sport you’ll be able to stream to your mobile device on Saturday, 24 and Sunday, 25 October on the DStv app:

Football fans will also be able to stream these matches (days and times still TBC):

Sign up with the DStv streaming app, a free service for all DStv subscribers. With the DStv app, the same channels you watch on your decoder at home are available for you to stream online PLUS all of the SuperSport channels on 24 and 25 October.

Help 01 May 2021
Getting started with DStv streaming