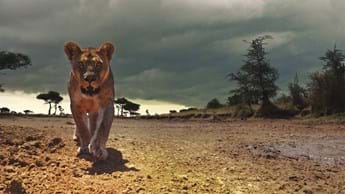 The lifestyles of the wild and hairy come centre stage from Sunday, 14 November on BBC Earth (DStv channel 184) with nature doccie Serengeti, season 2. The series’ executive producer, John Downer (creator of the brilliant Spy In The Wild series), is back at the helm. And as well as welcoming back the big characters from season 1, we’ll meet some new and exciting animals in this season’s “cast”.

“What's driven me throughout my career is to tell stories about animals and to reveal their behaviour, but from their perspective,” says John. “All of the series I've made, have built towards Serengeti. I had all the tools and the methods of filming at my disposal, and suddenly I was able to tell quite epic stories, but intimate stories as well.”

We asked John a little bit about how Serengeti season 2 was made, and as you’re about to find out, Africa’s finest and fiercest furry friends are “people”, just like us…

Are all of the animals legitimately the same animals throughout the season or did you need “stand ins”?

Most of the time they are the same animals, and we do say it's dramatised and that gives us a degree of license. But in season 2, if you took the cheetah story, the four cheetah cubs with the mother, it’s the same animal every single time. It’s the same with the leopard cubs. Leopard cubs are almost impossible to film, and we managed to get their trust and get all our cameras in with them and we told this incredible story. In classic Natural History filming, you often miss a lot of their story, their narrative, so we filled in the gaps and occasionally they'll be using different animals to do that. But generally, we're following the same animals and all the stories come out of what actually happens, so it's real behaviour and it's true to their Natural History into their lives.

How did you come up with the names for the animals?

They are Swahili names. They're either the names for the animals themselves…iIf you take Duma, that's a cheetah in Swahili. But often it's to do with their character. In Swahili, names have meaning and we apply that to the character of the animal and that becomes the story.

Who were your favourite characters?

My favourite characters are the baboons because they're the most human-like. Troops are constructed almost along royal lines, so there's a hierarchy within that, that is relatable to human society. Their individual wants and needs, and jealousies and rivalries and everything, you can find in human life. So they were a gift.

How do you deal with not getting involved when one of your “cast” is in danger?

It's difficult, but you do know that if you try to interfere, if it's an animal praying on something else, you're taking away that animal’s meal. Particularly the young ones, it would be an absolute tragedy if they got killed because you're so emotionally connected with them, but you can't interfere because if you did it would be trying to change the balance of the ecosystem.

How have you used new tech tools?

There are new developments each day for cameras and lens drones. Because the technology is going at such a fast rate, what was impossible two years ago is now possible. We have cameras that could move and travel with the animals and It's been an absolute game changer. It's a very exciting time in filming Natural History.

How do you get the stories right?

Telling animal stories is vastly different from telling human stories. You can't write the script for animals and then follow it, and that's a big fundamental difference. We do have a storyline to begin with, but it's based on expected behaviour. Sometimes you tear that up as you start filming because nothing goes right. The animals are writing our story.

What was one of the most absurdly human things that you saw an animal doing?

The most unexpected thing involved Bakari the baboon. He got trapped up a tree by lions and he would wait for them to go to sleep to creep down the tree and (he was) continually checking to see who's awake and who isn't so that he can make it to escape. If you or I were trapped up a tree surrounded by lions, we’d be doing exactly the same, so you really empathise.

BBC Earth (DStv channel 184) is available on DStv Premium, Compact Plus, Compact, Family and Access. To upgrade your existing package, click here. Or if you'd like to Get DStv, find a service that suits your needs here.