Coming up on Binnelanders this September | Watch it on DStv

Drama from the heart in Binnelanders this September 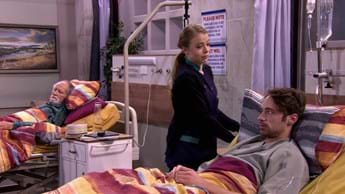 There is never a dull moment at Binneland Clinic in Afrikaans soapie Binnelanders on kykNET (DStv channel 144). The latest gossip in the halls of the hospital this September is about the difficult patient Liam (David Viviers) who is giving his carers all kinds of problems and creating drama with his nasty mood swings and manners.

Doc Steve (Clint Brink) doesn’t need any more hassle! He’s having a hard enough time as a single parent since his fiancée Elana’s (Ilne Nienaber) death in July 2021, and he desperately needs a helping hand. And while Janneke Stuurman (Roeline Daneel) is willing to come to his aid, does she want more than just friendship from Steve?

Plus, everyone’s favourite medical rep, Elise (Lindie Stander), is back in Pretoria and this time her main goal is to get Doctor Annelize (Cindy Swanepoel) a man. Is she only going to cause more harm or actually help Annelize into the arms of her next big love?

Here’s what we can expect this month…

A new lease on life

Patient Liam, who lost his leg in a hiking accident six months ago, has alienated every nurse who has attempted to treat his amputated leg because the wound site just doesn’t want to heal properly. Constant infections and abscesses are causing frustration for Liam, who was on his way to become a surgeon and enjoyed an adrenalin-filled outdoor life.

Liam is resentful because he feels the doctors at the time didn’t fight to save his leg and amputated it without his consent. Nurse Karen (Luandri Reynders) makes the bold decision to take care of Liam, and with her soft touch she breaks through his tough exterior.

But Liam is stubborn and mistrusts his doctors when they suggest a procedure that will help him walk again. He is especially cautious of Annelize, who he holds responsible for removing his leg. Will Karen convince Liam to undergo the procedure and get a new lease on life?

FUN FACT: To create the illusion that David Johnson, who plays Liam, had lost his leg, the Binnelanders production team cut a hole in the bed where he could put his leg through, and created a special prosthetic that slid over his knee to act as the amputated leg. The make-up and art department then created the abscess on the stump. The rest was done via clever camera angles and tricks.

It’s not easy being a single parent, and Steve knows how hard it is to care for his adoptive children, Ruan (Caiden Bouwer) and Vicky (Roxanne Bornman), his late love Elana’s nephew and niece. He needs help and that is when Vicky’s best friend Charlotte’s (not onscreen) mom, Janneke, steps in to lend a helping hand.

Janneke is a recently divorced single mom. Like Steve she is a doctor, a GP, and she knows the struggles he is facing. She helps a lot with the kids at school and pops in at the house from time to time. This angers Lexi (Kisha Skeï), Steve’s daughter, who is also Ruan and Vicky’s au pair. Expect fire when she confronts Janneke and warns Janneke not to make a move on her dad while he is still grieving.

Janneke is mortified by Lexi’s assumptions, but does she maybe in harbour secret romantic feelings towards Steve?

Elise is back in Binneland and rather than focusing on her newest medical gadget to sell to the hospital, she wants to be Annelize’s matchmaker. She soon spots some eligible candidates who could be Annelize’s partner.

Doctors Xander Stassen (Ivan Botha) and Stefan de Vries (Izak Davel) are going to rock up in Pretoria and both have had their eye on Annelize in the past. Then there is Annelize’s best friend and co-manager of the ER, Doctor Tertius Jonker (Reinardt Hugo), who might just stand a chance to win her heart.

Three doctors, one heart! Who will win this operating room battle? Don’t miss all the drama and intrigue.