Here are the finalists for this year's Savanna Comics' Choice Awards

It has been a record year for The Annual South African Savanna Comics’ Choice AwardsÒ with a massive spike in entries.  As many as 272 South African comedians are vying for one of the 10 awards, whilst 53 entered from the continent to be crowned the Savanna Pan-African Comic of the Year.  There were 17 comedians honoured in the Lifetime Achievement category.

There is also great excitement about the new category that’s been announced, The Comedy G Award. Launched to celebrate the stalwarts of the industry, it recognises the comedians who produce great comedy night after night; the ones who simply grab the mic and work the room. There is an element of luck in getting exposure as a top comic, talent doesn’t always get you to the table – the Comedy “G” is a reminder of the giants whose shoulders the lucky few get to stand on.

The nominees were announced at a press lunch at The Goliath Comedy Club on 11 July to media, industry and comedy supporters, but we’ll have to wait to see who’ll leave with the Waldo at the main awards event on 8 September at The Lyric Theatre.

And the nominees are:

SAVANNA NEWCOMER OF THE YEAR

#ER Comedy What What

THE SAVANNA COMIC OF THE YEAR AWARD

THE SAVANNA PAN-AFRICAN COMIC OF THE YEAR

It has always been the awards’ vision to go beyond South Africa and open the borders of the local industry to the comedy family on the continent. There may be many languages spoken in Africa, but it is the language of humour that connects us all.

With the support of Savanna, the vision became a reality last year with the introduction of the first ever Savanna Pan-African Comic of the Year Award.  Now celebrating its second year, there was a great increase in the number of registrations, up from 29 in 2017 to 54 comedians this year: from Ghana to Kenya, Nigeria to Zambia, Angola to Lesotho and a host of other nations, all connected through comedy.

This year’s nominees are:

To assist these nominees in striving for victory, Chatz Connect has decided to gift them each with a superb Huawei P20 handset. What does this mean? They can shoot footage good enough to put on TV, and voice notes good enough for radio.  So if they create a plea for votes and 1Magic and Kaya FM like them, they will help them get the country voting for them by flighting their content.

Vote by texting the nominee’s unique code to 45757. You can vote up to 50 times.  Each SMS is charged at R1.50 and errors will be billed. Free minutes do not apply.

This year’s prestigious Lifetime Achiever Recipient Award goes to Pieter-Dirk Uys for his invaluable contribution to the industry over the last 40 years. You’d be forgiven for not recognising him in the street, even though he is the person behind the most famous white woman in South Africa, Evita Bezuidenhout.  A man whose work as a political satirist cannot be ignored, he is one of the few people that risked, through comedy, speaking the truth to those in power.

Pieter’s “Grilling of a Lifetime” will take place in September, during which he will be affectionately poked in the ribs by his peers.  A comedic approach to celebrating the life and work of the artist, it is the ultimate acknowledgement a comedian can get.  Keep an eye on social media for the details. 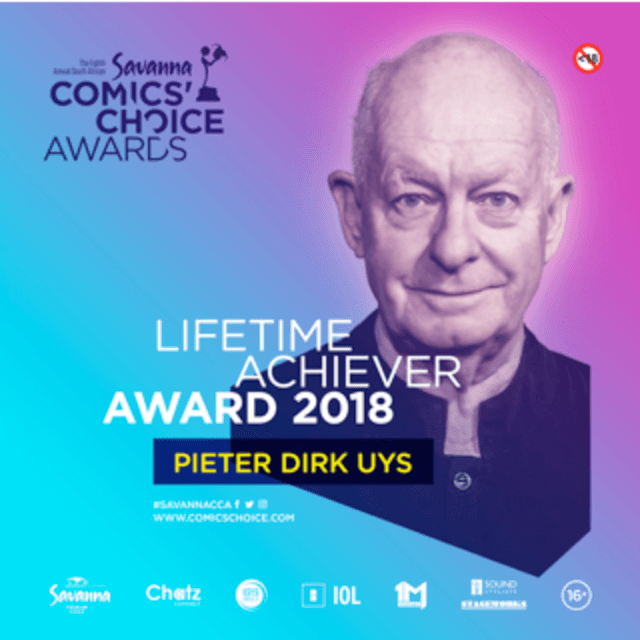 The Savanna CCA’s take place on Saturday 8 September 2018 at The Lyric Theatre at Gold Reef City.  It’s dazzling, it’s premium and it’s a star-studded night of hilarity. This year the theme is ‘the Rhythm of Funny’, so expect both music and comedy, with a special focus on the delivery of lines by rhythmic masters of stand-up.  There are only a few tickets on sale to the public, get yours here: http://bit.ly/2s9ZcNk.The dress code is “glamorous with a touch of music”.

Issued on behalf of The Savanna Comics’ Choice Awards

Video
Multichoice introduces the Enriching Lives Award – DStvMVCA
This year, Multichoice is sponsoring a special award. The Enriching Lives Award will go to a regular individual who selflessly works for the benefit of others. By nominating somebody, you stand a chance to win a cash prize, and the winner of the award can win even MORE. To get nominating, simply follow this link: https://bit.ly/39NwP0S
Video
What's going on here?! - The River
After being angry at Andile for telling Lekau their intimate marriage business, Njabulo then decides that they should maybe give it another go and see what happens instead of giving up but that ends badly when Zweli and Tshabalala catch him holding hands with someone. On the other hand, Mlilo isn't winning at trying to make the family accept Beauty and has now been chased out of the house.
Video
The 15th South African Film & Television Awards Call To Vote
You can now vote for your favourite TV Soap or Telenovela by dialling 12032020# and follow the prompts. Voting closes on 19 May 2021!
Video
Trevor Noah Hosts the 63rd Grammy Awards
Catch South Africa’s very own Trevor Noah on the Grammy Awards stage, airing live on 1Magic on 15 March at 03:00. The repeat will be at 20:30.