News
12 October 2021
WHAT A WOW! That’s the article… Well it would’ve been if you didn’t give us so much content on the socials to talk about! Let’s get into your tweets and comments from Season 17’s Showstopper episode!
Subscribe to watch

First thing’s first, we take our hats off to the Idols SA production team at-large for their impeccable work on this season’s Showstopper episode! Online judges were impressed with it all! Just search ‘@IdolsSA production’ on Twitter if you don't believe us!

But ur production guyz wow 🥰🥰👊👊 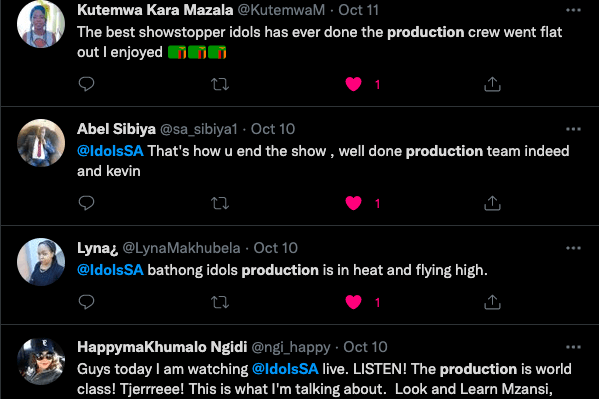 Top7 made their Showstopper debut with 'Osama', a track by the ever so talented Zakes Bantwini and Kasango! Purely prolific!

You know of sailors knots correct? So what better way to send our finalists off sailing the Top 7 seas than ‘Bopha’ as the opening performance song!? The popular amapiano song was signed, sealed and delivered by Felo Le Tee and Mellow & Sleazy and it was tight!

@IdolsSA me i can't dance to save my life but when Bopha comes on ama dance like Jesus is coming back...
💃🤣💃🤣#idolssa pic.twitter.com/FC4nRvNlMB

And then it was finally time to welcome the ever beautiful, talented and legendary Thembi Seete as the Showstopper guest judge! The Twitter streets said SCREAM! Thank you Idols SA fam for giving her the best warm welcome – yes we do need to know what fountain of youth she’s sipping from, yes she was a spectacular guest judge and yes, she definitely deserved all the hype! A fitting showstopper judge for the Showstopper show.

Thembi Seete on Idols SA 🥺❤️ Her character and humbleness... The way she gives fair judgment 😭😭❤️🥺😩 We need her every week man @IdolsSA #IdolsSA pic.twitter.com/aaT0KUs5u3

@IdolsSA must just make @Thembiseete_ a permanent judge... She is giving good, constructive feedback & we could do with this beauty every weekend 😍.#idolssa

On Beyoncé’s internet, you showed S’22kile the utmost love for her effortless execution of Beyoncé’s ‘Dance For You’. She was S’22 Fierce! The judges called it her best performance of the season thus far and you, our online judges agree!

Karabo has proven herself time and time again this season and definitely deserves the R.E.S.P.E.C.T she sang about! Guest judge Thembi Seete said she has pipes and our addition to that fact is, FOR DAYS! The late great Aretha Franklin must’ve been happily hyping Karabo on from her resting place.

Karabo can sing . Like she can sing sing sing !!! No debate . Amazing 💯🔥😎 @IdolsSA #idolssa pic.twitter.com/9pt4z85qpc

Anyone else have ‘LaLaLa’ stuck on repeat in their minds after Daylin Sass’ performance?! For someone that said he can’t dance, he sure brought the moves and as always, brought the vocals! He’s definitely the performer he thinks he is and more.

Guest judge Thembi Seete didn’t allow a language barrier to stop her from telling Berry just how much she adores her! She got an invite to the “cookout” and was encouraged to pursue her other talents as well after Idols SA otherwise, bazoku kwatela Berry!

One thing about Nqobie is that she will take the advice of the judges and apply it to her next performance. This past Sunday, we saw her step out of her comfort zone and dance as she painlessly sang Ciara’s ‘Dance Like We’re Making Love’. Randall has compared her calm and talent to the acclaimed Sade and this week, she’s received a request for a Toni Braxton song choice and we’d love to see it!

Mzansi’s golden boy AKA ‘Mr Liquid Gold’ Kevin Maduna understood the ‘showstopper’ assignment according to you Mzansi! ‘We Dance Again’ hit track by Black Coffee and Nakhane Toure was brought back to glory through Kevin’s performance and he didn’t allow the whole of South Ah to hema (breathe), including Thembi Seete. And that’s how the Showstopper show was concluded – breathtaking.

Season 17 of Idols SA broadcasts on Sundays at 17:30 on Mzansi Magic Channel 161 and 17:00 from the live shows. Get exclusive updates and a behind the scenes look at all the action right here on our website. Don't forget to join the conversation by following us on Facebook, Twitter and Instagram using the hashtag #IdolsSA.

Video
Top 2: S'22Kile – 'Dance For You' – Idols SA
Before the Top 2 reveal on Idols SA, S'22Kile practised this hit from the Showstopper episode. Unfortunately, we never got to hear it during the show, but we DID get to capture this dress rehearsal for you to enjoy.
Video
Karabo 'Respect'– Idols SA
Karabo gives an AWESOME performance of her showstopper song choice, "Respect". And boy, did she earn it!
Video
Top 7: Berry – 'Something's Got A Hold On Me' – Idols SA
Who always seems to come out on top? BERRY! She sang the Xtina rendition of the great Etta James song 'Something's Got A Hold On Me' and proved why she's got such a hold on Mzansi!
Video
Top 7: Nqobie – 'Dance Like We're Making Love' – Idols SA
Thembi Seete called her uManqoba which stands for 'victorious' and we couldn't agree more! Nqobie's ability to adapt to any genre but still remain true to self was evident in this performance of Ciara's 'Dance Like We're Making Love'. Talk about sultry perfection.