News
10 September 2020
The very different Theatre Week meant we got to meet the talented and empathetic vocal coaches, many of whom have experience in reality singing competitions!

Here’s what you had to say about the vocal coaches during the solo round of Idols SA Theatre Week:

#IdolsSA it would be nice to have vocal coaches giving us guest performances yazi. I'm just putting it out there#idolssa2020 @IdolsSA pic.twitter.com/S0ANIGsGw4

Not only beautiful, she's a powerhouse this one #IdolsSA

Well done on choosing the vocal coaches, who can sing 👏👏👏 pic.twitter.com/pnV07xEbX6

We can confirm that two of the vocal coaches are members of Jamali, formed during 2004’s Coca-Cola Popstars. They’re Mariechan Luiters and Liesl Penniken, who had some great advice about the remixed Theatre Week in episode 5: 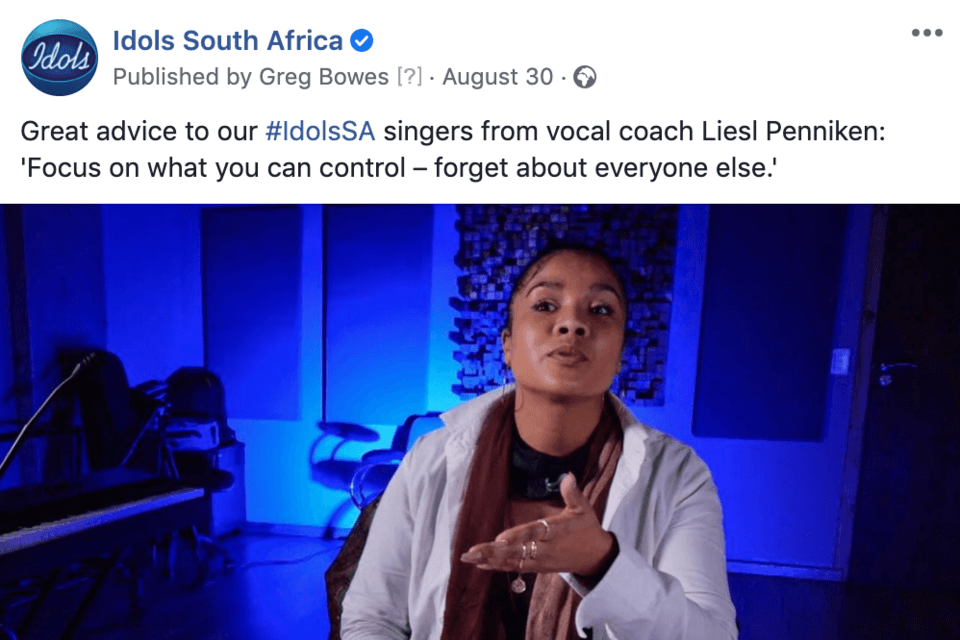 If you’re not aware of Jamali, well: they won a SAMA in 2009 for Best Pop Act, and even you must have heard this number!

Watch the coaches at work in this clip, and then we’ll let you know more:

In 2018, she released the ‘Cherry Blossom’ EP and the single ‘Missed Calls’.

Her former bandmate Liesl Penniken has been less prolific, but she has featured on gospel tracks by Benjamin Dube and Jonathan Dubian, as well as on an EP by Sphectacula and DJ Naves, ‘The Kings Way Vol. 1’. This EP also featured another name that will be familiar to Idols fans: Khaya Mthethwa!

We have another Coca-Cola Popstars winner in the fray: Kurt Herman, who was part of 101, who won in the inaugural edition of the show in 2002 (beating out 8,000 other hopefuls). He’s married to another of our coaches, multi-Platinum R&B artist Tima Reece, whose debut album ‘My Body’s Crying’ was nominated for a SAMA for Best Pop Album in 2003. Together the two run BluBerry Entertainment and have worked with artists like Anatii, Khuli Chana, Mango Groove, and more.

As for the other coaches, let’s have a look.

And Tebogo Moloto is a singer who features on this iconic track by our host, ProVerb!

Season 16 of Idols SA broadcasts on Sundays at 17:30 on Mzansi Magic Channel 161. Get exclusive updates and a behind the scenes look at all the action right here on our site. Don't forget to join the conversation by following us on Facebook, Twitter and Instagram using the hashtag #IdolsSA.

Video
Idols welcomes two idols – Idols SA
By now, EVERYBODY knows that Idols SA has two brand-new judges – Thembi Seete and JR will be joining Somizi at the table! In this exclusive, the three share their thoughts about joining the show, working with each other and their most memorable Idols SA moments. They also tall us what they're hoping for this season.
Video
"Karabo fills up her trolley with Old Mutual" – Idols SA
Thanks to Old Mutual, Karabo got to do some VERY rapid Christmas shopping for her loved ones during her vacation in Cape Town. There are going to be some happy kids this Christmas!
News
The Top 16 Group A voting numbers – Idols SA
We’ve OFFICIALLY got a Top 16 for season sweet 16 of Idols hitting the stage on Sundays at 17:00 – all hoping to get a Top 10 spot!
News
Voting FAQs for season 16 – Idols SA
To make rallying behind your winner as easy as possible we've put all your voting-related issues in one central place!