News
23 January 2023
The housemates were unaware that their nominations were fake, although the audience was in on the secret all along
Subscribe

The dramatic first week in the Big Brother Titans House ended on a climactic note, with Biggie surprising the Housemates with news that no one would be going home tonight.

This was the first time where the phrase ‘all dressed up with nowhere to go’ was a good thing, as Housemates put on their Sunday best in anticipation of someone being evicted. But it turned out that the Nominations from this past Monday were fake, as Eviction Sundays – and viewer voting – haven’t started yet.

It was the second surprise of the evening, as Housemates had not been told who was up for Eviction – a Biggie twist that kept the House on edge all week.

Co-hosts Lawrence Maleka and Ebuka Obi-Uchendu dropped the bomb on who was allegedly up for Eviction during the first official live Sunday show of the season. Those nine Housemates were: Blaqboi, Jaypee, Jenni O, Justin, Khosi, Nana, Olivia, Yaya, and Yemi Cregx.

During the Live Show, Ebuka had advice for all in the House, saying: “If you wanted to be in your comfort zone, you could have stayed home for that. Open yourselves up wholeheartedly to this journey.” 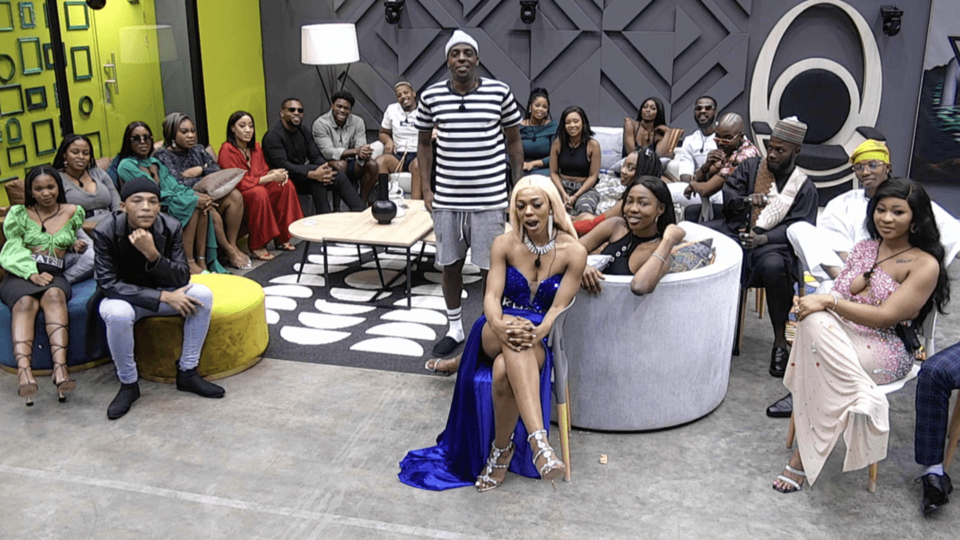 The busy first few days also saw Housemates lose their wager, and therefore, receive a brutal 75% budget cut for next week. Yikes. But their problems didn’t end there. While they were drowning their sorrows during the pool party, Biggie had a surprise for them: the competition was about to get stiffer as four new Housemates joined the show.

Sandra, Miracle OP, Blue Aiva and Theo Traw took the number of occupants in the #BBTitans house from 20 to 24. Winning that US$100,000 Grand Prize just became a lot tougher.

With the first week featuring new cliques, hot gossip, romantic relationships forming and rivalries unfolding, co-host Lawrence said of it all: “This sounds like a telenovela.” If anyone would know, it’s him.

Earlier in the week, Mmeli was elected the first Head of House, in a paper plane challenge that required precision and skill. Reflecting on his week as HoH, he said: “It’s hitting me that I’m becoming the blueprint into doing this thing, and that certain people have to learn from my mistakes and what I should have done. I hope they can learn from me and that I can learn from them, too.”

The coming week will see a crop of new Nominees up for possible Eviction. Who will be on the hit list, and what will be the drama leading up to it? There’s only one way to find out!

Catch Big Brother Titans live, 24/7 on DStv Channel 198 and GOtv Channel 29. It’s also streaming on Showmax in more than 50 territories, including the United Kingdom and New Zealand. Keep up with the conversation with the hashtag #BBTitans, visit http://dstv.com/bigbrothertitans, and follow @BigBroAfrica on Twitter, bigbro_africa on Instagram, and @BigBrotherAfrica on Facebook.

News
Blaqboi and Ipeleng are BBTitans’ ultimate dynamic duo as they become joint Head of House
Pairs Yelisa, Santheo, Juvone, and Juiovla are up for eviction in new twist.
Video
Themba and Mpho Wabadimo on Sunday Sexy Love
Themba and Mpho Wabadimo give us some insight into how they fell in love in the Big Brother Mzansi house and what taking the journey together signifies.
News
Live Show 2: Fake Eviction brings two more Housemates – BBMzansi
The stakes got higher with two more Housemates joining the #BBMzansi House.
News
Live Show 7: Nthabii is Evicted – BBMzansi
And then there were 10. In stark contrast to last week’s Triple Eviction, tonight saw only a single Housemate leave the Big Brother Mzansi House, although we doubt that’s much of a consolation for Nthabii.