News
07 June 2017
All the elements that made up their perfect wedding checklist.
Subscribe

On mission day one, the first two items on their wish list, namely the dres and suit, were ticked off in one fell swoop, as both were created by the same designer and tailor. First up was Sphe's gown. Nomsa was surprised that Nkosana was not stepping out of the room to avoid seeing the bride in her gwon before the big day, only to be told that the couple are such close friends, they broke with tradition and designed the dress together. Sphe initially wanted a mermaid gown, but Nkosana thought a ballgown would be better, knowing exactly wwhat would best suit his bride. After an intense back and forth, they finally decided on a dramatic ballgown skirt and a crystal embellished bodcie with a sweetheart neckline. Seeing how good she looked in her gown, Sphe admitted that the arguments and disagreements between her and Nkosana that had birthed the stunning creation had all been worth it.

While Sphe slipped away to slip out of her dress, Nkosana stepped out in his suit, which was a sky-blue three piece suit with embroidery in the colour sand, as well as a sand cravat. Nkosana explained that the inspiration behind his suit was one he had found on the world wide web, but he had found it too plain, and decided to add some pizzazz in the form of the intricate embroidery on the suit jacket. So blown away was Sphe by her handsome groom in his suit, she struggled to really look at him, admiiting to having the shakes.

The pair and the entourage then travelled to see how the reception venue would be decorated. The couple left it all in the capable hands of Jospeh, whose impeccable work they were familiar with. He presented them with a sample table that had a white table cloth offset with peach and silver elements that the couple had requested. The napkins were peach, some of the candles adorning the table were peach. A silver ice bucket, fresh flower centrpiece in a crystal vase, as well as crystal champagne flutes really completed the look. As beautiful as the guest table was, the couple were really impressed with their sweetheart table, which Nkosana described as "cocostic".

Last on the wish list was the cake, a job they entrusted to Maria, whom they knew from church. She produced a white, four-tiered red velvet cake with fondant draping cascading down each tier, and delicate peach edible flowers. The cake was easy on the eye, and after a taste test, everybody agreed that it was as delicious as it was pretty. 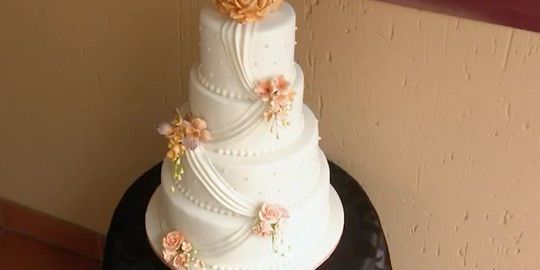 Tune into Our Pefect Wedding to share in more Mzansi couples' love stories on Mzansi Magic, DStv channel 161. Follow Our Perfect Wedding on Facebook and Twitter and join in on the conversation using #OurPerfectWedding.