Recipes For Love And Murder

Colour me pink – Recipes for Love and Murder

If you’ve been watching Recipes for Love and Murder, you can’t have failed to notice the proliferation of pinks and pastels with which the show is saturated. It speaks beautifully to the characters, weaving a thread through their stories and connecting everyone in this sleepy town full of mystery and murder.

Pink is definitely this show’s favourite colour. You see it in the splashes of rose in Tannie Maria’s aprons and dresses, the shocking fuchsia of Candy’s clothing and cocktails (a character whose name and personality bring to mind pink heart-shaped candies), the soft pink of Lawrence’s roses and, most prominently, the pastel pink walls of the Karoo Slaghuis housing the equally pink Gazette office.

Pink’s biggest supporting character is blue. From the police station’s interior to the hotel’s exterior to the hospital gowns and the Tupperware container full of vetkoek, blue acts as complement and contrast to the show’s many shades of pink. In this small-town tale, colour tells a story and may even offer a clue to our murder mystery.

I’m still tryna make sense of the pomegranate juice. was it supposed to be fake blood? #RecipesLoveMurder

If this use of colour in film sounds like a novel concept, you can lower those raised brows. It’s a technique that’s been used to magnificent effect many times before. Sometimes in subtle ways like in Sin City and Schindler’s List: two movies shot in black and white that use splashes of colour in very disparate yet equally effective ways. 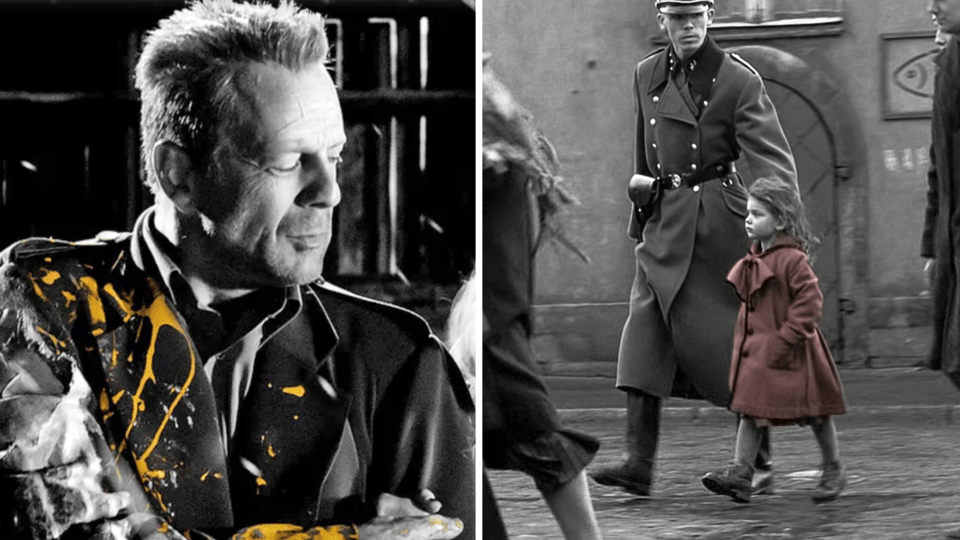 Other times, its use is all-encompassing. Notable examples of colour as a prominent theme are evident in such aesthetically stimulating movies as those by Pedro Almodóvar, Zhang Yimou, and Sofia Coppola. Watch how they use colour below.

Since Recipes for Love and Murder is all about the pink 💕👚💗 let’s put on our rose-tinted glasses (in cat’s eyes frames, of course!) and peer at pink in pop culture.

Pretty in Pink (1986)
This title is literally a reference to Andie’s (played by Molly Ringwald) prom dress, but there’s plenty more pink throughout the movie. On a symbolic level the colour is used to match its common associations – femininity, love, and innocence – to the film’s themes. The funny thing is when pink and blue started being used as sex identifiers for babies, pink was associated with boys because it’s deemed a stronger colour. Little wonder it eventually became associated with girls instead. 😉

Pink (1997)
While this song by Aerosmith doesn’t exactly subvert the association of pink with femininity and innocence, it certainly toys with it…as the colour itself started to in Western culture as it became associated with sexuality, especially in its more vivid forms such as fuchsia and magenta. Similarly in this song, when Steven Tyler starts singing about pink being his favourite colour, the symbolism still refers to the feminine but in a much more (ahem) sensual way.  🍒

Legally Blonde (2001)
This movie could just as easily have been titled Legally Pink. Reese Witherspoon displays all her feminine fabulousness through pink dresses, handbags, bikinis, sunglasses, faux fur, berets, bunny outfits, shoes, flowers, and bedspreads. It’s an explosion of pink in a film that celebrates femininity and friendship in many forms, while proving that pink is power as Elle whizzes her way straight into Harvard like it’s not hard at all.

Mean Girls (2004)
Pink is not always perfect. This movie turns pink’s associations with innocence and love on its head as it ties the colour to the girls of the title who are as fake as their nickname (The Plastics) and wear pink on Wednesdays. Mean queen Regina’s pink room even rivals Elle’s in Legally Blonde. As protagonist Lindsay Lohan slowly transitions from nice girl to mean girl, her practical plaids just as slowly but surely transition to plenty of pinks.

Harry Potter and the Order of the Phoenix (2007)
Another movie that uses pink as a warning that a mean girl’s approaching is the fifth instalment in the Harry Potter movie franchise. From her clothes to her office, almost everything belonging to Headmistress Dolores Umbridge is festooned in fluffy pink. As she doles out malice and misery with her dictatorial rules and regulations, the characters and audience soon learn to take no comfort from this colour.

The Grand Budapest Hotel (2014)
If Tannie Maria, Jessie, and Hattie decided to tour Zubrowka (not a real place, but it could be – much like the town of Eden) they’d be perfectly at home in The Grand Budapest Hotel. There’d even be a murder mystery to solve. This movie makes a perfect companion to Recipes for Love and Murder, especially because it also loves pastels and pinks. However, while there are similarities, there are contrasts too. It's set in the 1930s and not the present day; instead of the semi-arid climate of the Karoo, you have the bleak and blustery snowstorms of Eastern Europe, and while blue is the supporting colour in Recipes for Love and Murder, this movie’s is a bold purple.

Watch Recipes for Love and Murder every Sunday at 20:00 on M-Net channel 101.
Missed an episode? Catch up with DStv on your connected device.
Join the conversation on social media using #RecipesLoveMurder.