Five Things about The Bells – Game of Thrones

News
15 May 2019
Five things we loved about Game of Thrones Season 8 Episode 5.­­
Subscribe To Watch

Daenerys has gone mad like dear old dad and achieved what he wanted to before Jaime killed him: burning down King’s Landing. The signs were always there: from coolly watching her brother’s hot death and burning alive Mirri Maz Duur, Kraznys mo Naklozthe, the Tarlys, and now Varys to declaring “I will take what is mine with fire and blood”, her fiery vengeance on King’s Landing was awesome and awful and almost inevitable.

While Dany blazed a path of fire and blood, there was plenty else keeping us riveted to the screen. Here are five more things that had us gaping in the show’s second to last episode.

The Lannisters
Before we continue: can we get a round of applause for Lena Headey’s incredible portrayal of Cersei? This is a character whom we should loathe and detest, and mostly we do. But thanks in large part to Headey’s performance throughout eight seasons, even the vilest of women had moments that softened us. None more so than in The Bells, where she finally crumbles and breaks down as the Red Keep does the same around her. RIP Cersei. Maybe you’ll finally find the peace you need. 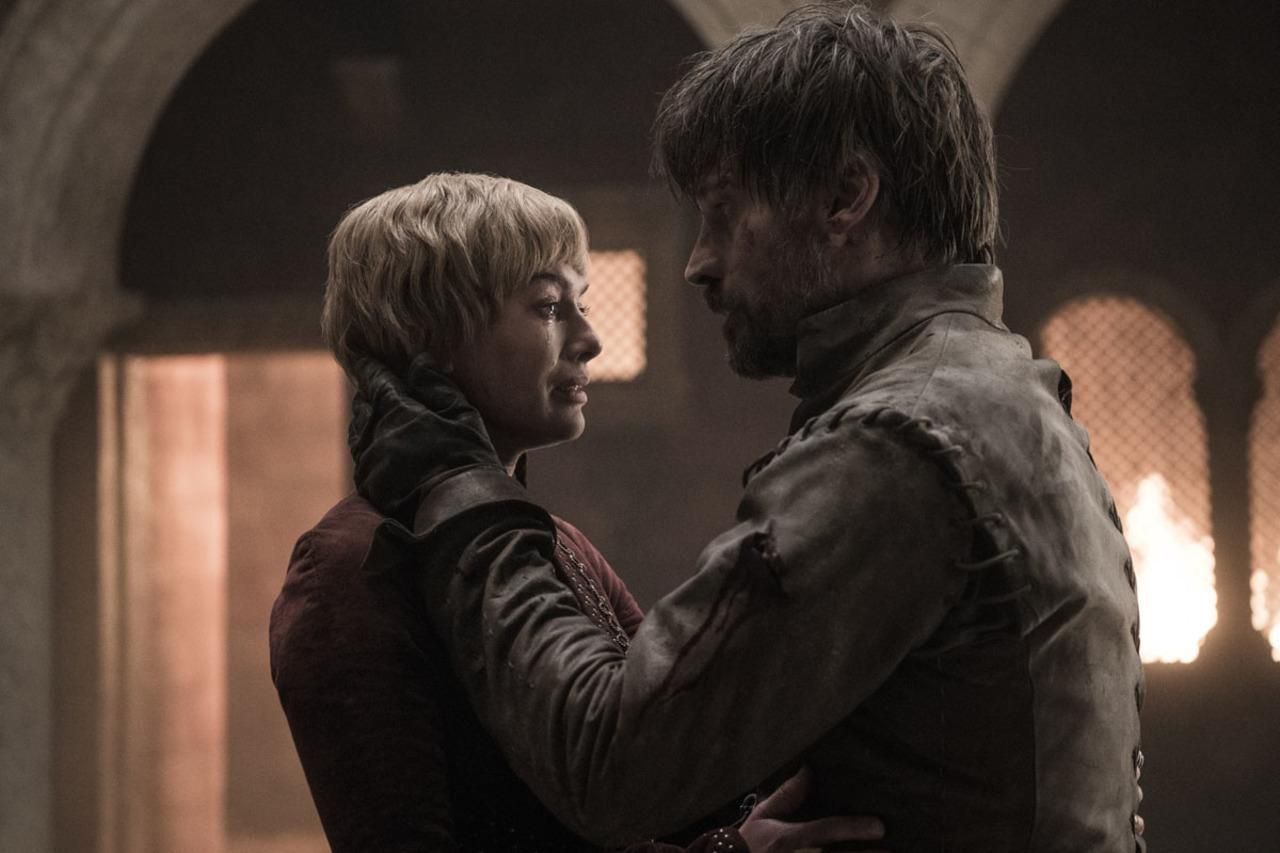 Going down with her, was her twin, Jaime. Although his final moments with Cersei are tender, what really got the tears rolling was his earlier goodbye to their younger brother, Tyrion who, at the end of it all and despite how Cersei treated him, did his best to provide them a chance at freedom and happiness.

Qyburn
This was a death we were far more pleased about. Qyburn was a weasel with major Frankenstein vibes, so it was incredibly satisfying to watch his creation, the zombified Mountain, swat him aside like the pesky fly he was. 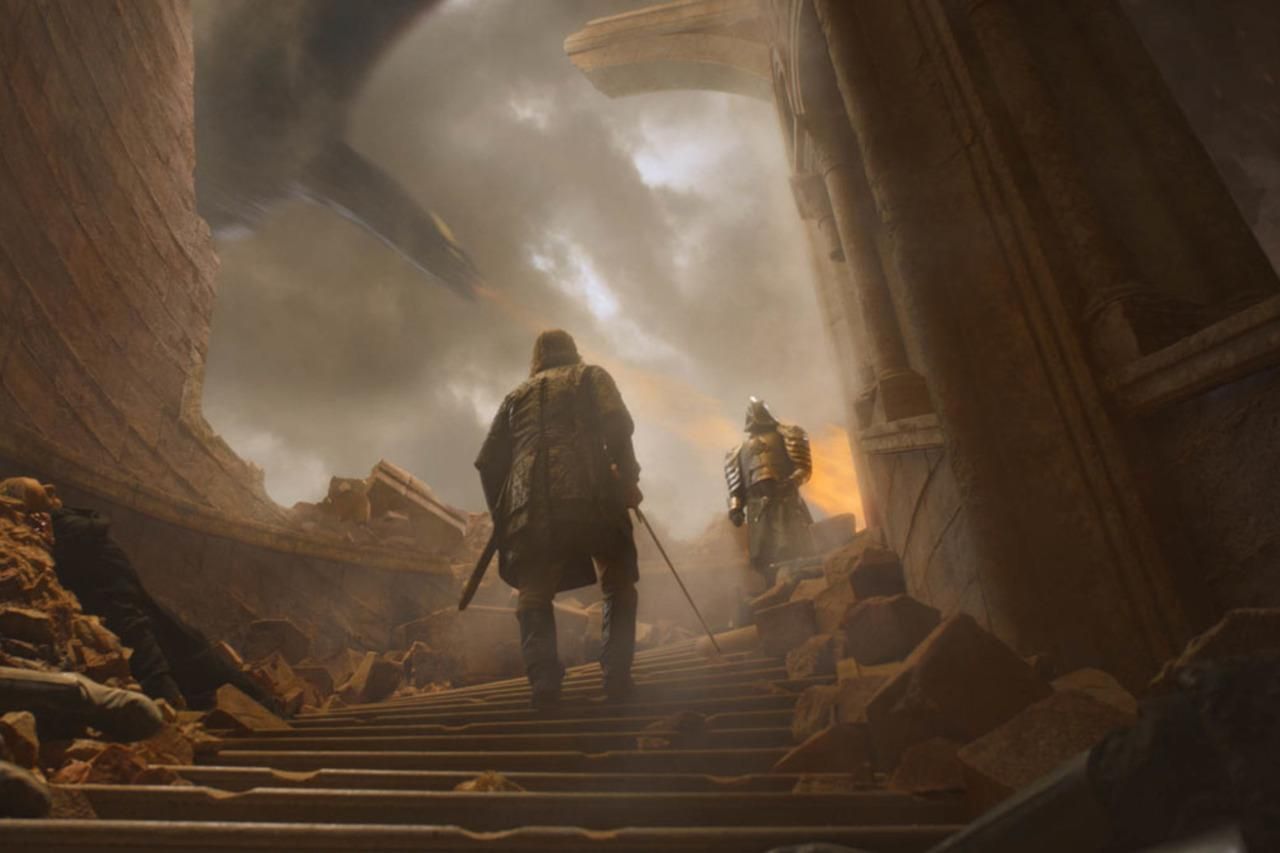 Qyburn, Drogon, The Hound, and The Mountain - Courtesy of HBO

Clegane Bowl
Speaking of The Mountain, fans got a moment they’ve been waiting for a long time: Clegane vs. Clegane, or Cleganebowl as it’s come to be known. Sandor “The Hound” Clegane had a massive showdown with big brother Gregor “The Mountain” Clegane in a sequence that was awesomely shot and breathtakingly intercut with the chaos on the streets of King’s Landing. The Hound lost none of his sarcastic wit, even in the midst of a brutal fight, and their end was both savage and poetic as they plunged to a fiery grave. 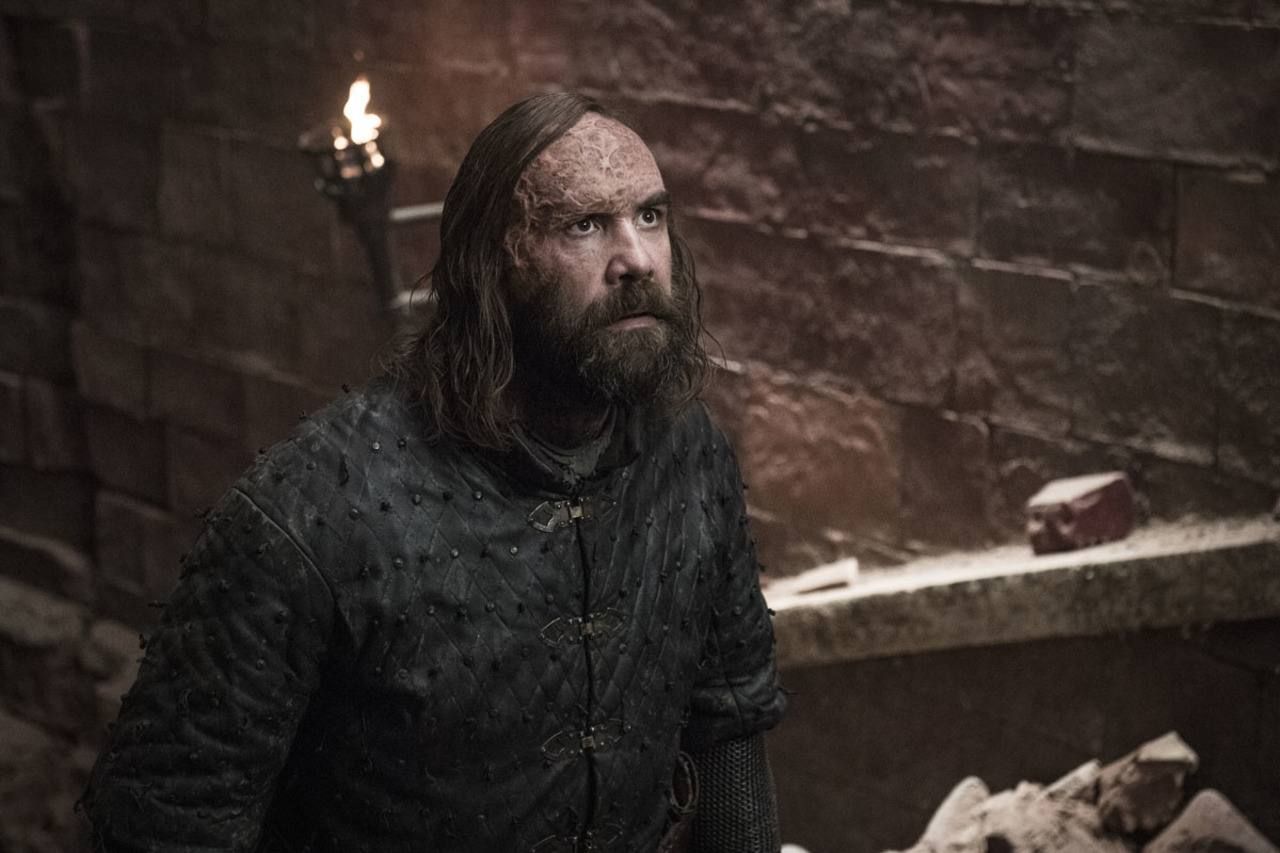 Arya
However, The Hound’s best moment was with former road buddy, Arya. Both were hellbent on revenge, but as the castle crashed around them, The Hound realised how doomed their missions were and sent her away. Despite her wrath, Arya never lets go of who she is: a Stark. It’s what made her keep Needle when she was training in Braavos, what helped her kill the Night King, and now helped her turn away from futile vengeance. Most touching, however, is her goodbye with The Hound, especially when she thanks him and finally calls him Sandor. 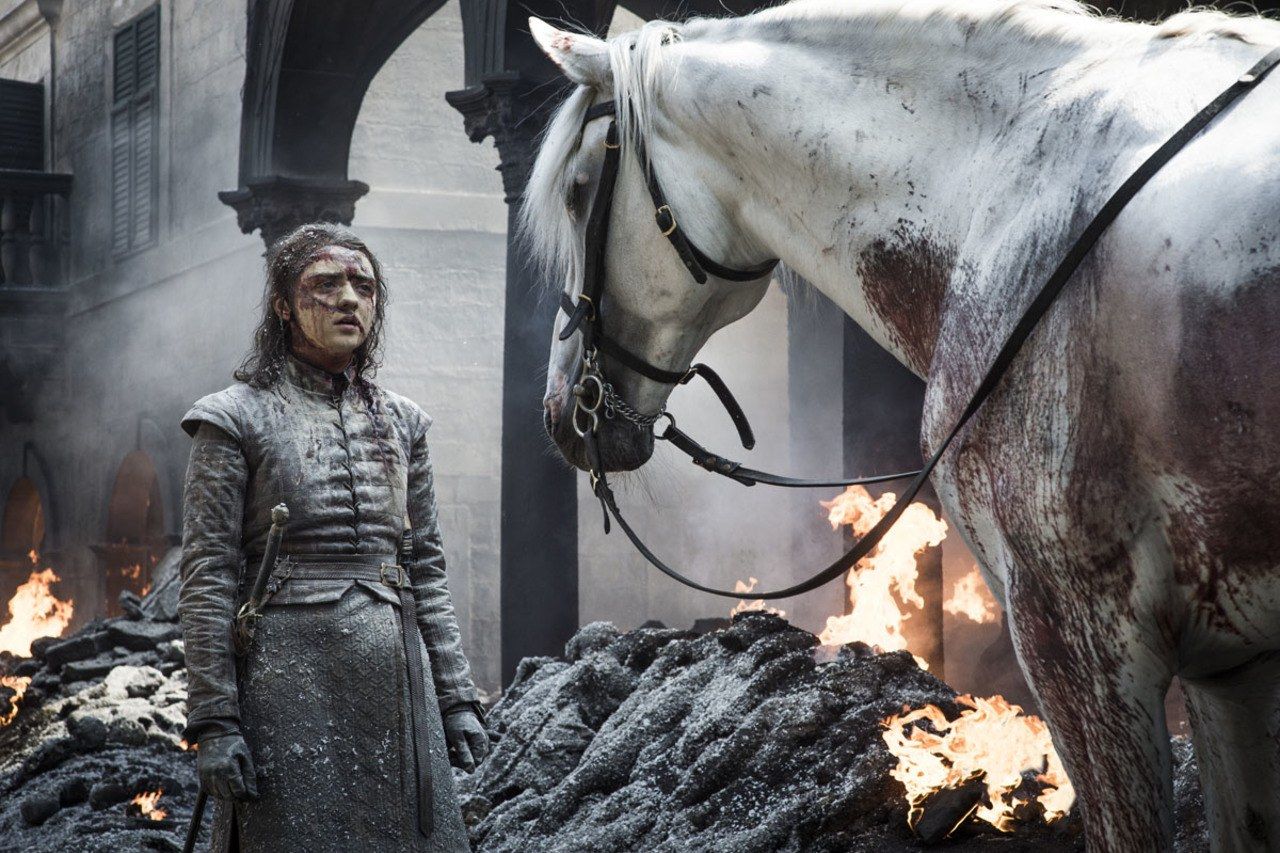 We then followed Arya through a visceral, nightmarish dash through the burning streets of King’s Landing. All the terror and turmoil of war is in front, behind, and around her, until finally it overwhelms her. But our heroine lived to see another day, and ended the episode on an ethereal note as a white horse (perhaps Harry Strickland’s?) survived the battle and carried her to next week.

The Cast and Crew
All of this – the fire, the blood, the cataclysmic destruction, and death – are woven together by director Miguel Sapochnik. This is the man who also swept us through the battles of Winterfell, Hardhome, and the Bastards, as well as the destruction of the Great Sept of Baelor. 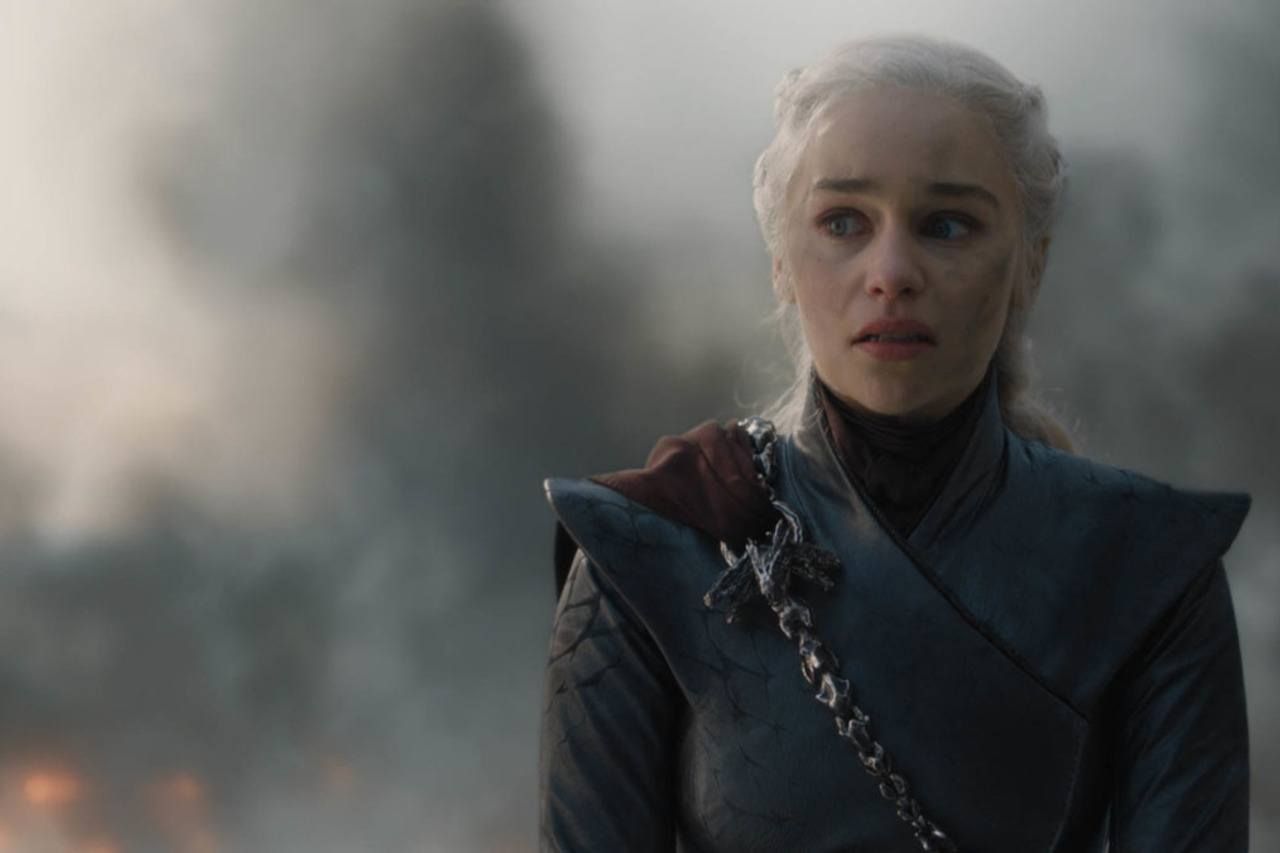 In The Bells, he takes us from the claustrophobia of the streets to the sweeping, airborne fury of Daenerys and Drogon, including that awesome shot of the dragon sweeping over Cleganebowl. We started with a round of applause, so let’s end with one. For Emilia Clarke and her wounded rage, for countless extras distressed and dying on the streets, the makeup team for the Vader-like horror of The Mountain unmasked, the effects team for everything about Drogon, as well as the emerald-hued explosions of wildfire, and last but not least: the stunt team for being more on fire than the show itself.

After all this, will Daenerys Stormborn of House Targaryen, First of Her Name, Queen of the Andals and the First Men, Protector of the Seven Kingdoms, Mother of Dragons, Breaker of Chains, the Unburnt, and Khaleesi of the Great Grass Sea still lay claim to all these titles and sit on the Iron Throne?

Find out in the final episode of Game of Thrones on Monday 20 May. Watch: