The Magic of Science

News
28 August 2017
Let me state for the record that I love science! I loved science before I knew that it was even called science. I have always been curious to understand the physics, biology and chemistry of things.

It was only in the last few years of primary school that I was advised that these particular subjects were difficult and to be avoided if I wanted a happy school experience. This negative belief came from everywhere; friends, educators and the adults I encountered. I chose the sciences anyway, and continued studying mathematics, chemistry, biology and physics to tertiary level. Before you’re impressed with my subject choices, please note that I loved the sciences, but that didn’t mean the sciences loved me back. I did not excel at these subjects. In fact, I was an average student, getting average grades, all the while surrounded by people who discouraged my subject choices. All this didn’t matter to me because I was still fascinated by what I was learning. All this gives context to the fact that when a science and technology story does come up for Carte Blanche, I’m more than happy to take it on. 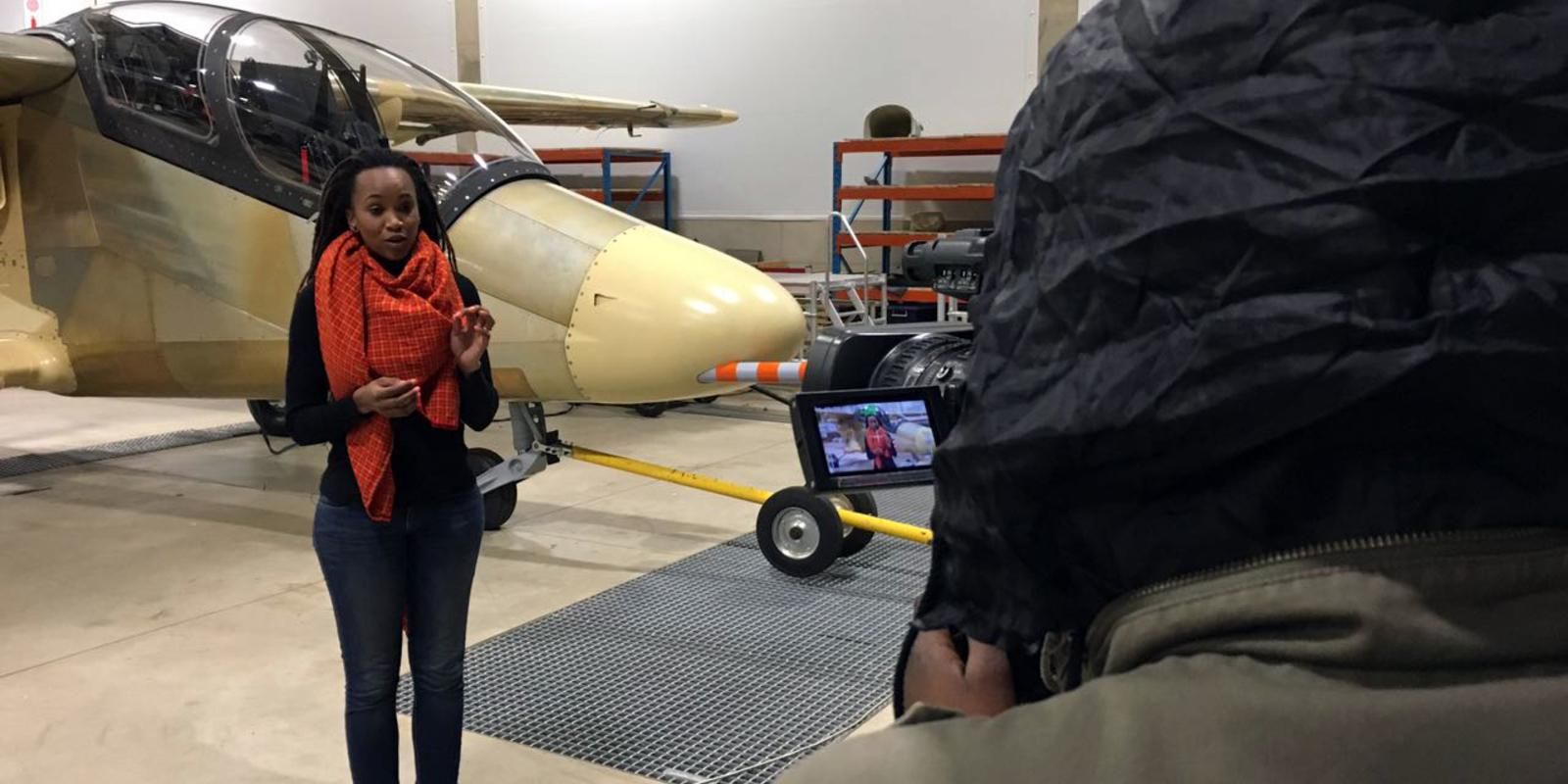 This particular story I was embarking on was about South Africa leading globally with regards to additive manufacturing, more commonly known as 3D printing. In fact, South Africans have developed and built one of the largest 3D printers in the world! This was astonishing news to me. Why had we not heard about this? Why is it not being celebrated? In a time when we need to hear more local good news stories, why was this not widely known? I was put on the case and Carte Blanche was going to investigate…

At 4am on a biting cold morning our team gathered at Wonderboom Airport, north of Pretoria, to witness the very first test flight of AHRLAC 2, the South African designed, developed and built Advanced High-performance Reconnaissance Light Aircraft (AHRLAC). The significance of this particular test flight was that there were several titanium parts of the aircraft that were 3D printed by the research project Aeroswift. This particular 3D printing process allows for large, complex aerospace components to be built at high speeds directly from titanium powder melted by high-powered lasers. We were there to witness these titanium printed parts in action. The only way to assess whether the 3D printed parts would actually work would be to risk the lives of two willing pilots (and the nerves of the entire team!) by taking AHRLAC 2 to the skies. The tension before take-off was palpable. Months of sleepless nights culminated in this moment. Would the vision, the theory and the planning lead to a successful venture? To everyone’s relief, the aircraft had an issue-free flight. Everything went according to plan, and AHRLAC 2 landed smoothly, proving that the titanium printed parts printed by Aeroswift passed the test with flying colours. Celebrations began as soon as the aircraft was safely back in the hanger.

I went on to interview a few key players that made it all possible, and their story was truly inspiring. But what struck me was the small number of people who are at the forefront of this pioneering additive manufacturing technology. The men who were breaking new ground were all passionate scientists. They have made South Africa a global leader with regards to additive manufacturing. South Africa is at the forefront when it comes to developing new technologies, and it is only through technological advancements that the world can move forward. The greatest discoveries are going to be made by scientists. It is through science and technology that age-old industries will be reimagined, that we will understand the world better and that solutions to common problems will be found. Scientists are the new great explorers of the 21st century.

This took me back to when I was a child and discovered my love for science. I sincerely hope that attitudes towards these subjects have changed since then.  In a developing country like ours that comes from a past where the majority of the population were not allowed or encouraged to take on these subjects, it is the duty of the Department of Science and Technology now to create more awareness of these incredible innovations and projects, so that children everywhere who have the aptitude can make the decision to choose science. I was inspired by this particular story, but also left wondering how we fare with producing more people who will keep South Africa growing.  We need more scientists. I am clearly biased towards science, but we cannot deny the feat of having a vision and watching it literally take flight!

Video
Just like magic
𝗧𝗵𝗶𝘀 𝘀𝘁𝗼𝗿𝘆 𝗼𝗿𝗶𝗴𝗶𝗻𝗮𝗹𝗹𝘆 𝗮𝗶𝗿𝗲𝗱 𝗼𝗻 𝟮𝟵 𝗠𝗮𝘆 𝟮𝟬𝟮𝟮. From selling vetkoek streetside to wowing audiences – Uncle Black Jack’s story is simply magical! But performing on Johannesburg’s glittering stages didn’t just happen with the flick of a wand; Uncle Black Jack had to walk a difficult road after immigrating from war-torn Democratic Republic of Congo, arriving in South Africa with little to his name. His childhood dream of becoming a respected magician kept him going and now, more than a decade later, he’s considered one of magic’s rising stars.
Video
The Professor and the plant
𝗧𝗵𝗶𝘀 𝘀𝘁𝗼𝗿𝘆 𝗼𝗿𝗶𝗴𝗶𝗻𝗮𝗹𝗹𝘆 𝗮𝗶𝗿𝗲𝗱 𝗼𝗻 𝟮𝟳 𝗠𝗮𝗿𝗰𝗵 𝟮𝟬𝟮𝟮. For centuries, humankind has been on an endless hunt for the Fountain of Youth. But perhaps it wasn’t a fountain we should have been looking for. A chance encounter with a remarkable plant with an ability to revitalise itself within a few hours of light rain brings hope. UCT Professor Jill Farrant is working to isolate the gene sequence of these plants to find out what secrets they could unlock. They’re called the Resurrection Pants, a very rare species seemingly able to come back from the dead. These plants are known to lose up to 95 percent of their water capacity, only to bloom back to life in as little as 12 hours after rain. So, could these plants be the real Fountain of Youth or perhaps reveal how we might survive the impacts of climate change?
News
COVID-19: Joining Forces
Protecting all frontline members, including our paramedics, nurses and doctors, is of utmost importance.
News
3D Printers Unite Against COVID-19
The arrival of the coronavirus has seen the 3D printing community want to step forward collectively with a common goal: what can we do to help?