The Kalahari: An Ecosystem in Crisis

News
18 November 2019
It’s a region spectacular in its extremes. On a summer afternoon, ground temperatures can soar to over 60 degrees. But in the middle of a winter night, they drop below zero. It seems unbelievable that an environment this hostile can support life – and yet it does, in droves.

Approaching Tswalu Reserve in the Kalahari via the aptly named Hotazel, you might be forgiven for wondering why this far-flung semi-desert is considered so special. On either side of the road, as far as you can see, stretch bone-dry, grey sand and scrubby trees. Mines spew dust and smoke into the air and towns feel like they have been decaying gently since the 1980s.

But everything changes when you see sunset turning the red dunes a soft pink. When you’ve sat quietly in the middle of this vast landscape, listening to the barking geckos set up their evening chorus, until finally you hear what you’ve been waiting for: the clumsy rustling approach of a pangolin through the scrub. When you’ve spent an evening lying in the sand (tentatively, to avoid the scorpions), and watching the Milky Way appear in splendour foreign to city eyes, that’s when you really begin to feel the magic of the Kalahari.

It’s a region spectacular in its extremes. On a summer afternoon, ground temperatures can soar to over 60 degrees. But in the middle of a winter night, they drop below zero. It seems unbelievable that an environment this hostile can support life – and yet it does, in droves. From the miniscule to the majestic, over the millennia species have carved out their niches. The elands-boontjie sends thick roots up to eight metres under the ground, their size belied by the dry twigs that are all that’s visible aboveground much of the year. The hotrod ant’s extra-long legs elevate its body from the scorching sand and allow it to avoid overheating by running very fast across the ground. Every beak or snout shape, every colour of feather and scale, is the product of countless generations of natural selection woven into a complex web we have barely begun to understand, let alone to parse out our impact on it.

We spent much of our history killing off or imprisoning wild animals before public opinion shifted and we started to observe them in their own habitats and to try to protect those habitats. In the last decades, phrases like global warming and climate change have finally made their way into our speech and we have started to demand recyclable packaging and rainforest-friendly chocolate. Greta Thunberg and her fellow child climate activists have garnered both admiration and vitriol for accusing world leaders of violating their rights by failing to act on the climate crisis. 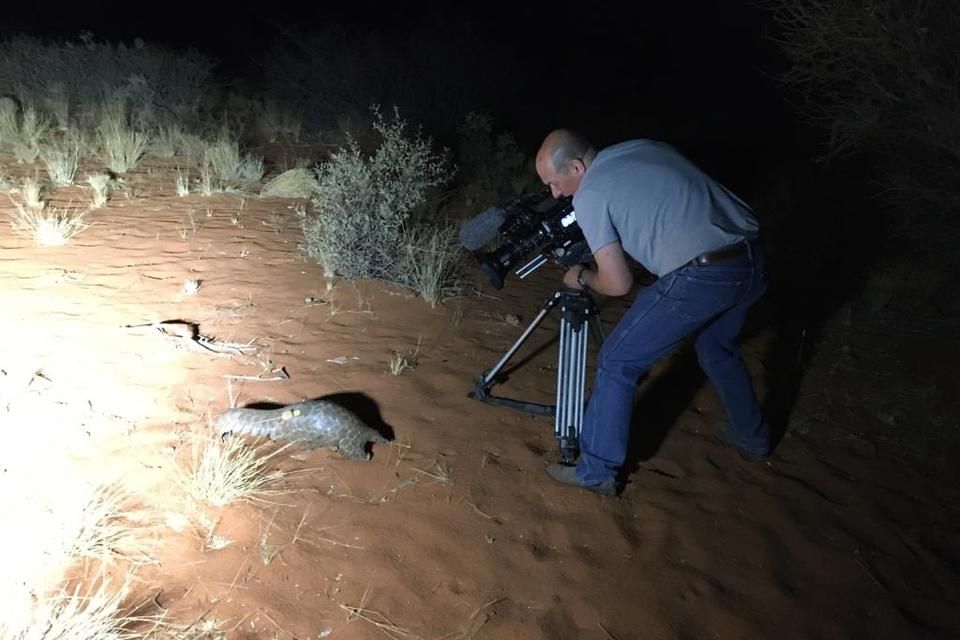 But our blossoming eco-awareness is disastrously overdue. According to a report released this year by the UN Intergovernmental Science-Policy Platform on Biodiversity and Ecosystem Services (IPBES), around one million animal and plant species are currently threatened with extinction – and we will lose many of them within the next decades. It is not too late to mitigate some of that damage, but only if immediate and drastic action is taken. Given that some of the world’s largest economies and biggest greenhouse gas emitters have failed to take the crisis seriously to date, it seems unlikely that adequately drastic measures will be taken now.

So, it’s fairly certain that we will soon lose some of those threatened species altogether. Others will disappear from regions that fall on the edge of their ranges – like pangolins and boomslang in the Kalahari. Prof. Andrea Fuller predicts that aardvark may no longer appear in the Kalahari as soon as ten years from now. We don’t know exactly what effect these disappearances will have on the rest of that intricate ecosystem, but we can make some predictions. Aardvarks, in whose burrows snakes, small mammals and even birds breed and take refuge, and sociable weavers, which build gigantic communal nests that provide an all-you-can-eat-buffet for snakes and a home for many other animals, are known as ecosystem engineers. The disappearance of these species from the Kalahari would have devastating consequences for the food webs around them.

Not all species will become extinct with climate change. Generalist feeders, like bat-eared foxes and cape cobras, which can turn to numerous sources of food, are predicted to fare better than specialists like Kalahari aardvark, which rely on a single species of termite for 80% of their diet. But according to Prof. Andrew McKechnie, only one-fifth of the Kalahari’s bird species will survive a four- or five-degree temperature increase. Researchers are trying to understand the limits of survival for key species in the Kalahari in order to better predict how they will cope with change. But what seems certain is that we will lose biodiversity, and the miraculous complexity of this ancient system will be diminished.

Biodiversity loss has far-reaching consequences for human beings as well. Besides the dangers that we face from increasingly frequent and increasingly severe extreme weather events like floods and droughts, climate change and biodiversity loss will increase poverty, food insecurity and disease. Poor communities are most at risk, and Africa is particularly vulnerable. Unfortunately, we are some of the smallest contributors to climate change, and we won’t gain any benefit from our own efforts to mitigate it unless larger contributors like the United States and China play their part.

It’s a bleak picture of the future and you could be excused for giving up or turning away from the crisis in despair. But we can’t leave it to the experts any more. This is everyone’s problem, and as Dylan Smith of Tswalu Foundation says, we need to take it personally. Don’t stop avoiding plastic packaging, don’t stop reducing your electricity consumption. And most importantly, say the conservationists, don’t stop demanding action from your government. It’s not too late to avert the worst of the future we’ve created for ourselves and the planet.

By Laura Byrne - Producer: Hotting Up in the Kalahari

Video
KZN floods: The aftermath
This past week, Macfarlane Moleli visited a flood-ravaged Reservoir Hills in KwaZulu-Natal. Cars, personal belongings, and remnants of people's homes served as a heartbreaking reminder that families used to live here.
Video
School’s out
𝗧𝗵𝗶𝘀 𝘀𝘁𝗼𝗿𝘆 𝗼𝗿𝗶𝗴𝗶𝗻𝗮𝗹𝗹𝘆 𝗮𝗶𝗿𝗲𝗱 𝗼𝗻 𝟮𝟳 𝗠𝗮𝗿𝗰𝗵 𝟮𝟬𝟮𝟮. As if South Africa’s staggering unemployment rate weren’t bad enough, a crisis in the education centre is making matter worse. Young people are dropping out of school at alarming rates, simply to join the ranks of the unemployed and unemployable. It’s a situation exacerbated by COVID-19, with closed schools leading to an alarming increase in the dropout rate. Government says parents are partly to blame, but at a time support was needed most, some pupils feel let down by the Basic Education Department and their teachers.
Video
Eastern Cape floods
𝗧𝗵𝗶𝘀 𝘀𝘁𝗼𝗿𝘆 𝗼𝗿𝗶𝗴𝗶𝗻𝗮𝗹𝗹𝘆 𝗮𝗶𝗿𝗲𝗱 𝗼𝗻 𝟭𝟲 𝗝𝗮𝗻𝘂𝗮𝗿𝘆 𝟮𝟬𝟮𝟮. It began as an ordinary overcast morning; minutes later large parts of East London and surrounding areas in the Eastern Cape were submerged. Severe thunderstorms battered the province, causing massive flooding and leaving hundreds of people bewildered and destitute. Now, after weeks of unusual torrential rains in some parts of the country, Carte Blanche explores the role of climate change in these extreme weather events.
Video
Deluge of dysfunction
𝗧𝗵𝗶𝘀 𝘀𝘁𝗼𝗿𝘆 𝗼𝗿𝗶𝗴𝗶𝗻𝗮𝗹𝗹𝘆 𝗮𝗶𝗿𝗲𝗱 𝗼𝗻 𝟭 𝗠𝗮𝘆 𝟮𝟬𝟮𝟮. It was a perfect storm of poorly maintained drainage systems and a predictable, periodic deluge intensified by climate change. But this was not the first time KwaZulu-Natal suffered severe storms and flooding. So, why were early warning systems and mitigation measures not put in place to protect the people of Durban against landslides and loss of life? Carte Blanche assesses the hundreds of millions of rands in damage to roads, bridges, schools and clinics – the bitter price of an unpredictable climate and inadequate maintenance.