News
02 June 2019
Chaos, a 16-year-old tawny lion, developed skin cancer on his nose due to lazing in the hot sun and the prognosis was that it would spread and lead to an early exit to Leo heaven.

Derek Watts (@DerekWatts) has been a journalist for nearly 30 years, presenting on South African television since 1985 as a sports anchor. Derek has been an anchor and presenter on Carte Blanche since the programme's inception in 1988.

It may be fitting that one of the most unusual animal stories I have presented on Carte Blanche focuses on the King of the Jungle.

Not roaming wild, but in the retirement section of the Lory Park Zoo nestled in Midrand between Johannesburg and Pretoria.

Chaos, a 16-year-old tawny lion, developed skin cancer on his nose due to lazing in the hot sun and the prognosis was that it would spread and lead to an early exit to Leo heaven.

Well, early if he was fighting the elements of nature. But lions behind bars tend to get a bonus tenure of six years or more.

For zoo owner Matty van Eck there was only one course of action when her prized lion took a turn for the worse and his loving wife Tequila was in danger of being widowed; get the best medical attention on the planet.

The vet, a specialist and lecturer at Onderstepoort, delivered the harsh news:  Chaos was a goner without four courses of radiation treatment.

Don't ask me why, but not a single hospital in the country has a radiation department specifically for treating lions.

There was no way that Matty was accepting this disregard for lion rights and eventually persuaded a private clinic in Pretoria to accept this hairy 260 kilogram patient with rather daunting gnashers below that tender snoot. And at a special price of R50 000. 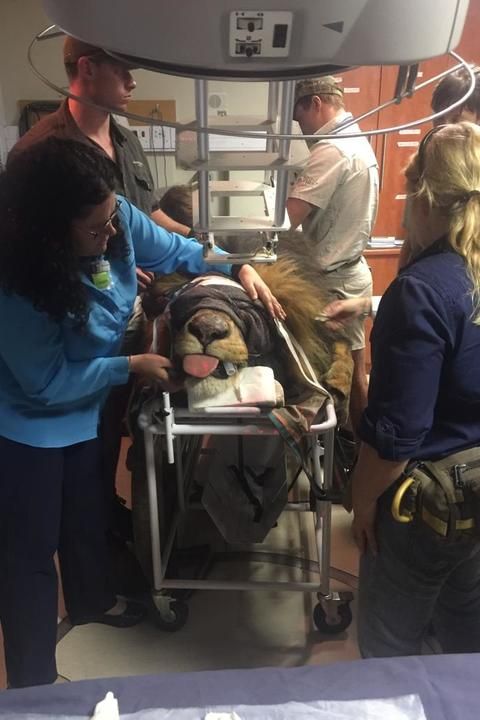 And that was our story. Covering the darting and transport of Chaos for the third round of his radiation treatment. And I must say that the picture I took of the sophisticated equipment being zoned in on those lesions was one I will keep in my photo album (or rather the cloud). It is that unique.

So, the good news is that Chaos is recovering nicely and should be all clear after his fourth treatment. Leaving a trail of oohs and aahs along with a few negative comments about the lack of radiation facilities for humans around the country and how the money could have been put to better use.

It's not easy to draw a "lion" in the sand with any of these arguments.

Personally, I was surprised that Matty was willing to shell out so much cash on a lion in the sunset of his years.

Then I thought of my wife who has been told she is over-bonded with our pets. And our wonderful but slightly neurotic dachshund Coco -  a superb football player whose skills with the round ball went viral on social media.

But then Coco's athletic past caught up with her and her back legs started faltering. At the age of eight she was diagnosed with a tumour on her spine.

The specialist vet looked up from the scans and very gently explained that the tumour was too close to the spinal nerves and surgery would be a risky business.

We left the practice with Coco swaddled in blankets and giving us very sad looks.

On the way home we received a call from the vet. She had spoken to a leading Johannesburg neurosurgeon and he was willing to assist her with the operation!

As a journalist I had to ask the question: how much will he charge?

"He's helped me a couple of times before. Maybe buy him a bottle of whisky..."

Those are fees I can handle. Coco was booked in for the big op and we collected her the following day, the tumour delicately and successfully removed.

Fast forward two years and my father-in-law is heading to hospital for major back surgery at the base of his spine.

Looking worried, he drops the name of the neurosurgeon. “Have you heard much about him,” he asks. Hopefully he doesn’t see me flinch.

It seemed so wrong to talk about how this specialist operated on Coco.

“Ja. I believe he’s brilliant. Heard only positive outcomes,” is my cowardly reply.

And he shares a relieved smile.

Video
Lions, tigers and bears
𝗧𝗵𝗶𝘀 𝘀𝘁𝗼𝗿𝘆 𝗼𝗿𝗶𝗴𝗶𝗻𝗮𝗹𝗹𝘆 𝗮𝗶𝗿𝗲𝗱 𝗼𝗻 𝟭 𝗠𝗮𝘆 𝟮𝟬𝟮𝟮. In the five weeks of Russia's invasion of Ukraine, more than four million refugees have fled to neighbouring countries – many clutching pets in their arms. But what about the numerous exotic animals in private ownership? Carte Blanche joins a wildlife activist on a risky but rewarding journey back into Ukraine.
Video
Fertility on ice
𝗧𝗵𝗶𝘀 𝘀𝘁𝗼𝗿𝘆 𝗼𝗿𝗶𝗴𝗶𝗻𝗮𝗹𝗹𝘆 𝗮𝗶𝗿𝗲𝗱 𝗼𝗻 𝟮𝟬 𝗠𝗮𝗿𝗰𝗵 𝟮𝟬𝟮𝟮. A story of ground-breaking innovation in medicine that’s meeting a deep human desire: to have children. And doing it for young people diagnosed with life-threatening cancers. Around the world, a collective of scientists is helping families preserve the future fertility of their children from the ravages of chemotherapy. Carte Blanche meets one-year-old Mackenzie “Mighty Mack” Friedman, diagnosed with aggressive leukaemia at just four months old. She recently underwent surgery to remove and preserve one of her tiny ovaries before undergoing a bone marrow transplant. The growing field of oncofertility is addressing two of the most time-sensitive aspects of this little girl’s life – getting urgent cancer treatment and preserving her chance to have a baby of her own one day.
Gallery
The Lion King
Video
Watch the Trailer - The Lion King (2019)
The Lion King is reimagined in the 21st century, featuring a new cast and stunning visual effects.