The Only Way Is Up

News
28 May 2018
If your natural inclination is towards skepticism consider that the hardware has already been developed, and that the Artificial Intelligence innovation required to fly the taxis and manage the airspace is likewise in place.

I was recently in Edinburgh, a city I had last visited six years ago.  Within hours of my arrival, I was walking through the suburb of Haymarket in search of food and historical stimulus.

Off a quiet street of terraced Edwardian houses undergoing various stages of renovation, I spied what I assumed to be a palace of some significance.  And, looping back towards the high street, I poked my head into the vestibule of St Mary’s cathedral.  It was quiet and Gothic and magnificent.

Edinburgh is a city of darkened sandstone, wrapped around an imposing hill with a Castle perched on top of it. On a sunny day the are few better places; when it rains, it's still hard to beat. 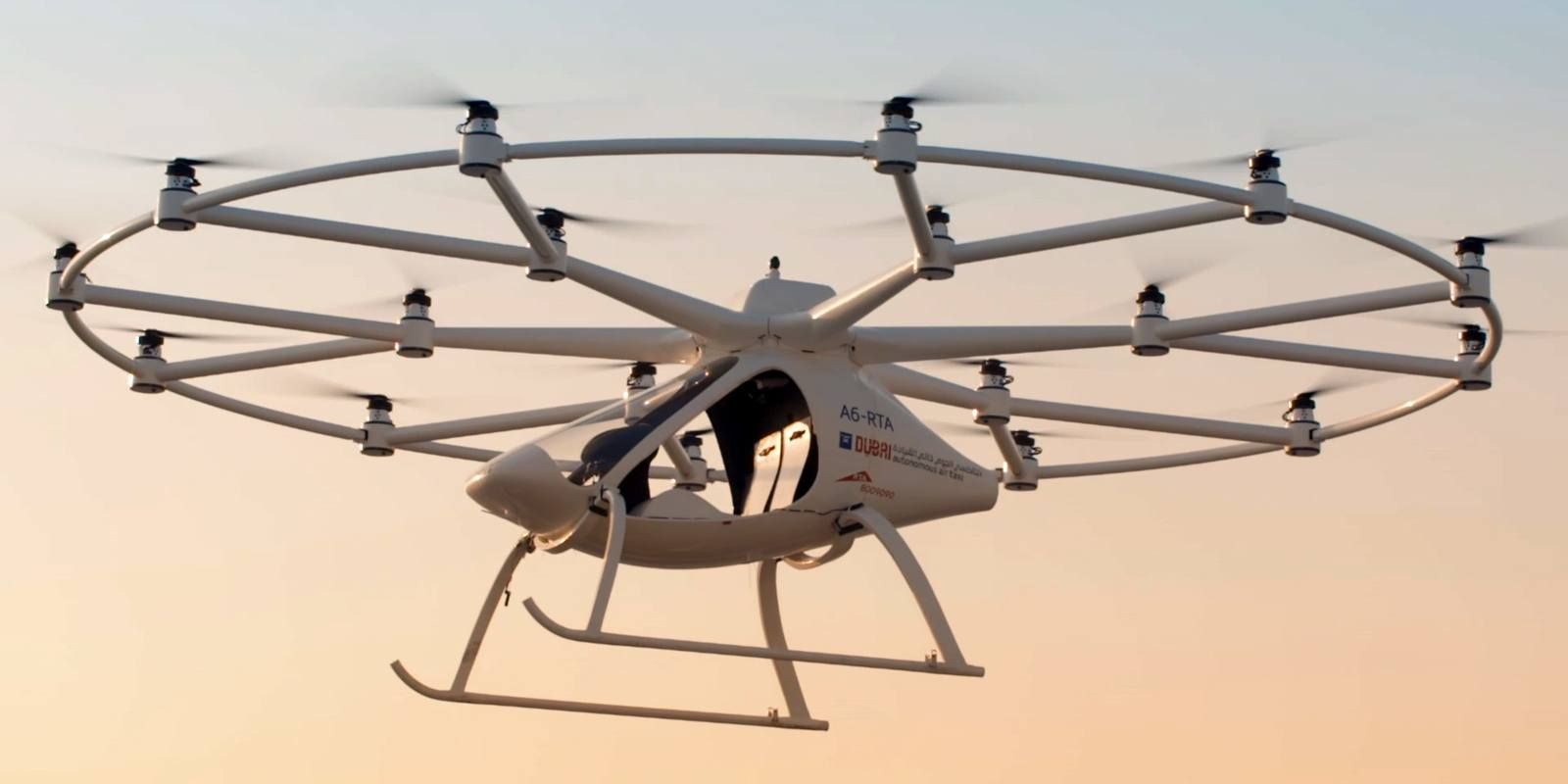 Culturally assuaged, I turned to more primitive concerns: where to find a decent haggis and 10-year-old Laphroaig single malt.  Actually, that’s not entirely true:  haggis is sustenance to those who confuse gastronomy with masochism, and Laphroaig is best enjoyed on special occasions like birthdays, anniversaries, Wednesdays, Thursdays and weekends.  I opted instead for salted beef at the Voyage of Buck – a gastro bar of mahogany and wall-papered walls.  And I thought about Jan Jurasek, the Uber driver who’d collected me from the airport earlier that day.

I sat in the front passenger seat anticipating a brief conversation on the 11km trip to my hotel.  My judgement proved lacking on two fronts: the first, that Jan, a jovial Czech, had clearly just emerged from a long vow of silence and was determined to make up for lost time.  The other, Edinburgh traffic.

Sadly, the Scottish capital has not escaped this modern affliction, its infrastructure simply unable to cope with the number of cars.  A situation not helped by its reliance on the cursed roundabout, a prime example of humanity’s propensity for solutions that make the problem worse.

So, to pass the time, I found myself regaled by stories of Jan’s youth, his days as a care-free engineering student and the complexities of his decision to seek out a simpler life in Scotland.  And the trauma of a brief career in the hospitality industry.  And the ups-and-downs of life with a Bulgarian partner.  And the shortcomings of the national health service.  And his not-unambitious-nor-brief dreams for the future.

I emerged from his Toyota Yaris a broken and somewhat confused man.  A journey of 11km had taken 47 minutes.  Or, put another way, roughly half a million words. At that speed, it would have taken us seven hours to finish the Comrades Marathon – well out of silver medal contention.

There are, according to most estimates, over a billion cars on the road globally.  By 2040 that figure will have leapt towards two billion.  If contemporary transport models continue to be relied upon, the impact on an already overburdened highway system is simply too horrendous to contemplate.  As it is, we’re spending a week of our lives each year cooped up in our cars in peak hour traffic.  And there isn’t a radio station, rock star or podcaster on this planet able to make that a bearable prospect.

On a rough head count, about a hundred established and start-up companies are currently working on autonomous passenger drone innovation that could well provide part of the solution.  These are so-called Electric Vertical Take-Off and Landing vehicles designed to fly within our cities.  They’ll operate independently of humans, at lower altitudes than most other air traffic and at lower speeds.  Their developers insist they’ll be safe, quiet and affordable.

And, if your natural inclination is towards scepticism consider that the hardware has already been developed, and that the Artificial Intelligence innovation required to fly the taxis and manage the airspace is likewise in place.  Unsurprisingly, it’s the regulators and bureaucrats – the people who brought us the Home Affairs’ approach to customer service, the Zeppelin and dreaded roundabout - who are holding up the works.  Once they fall in line, hailing a flying taxi might become as routine to all of us as catching an Uber.

One missing ingredient, of course, will be the Jan Juraseks of this world.  And that, I confess, makes me a little sad.

John Webb began his career in journalism as a wide-eyed cub reporter at news agency Network Radio News in 1997. He joined Talk Radio 702 in 1999 as a reporter and news reader and was assigned to major news stories. John then joined Carte Blanche in 2004, where he presented current affairs programmes from the field. He spent four years with European sports broadcaster Setanta Sports as a presenter and producer, returning to South Africa in 2013 to take up a six-month contract as host of "Talk at Nine" on Talk Radio 702 and 567 Cape Talk. In March 2014, John was the Pretoria field anchor for the highly successful Oscar Pistorius Trial.

Video
Electric avenue
𝗧𝗵𝗶𝘀 𝘀𝘁𝗼𝗿𝘆 𝗼𝗿𝗶𝗴𝗶𝗻𝗮𝗹𝗹𝘆 𝗮𝗶𝗿𝗲𝗱 𝗼𝗻 𝟭𝟬 𝗝𝘂𝗹𝘆 𝟮𝟬𝟮𝟮. With fossil fuel prices soaring, and climate change concerns peaking, now would seem like a good time to start the electric vehicle revolution. But with only a few thousand private electric vehicles on South African roads, will it be up to mass transport projects to bring the country in line with new technology and global mobility trends? Less than a quarter of the nation’s households own a car, so the real challenge is how to shift minibus taxis and passenger buses from diesel and petrol to electric. Is the aim of reducing the transport industry’s carbon footprint even feasible when faced with cash-strapped budgets? Carte Blanche meets the innovative engineers behind early projects that will shape the roll out of electric vehicles to move the masses despite the ongoing crisis of loadshedding.
Video
[FROM THE ARCHIVES] Zamas go legit
𝗧𝗵𝗶𝘀 𝘀𝘁𝗼𝗿𝘆 𝗼𝗿𝗶𝗴𝗶𝗻𝗮𝗹𝗹𝘆 𝗮𝗶𝗿𝗲𝗱 𝗼𝗻 𝟳 𝗡𝗼𝘃𝗲𝗺𝗯𝗲𝗿 𝟮𝟬𝟮𝟭. With the thousands of ownerless and abandoned mines dotting the South African landscape, countless men and women work as illegal zama zamas, risking life and limb to eke out a meagre existence from the ground. Between crumbling mine shafts, falling rock and rival gangs, there is little security or hope of a real future in working this way. But from the Pongola region of KwaZulu-Natal, on the border of the Ithala Game Reserve, the Klipwal Gold Mine holds out promise that things could work differently. Carte Blanche investigates a cooperative model that the mine’s owners and local zama zamas have adopted, bringing not only peace to the conflict-ridden property, but economic advancement for the miners.
Video
Paving the Way with mRNA
It’s been 38 years since HIV was first identified and, despite scientists’ dogged persistence, a cure and vaccine have remained elusive. Now, the eye-watering amounts of global funding for the rapid advancement of mRNA technology to combat COVID-19 in the last year has brought new hope in the fight against HIV. While we honour the scientists and activists who soldiered on against HIV, even when there was little light on the horizon, Carte Blanche investigates how mRNA development may help to level the playing field in the fight against other intractable diseases. #CarteBlanche
Video
We Unpack Gen-Z with Bronwyn Williams
Trend Analyst Bronwyn Williams navigates the world of the Gen-Zers. Unlike millennials they are less impressed by celebrity, opting for a more real and raw perspective. Highly engaged with critical global issues, this new generation is carving out a new space for themselves on snack-media like TikTok – more often than not utilising these platforms for activism.