News
31 May 2017
In my view, science presents an opportunity to explore the world around us. In physics, we mainly ask fundamental questions and attempt to answer through observation, theoretical calculations and/or scientific experiments.

The South African participation in experiments at the on-line radioactive ion beam facility (ISOLDE) at CERN began in September 1993 when Professor Krish Bharuth-Ram was invited to collaborate with the Emission Channeling group from the University of Konstanz, Germany. During the last twenty five years, the South African and African representation (academics and postgraduate students) at ISOLDE has grown significantly, contributing in SA becoming a full member of ISOLDE as of 2015. Our involvement in emission Mössbauer spectroscopy (eMS) experiments, which utilize short-lived radioactive isotopes, entails investigations of structural, electronic and magnetic properties on a suite of semiconductor materials for potential applications in spintronic and opto-electronic systems/devices.

Brief explanation: The team looks at introduction of dopants in semiconductor materials using radioactive isotopes and then determine the structural, electronic and magnetic properties at an atomic scale.

Over the last 10 years, research conducted at CERN by South African scientists has been made possible by the Department of Science and Technology (DST) and the National Research Foundation (NRF) through the SA-CERN Consortium. Such funding is allocated for the advancement of knowledge and expertise, training of students and human capacity development.

After attaining a BSc (Honours) degree in Applied Physics at the National University of Science and Technology (NUST), Bulawayo, Zimbabwe, I later registered for a Masters in Science (MSc) Degree at the University of the Witwatersrand (Wits) in July 2008. Subsequently, my journey to CERN commenced immediately as some of the experiments undertaken at ISOLDE formed my MSc project which was later followed by PhD studies with experimental work undertaken at ISOLDE, Wits and iThemba LABS-South in collaboration with the University of Jena, Germany. My supervisors, Professors Deena Naidoo and Krish Bharuth-Ram, introduced me to the exciting field of Nuclear Solid State Physics and the ISOLDE facility. CERN is a stimulating working environment where I have gained enormously through interacting with world class international scientists and research students. 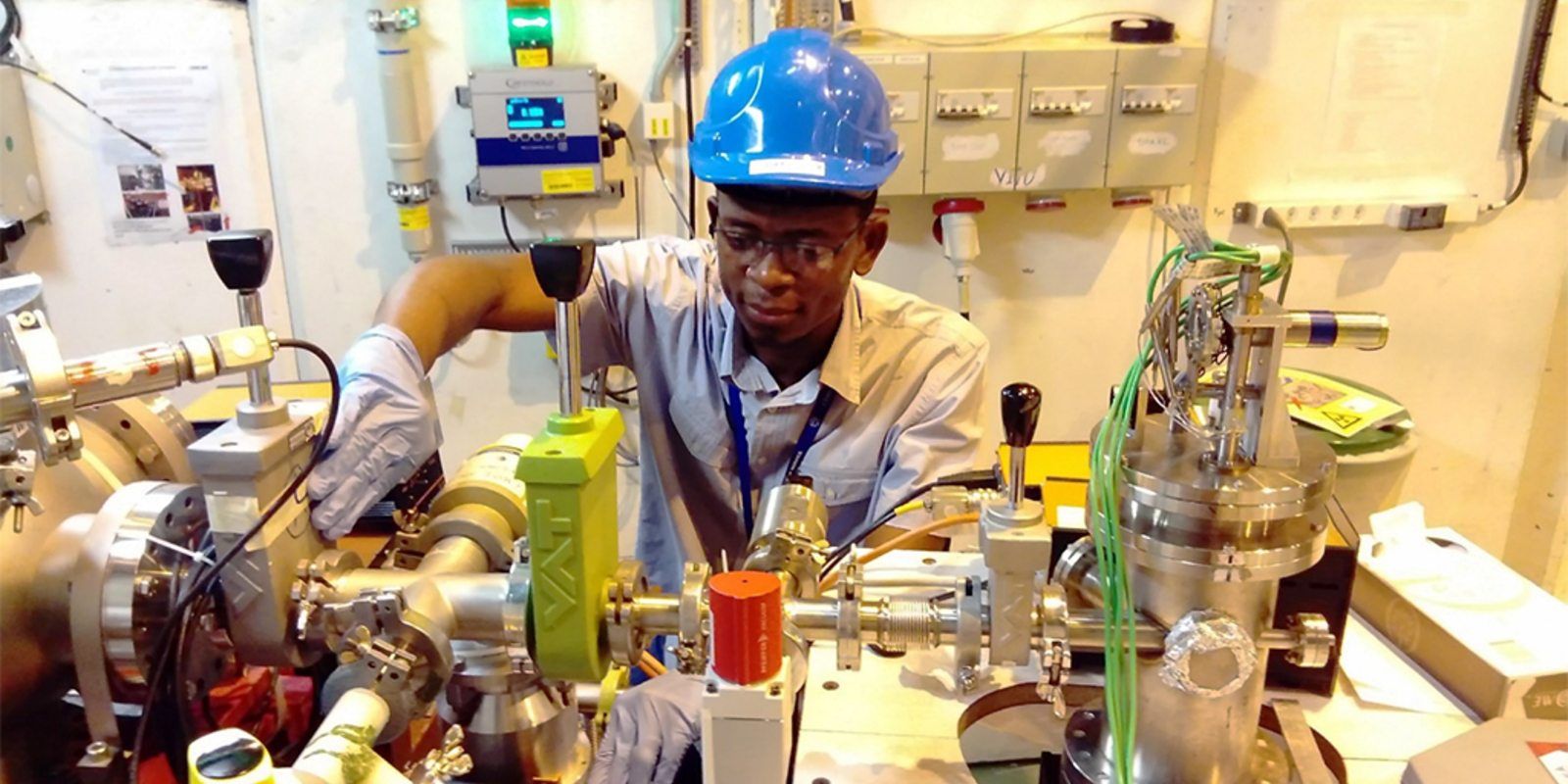 Currently, I am employed as a lecturer in the Wits School of Physics and am an active member of the eMS collaboration at ISOLDE – contributing to experiments, data analysis, scientific publications, conference presentations and ideas through co-authoring proposals for future projects. Recently, as a spokesperson, I defended a proposal which was approved as a new 3-year project. As a result, I am presently at ISOLDE on a short-term research visit in preparation for this project and other active proposals.

In my view, science presents an opportunity to explore the world around us. In physics, we mainly ask fundamental questions and attempt to answer through observation, theoretical calculations and/or scientific experiments. The drive in solid matter physics is to tailor-make materials with novel and fascinating properties for use in every day devices. In our CERN Collaboration, among new and ongoing projects, we are exploring ternary nitride semiconductors which can be used in various electronic devices, lights and LCD screens in televisions, mobile phones and other devices. The road from discovery to application and commercialisation is an extensive process. Nonetheless, the realisation of functional materials in practical applications is underpinned by very careful, patient research that has to withstand scrutiny by international peers.

Research in physics at the atomic level offers the platform to search for understanding based on fundamental physical principles with a quest to unravel new discoveries that may be utilised to realise efficient devices for the advancement of society.

As a developing scientist, I will continuously strive to conceptualise new ideas and certainly hope to inspire the next generation of scientists through teaching and mentoring of research students.

Video
Travel disillusion
𝗧𝗵𝗶𝘀 𝘀𝘁𝗼𝗿𝘆 𝗼𝗿𝗶𝗴𝗶𝗻𝗮𝗹𝗹𝘆 𝗮𝗶𝗿𝗲𝗱 𝗼𝗻 𝟭𝟬 𝗝𝘂𝗹𝘆 𝟮𝟬𝟮𝟮. They were promised the world – or at least the opportunity to travel it. But dozens of would-be jetsetters claim they’ve been taken for a financial ride by an apparently unscrupulous travel company. Hooked by the allure of five-star holidays in exotic destinations, and the opportunity to travel the globe on a budget, with no hidden costs, numerous Carte Blanche viewers say big promises left them financially stranded. More than 60 criminal cases have been lodged against the company since 2017, with disgruntled clients claiming they have very little hope of ever getting their money back.
Video
Enyobeni: Tavern of terror
𝗧𝗵𝗶𝘀 𝘀𝘁𝗼𝗿𝘆 𝗼𝗿𝗶𝗴𝗶𝗻𝗮𝗹𝗹𝘆 𝗮𝗶𝗿𝗲𝗱 𝗼𝗻 𝟭𝟬 𝗝𝘂𝗹𝘆 𝟮𝟬𝟮𝟮. As devastated families in the Eastern Cape buried their loved ones this week, the country is still in shock over the 21 young lives lost at a local tavern in East London. While the cause of their deaths remains unconfirmed, one question lingers: why were children as young as 13 out drinking at a tavern? In South Africa, alcohol consumption figures among adults are rated among the highest in the world, but is underage drinking becoming a norm, too? Within days of the tragedy, Carte Blanche took to the streets of East London and surrounds to find underage drinking carrying on unabated in the area. We confront the Provincial Liquor Board on where accountability lies.
News
[Guest Blog] MeerKAT’s MIGHTEE Finds
It was incredibly exciting to find these two mega-giants because it means there are probably many more out there in the cosmos just waiting for us to find. Our discovery demonstrates the amazing abilities of MeerKAT and we think it will be able to reveal even more of the Universe’s secrets!
News
[Guest Blog] Making Space for Elephants
For many of us living in the west, far from the African bush, the idea of living next to elephants seems exotic, idyllic and even romantic.