News
17 May 2020
I have seen many cases of cheetahs with very bad injuries and obesity due to the fact that these animals are not kept in appropriate enclosures and are not fed optimally to sustain them.

There are many innate behaviour patterns that big cats do not lose in human care. Human care actually is the correct term to use when we talk about keeping wild animals in captivity. If we humans consider ourselves as good and righteous we have the responsibility towards any other living creature which we decide to put in a cage or enclosure, to give that animal the best and most humane care possible which includes all insights into their natural needs according to current knowledge.

Cheetahs raised under the control of humans or taken into captivity by humans should be afforded the provision of the basic Five Freedoms being adopted increasingly throughout the animal welfare world:

The needs and requirements for cheetahs in captivity or any captive wild carnivore are extremely broad. A lot of money, time and effort should go into their care. Their camps or enclosures should be large enough to sustain the correct amount of enrichment [stimulation maybe?] and protection for them.

Captivity conditions need to simulate the wild as much as possible relating to diet and supplements and biological control of diseases. The animals should be appropriately and timeously vaccinated and dewormed and treated for external parasites. A large percentage of these captive carnivores are covered in ticks and fleas because people cannot handle them. I have witnessed many cases where animals have died due to blood loss from excessive flea and tick burdens.

Many of the local long acting antiparasitic substances against fleas used in dogs are toxic to cheetahs or cause eventual long-term organ failure or health complications. Cheetahs are very sensitive to most drugs and chemicals, so they can be poisoned and get ill very easily if handled, treated or kept by people who have no experience or knowledge of these animals and inadvertently administer these drugs to them.

I have seen many cases of cheetahs with very bad injuries and obesity due to the fact that these animals are not kept in appropriate enclosures and are not fed optimally to sustain them.

Sedation and anaesthetics can compromise cheetahs, causing renal ischaemia (kidney damage). People who have no experience that use chemical agents to sedate these animals cause them more harm than good. They require very specific types of drugs with strict doses calculated to safely sedate them. Most people do not understand the long-term implications of this. 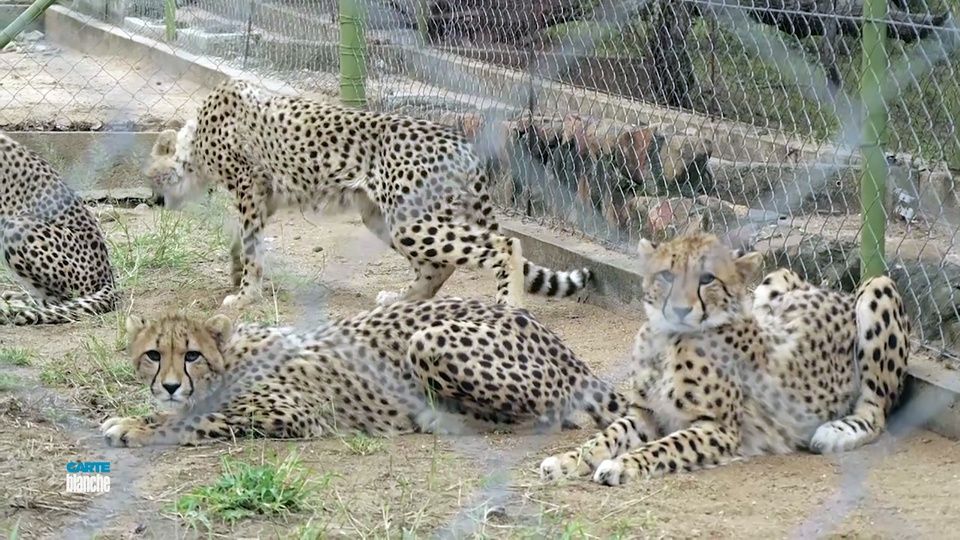 Nutrition and feeding are critical aspects of keeping carnivores in captivity. One cannot just feed whole carcasses of chickens, for example. There are insufficient nutrients and also a huge risk for Salmonella and E coli bacteria in these carcasses which would contaminate the environment and increase the risk of food poisoning. The reason for the bacteria growth in this food source is because the appropriate cold chain from when the animals die to being fed to the cheetahs is not maintained. Meat should be refrigerated to prevent it from going off and making the captive animals ill.

The source of the meat and chicken carcasses are almost always very questionable in most cases due to the fact that individuals will source the cheapest meat and carcasses, often making use of either animals that have died from one cause or the other (diseased or insufficient for human consumption).

These carcasses are usually filled with antibiotics, hormones and heavy metals that cause the cheetah illness, organ failure and even lead to death.

No supplements or inappropriately balanced supplements should be added to meat these animals are fed. Meat alone can not sustain cheetahs or any captive carnivores, one has to supplement their meat to maintain optimal health.

Insufficiently balanced nutrient supplements would cause these animals to get nutrition-related diseases for example metabolic bone diseases, hypovitaminosis A, copper deficiency, thiamine deficiency, Vitamin D deficiency, calcium, phosphate imbalances, rickets, pathological bone fractures and so forth. All these nutrition-related shortages and imbalances lead to severe pain and discomfort and neurological conditions where the cheetahs can become paralysed and drag themselves around the enclosures. These are the most common diseases I see as a wildlife veterinarian and I see cheetah cubs with up to 13 bone fractures due to deficiencies in their diet and poor animal husbandry.

An example of what people do when keeping big cats in captivity is declawing them to make them more user-friendly as pets and for breeding, in order to make money from them. Declawing is extremely painful and carries with it the associated risk of infection, arthritis, constant pain and permanent lameness as the big cat ages. The animals are deprived of their most natural behaviour to use their claws to climb, exercise, and mark territory. Declawing has all kinds of negative impacts on the big cats. If living in a group with others it makes them more vulnerable as they cannot defend themselves during fights. This influences their status in the group’s hierarchy and can cause them permanent stress or worse. Big cats show very little altruistic behaviour which means when a group member is becoming weak in any way it does not receive help from the others but the opposite – it will be cast out or attacked. Pain can also cause aggression which has an impact on their interaction with other group members as well as the level of husbandry and management. In this case it could also cause them to become more aggressive and attack humans. Declawing is an act which serves only the humans and has nothing to do with humane behaviour or human care. It is possible that any person who has no special knowledge or profession in the field of animal behaviour or management is allowed to keep big cats in private ownership however they see fit.

The primary purpose of any big cat sanctuary or facility should be to create and provide a sustainable and long-term solution for big cats from all corners of the world. It is important to provide a species-appropriate habitat to live free from fear and torment.

Changes in legislation all over the world and ethics in terms of wild animals are important goals one strives for. It is important to strive for standards in animal husbandry by providing different predators the closest species-appropriate circumstances possible if they are to be kept in captivity for whatever reason. Highest standards in husbandry, specialised management and medical care go hand in hand with dedicated professionalism and education.

News
[GUEST BLOG] The Ins and Outs of Midwifery
Many expectant couples have questions about the birth options out there and which choice would be the best for them. This will depend on your pregnancy, how labour unfolds, the health of mom and baby, where you live, and what birth facilities are available in your area.
Video
Carte Blanche debate: comprehensive sexuality education
We get the views of an expert panel on government’s much-talked-about Comprehensive Sexuality Education. Guest presenter Busisiwe Gumede-Chizhanje mediates in this second instalment of Carte Blanche Debates.
News
Meerkats: Cute but Wild
Having a meerkat as a pet has become the new ‘in thing’, but it is the worst thing you could possibly do to these animals. They are very social animals and cannot survive on their own...
Video
Lions, tigers and bears
𝗧𝗵𝗶𝘀 𝘀𝘁𝗼𝗿𝘆 𝗼𝗿𝗶𝗴𝗶𝗻𝗮𝗹𝗹𝘆 𝗮𝗶𝗿𝗲𝗱 𝗼𝗻 𝟭 𝗠𝗮𝘆 𝟮𝟬𝟮𝟮. In the five weeks of Russia's invasion of Ukraine, more than four million refugees have fled to neighbouring countries – many clutching pets in their arms. But what about the numerous exotic animals in private ownership? Carte Blanche joins a wildlife activist on a risky but rewarding journey back into Ukraine.