News
17 December 2017
In a time when good news is hard to come by, I’m delighted to hear of any heartwarming South African stories that appear on the timeline.

In a time when good news is hard to come by, I’m delighted to hear of any heartwarming South African stories that appear on the timeline. My mission, if I chose to accept it, was to travel to Dewetsdorp in the Free State to chat to a world champion. You would think that in a sports mad country like ours, we would know every sporting world champ by name; Wayde van Niekerk, Kagiso Rabada, Chad le Clos, Caster Semenya, etc. Unfortunately, there is one champ that hardly anyone has heard of, despite his impressive achievements. Hailing from the small town of Sterkspruit in the Eastern Cape, he’s been competing for over ten years already, is the unbeaten South African champion, became World Champion for the first time in 2014, and recently successfully defended his World Championship title defeating over 30 countries and triumphing over 400 competitors to remain at number one! He’s known as the sharpest and fastest blade in the world and his name is Mayenzeke Shweni, the World Champion at blade sheep shearing! 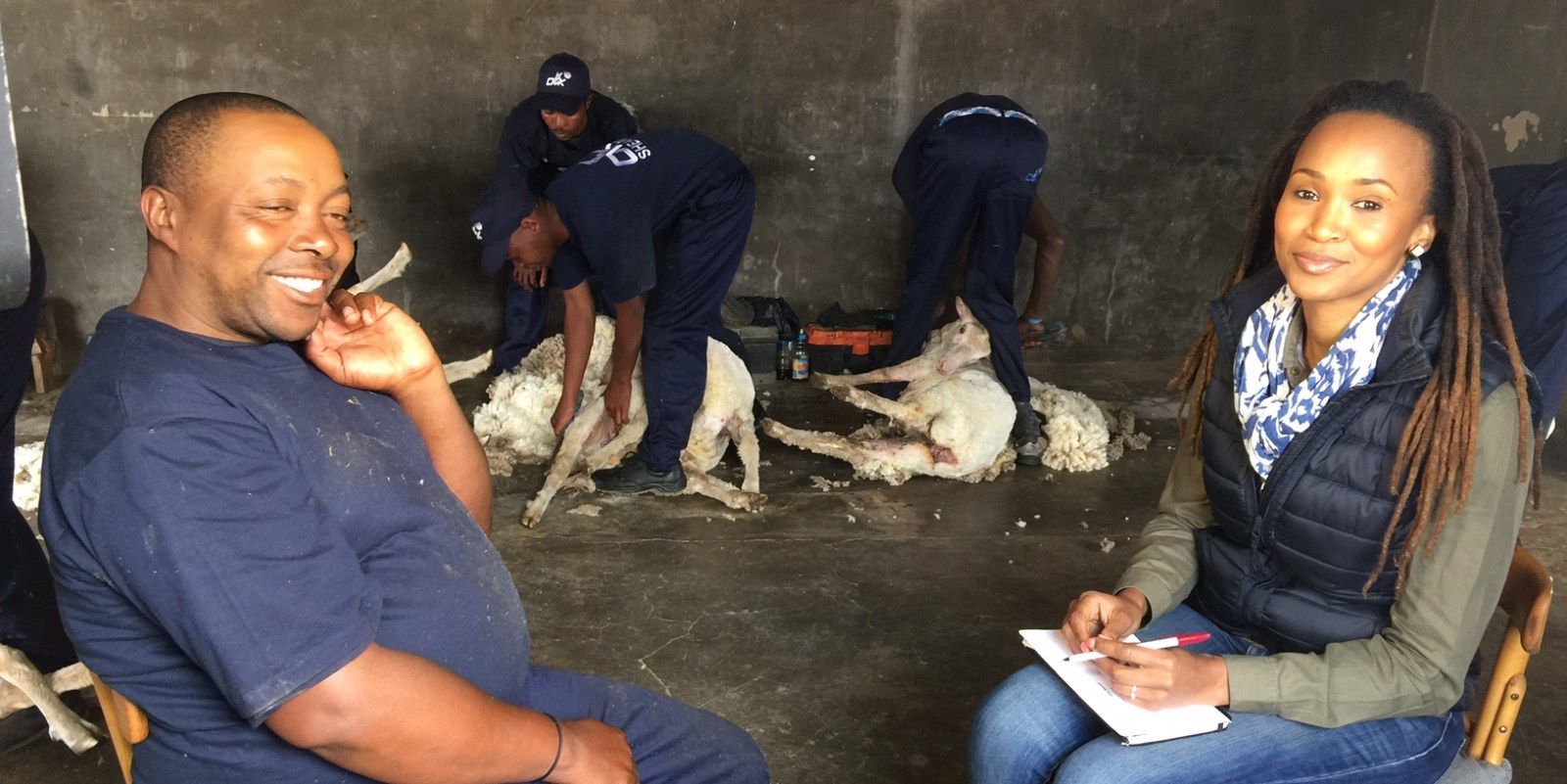 To be honest, I didn’t know sheep shearing was even recognised as a serious competitive sport, and always thought it was what farmhands did for fun in their spare time, or at agricultural fairs. I was intrigued and wanted to meet the man we should all know by name, and was directed to the shed on the farm we were visiting, on a very cold Free State autumn morning. The shed was surprisingly quiet, considering there were several men already working hard, doubled over healthy looking sheep. All I could hear was the hushed conversations of the shearers, the snip-snip of the blades, and an occasional bleating sheep. The champ I was looking for was in the corner, silently shearing the now docile sheep he had under control. He seemed shy and quite overwhelmed that we had come all the way from Johannesburg just to speak to him. This was not aided by the fact that his colleagues kept poking fun at him, teasing that he’d appear on TV and be famous.

We sat down for a conversation and I found out that Mr. Shweni comes from a very poor background. His parents didn’t earn much money, and there were five children to look after. His father passed away in 1982, leaving those left behind in abject poverty. Mayenzeke had to drop out of school to go find work to help his family. Recounting the story still brings tears to his eyes. The pain is still fresh, and the memories still difficult to talk about. After a few odd jobs here and there, he found a job on a farm shearing sheep. He was shown what to do and soon that became his source of income. In South Africa, sheep shearers are migrant labourers. They travel to where the work is needed, sometimes staying in a province for up to three months before moving on to the next region. They get paid per sheep they shear, and if they shear 100 in a shift, that figure would come up to approximately a meager R150 per day. They’re away from home for up to 10 months of the year. There are about 3000 sheep shearers in South Africa that shear approximately 15 million sheep per year. It’s a tough life, every cent is hard earned. 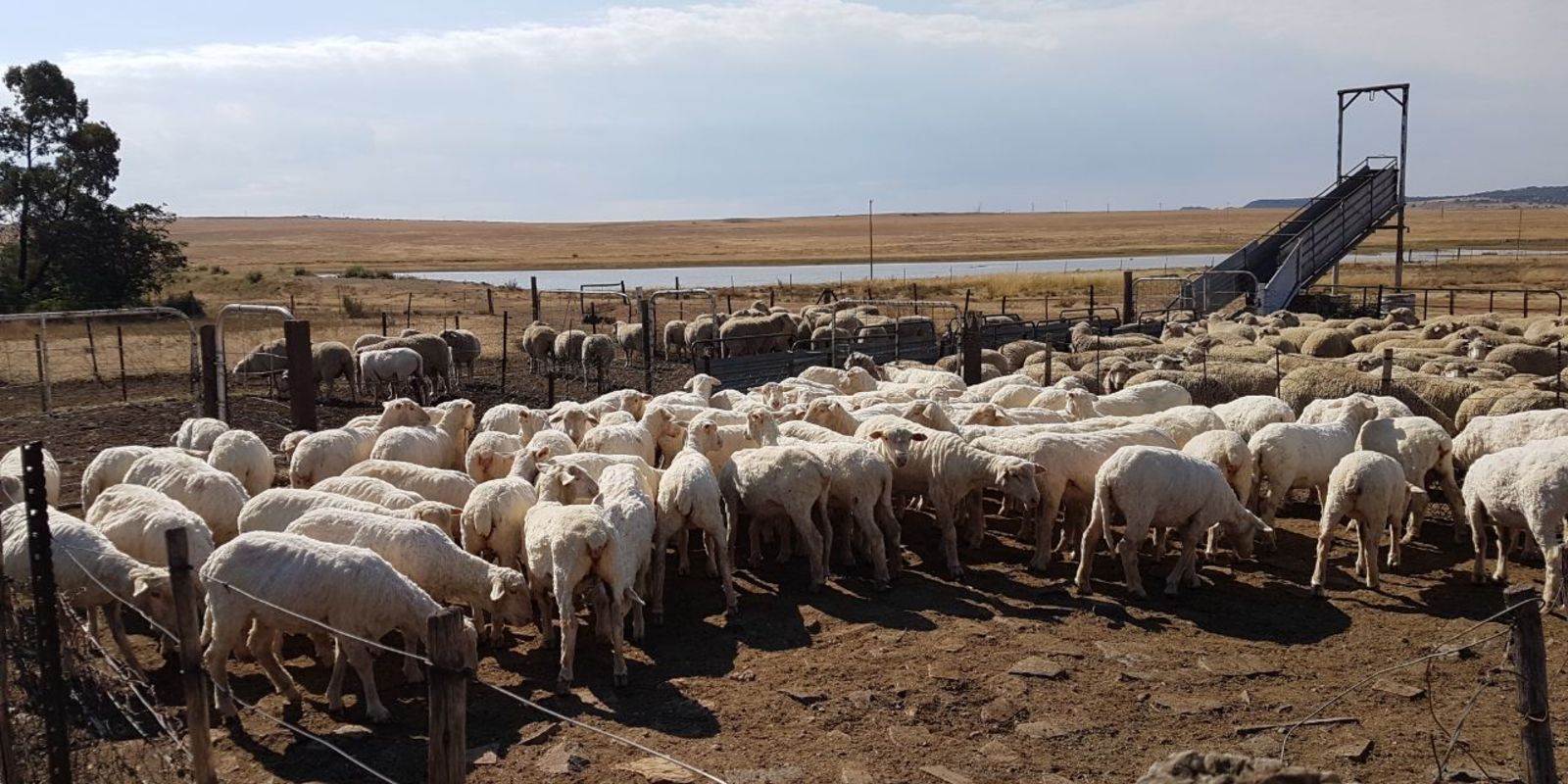 His employer at the time recognised that Mayenzeke was particularly good at sheep shearing and entered him into competitions. He did so well locally that it led to him travelling to Wales to compete with the best in the world. Even though he didn’t win there, the trip was the turning point that made Mayenzeke realise that sheep shearing could be his calling. He had never thought that it would lead him to travel overseas, and to be widely respected for his work. From then on he knew that this was how he could leave a lasting legacy for his family and his children. He was going to throw everything he had into his work, and not just accept it as another job, it was now so much bigger than that. He trained and competed harder than ever before, till his name was well known on the international shearing stage, winning his first world title in 2014. He still smiles broadly when sharing that story, and reliving that moment.

Mayenzeke is 44 years old and doesn’t have a physique we would typically associate with a super athlete. In fact, he has a bit of a boep. But don’t let that fool you; he has the stamina of several professional rugby players put together! Spending each day bent over, shearing up to 120 sheep that each weigh approximately 60kgs is no joke! He says that in the summer time, he has to drink up to 7 litres of water just to stay hydrated. Bear in mind that it is an unpredictable animal shearers have to skillfully control, and any kick from the sheep could seriously injure both the shearer and the sheep, because the blades are razor sharp. Mayenzeke reveals scars all along his forearms to prove that accidents do happen.

I left our intimate conversation feeling humbled by his story, and affirmed with the fact that it doesn’t matter what it is that you do, if you do it well and are the best at it, opportunities beyond your wildest imagination can become a reality in your life. The deep respect I have for those men that do back breaking work for such a small amount of money cannot be accurately described. Mayenzeke Shweni makes me proud to be South African. I am inspired. For the group of shearers that I got to interact with and chat to, Mayenzeke is just one of the guys, he gets no special treatment. They file out at the end of another grueling day to be taken to their temporary lodgings while they still have work in the area. Remember his name, if not for bragging rights against the Kiwis, Aussies and the English, then for the fact that he flies our flag high with hardly any recognition: Mayenzeke Shweni.

Please note; this is the story the English, Aussies and Kiwis do not want you to know about. So go ahead South Africans, share this story far and wide. Let them know that you know.

News
[Claire's Blog] Who Are You, Really?
I left feeling validated as a South African that a group of indigenous people, who had previously felt dismissed and forgotten in our recorded history, were finally seen and acknowledged in such a powerful way.
News
[PODCAST] On the Couch with Cape Talk
Join Carte Blanche on Cape Talk every Monday between 13:00 and 15:00 as we sit down on the Cape Talk Couch for a quick chat about our latest stories.
News
[FULL RESPONSE] Adoption Agony
We've made adoption agent Letitia van den Berg's full response and correspondence available online.
News
READ: Mzwandile Masina's Full Response
Former Ekurhuleni Mayor Mzwandile Masina responded to our questions relating to a high-speed car crash involving a luxury municipal vehicle and a truck in August 2020.