News
27 September 2009
Carte Blanche’s birthday campaign has delivered again, this time to the Charlotte Maxeke Johannesburg Academic Hospital. A state of the art digital theatre now makes endoscopic surgery on a par with the best in the world. Meet Timothy and Marvin, operated on just weeks ago, whose lives have changed forever.

To the untrained eye, any operating theatre looks high-tech. But on closer inspection this equipment is showing its age: a tangle of wires, a mechanical operating table, machines that belong in a medical museum - now all that's about to change.

Bongani Bingwa (Carte Blanche presenter): 'Thanks to the generosity of corporate South Africa this theatre - which has been in use for the last 28 years - is about to be replaced with a state of the art digital hanging theatre, taking paediatric surgery at this hospital well into the 21st century.'

Prof Peter Beale (Paediatric Surgeon): 'Without the equipment to be able to keep up with the rest of the world, we would fall very rapidly behind.'

Professor Peter Beale is Head of Paediatric Surgery. Every day he is faced with difficult cases, like that of three-year-old Carel Lourens. After five months of chemotherapy, the cancerous tumour in this little boy's abdomen has shrunk enough to be removed. Prof Beale believes the impact of the new equipment will be huge.

Prof Beale: 'Thanks to Carte Blanche, we can now compete with Red Cross Children's Hospital in Cape Town and surgery training centres throughout the world.'

The old theatre was stripped and technicians from Marcus Medical installed the new state-of-the-art equipment. Suspended from the ceiling is the latest in high definition technology - two wide screen monitors, a touch screen to capture information, as well as high resolution digital recording equipment. After just a few days the new digital hanging theatre was ready for action.

Dr Jacinta Shung (Anaesthetist): 'This is one of the only ones in the world that you can turn around.'

Dr Jacinta Shung will be training anaesthetists on the new anaesthetic machine which cost R1-million.

Dr Shung: 'The software is new. The ventilator is quite a nice ventilator - so you reach children of all sizes. You can do a 900g baby and you can do a 150kg man on it, whereas before we used to have to change the bellows, and there are lots of things you used to have to change. And we had to get different machines and we ended up working with five or six machines because you use one feature of every machine, because no machine was ideal. This has everything in one.'

Another improvement is the new operating table, which cost R650 000.

Prof Beale: 'Well, this is a state of the art modern operating table, which is electronic and controlled by console - which allows you to alter the shape of the bed, and the level of the bed in many ways. The table we had, had been here for 30 years - and this one replaces that and is also a screening table. In other words, you couldn't take X-rays through it, or screen a patient through it.'

The sponsors, who together contributed over R3-million towards the theatre, were invited to the unveiling and welcomed by Carte Blanche executive producer George Mazarakis. 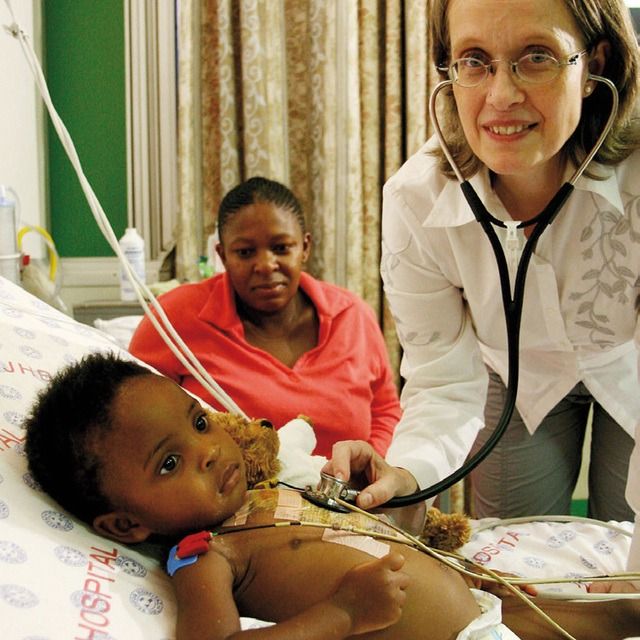 George Mazarakis (Carte Blanche Executive Producer): 'We are absolutely humbled by the fact that you've trusted us enough to give us your money and to know that it is going to a valuable place.'

After revealing just how their money had been spent, theatre staff celebrated this new beginning by pelting guests with streamers.

And once the ribbon was finally cut, they gave full voice to their appreciation and excitement.

Dr Khaya Mfunyane (CEO - Charlotte Maxeke Johannesburg Academic Hospital): 'It goes a long way in addressing the period we are living in economically. Please keep the good work, you've clearly made a mark on the continent for our hospital.'

One of the first children to be operated on in the new theatre is 13-month-old Timothy Beukes.

Priscilla Beukes (Foster mother): 'Timothy's mum had a stroke after she gave birth to Timothy, and after six weeks Timmy was still in hospital, so we decided to take him. We never really knew what was wrong with Timothy, but we took him home.'

Raven Padayachee (Foster father): 'It's been tough. At the moment he's been struggling - crying a lot... really crying with pain.'

The team is going to perform a gastric wrap, which means wrapping his stomach around the lower end of his oesophagus to stop the reflux. The endoscopic surgeon is Dr Bob Banieghbal.

Dr Bob Banieghbal (Endoscopic surgeon): 'We're going to inflate the abdomen with carbon dioxide to make sure we have space to see what we are doing.'

Endoscopic surgery is done through tiny portholes in the abdomen. Using a camera and miniature instruments the doctors can see exactly what they are doing on high resolution screens in front of them.

Dr Banieghbal: 'I'm going to insert the liver retractor and drop the table down.'

With the retractor holding Timothy's liver out of the way, the team can now start working on his stomach.

Dr Banieghbal: 'We're disconnecting any blood vessels that are holding the stomach so that it becomes more mobile. So once we have it more mobile, we can actually go around it. And turn it on itself.'

Dr Banieghbal makes an opening underneath Timothy's oesophagus, through which he will be able to pull part of the stomach, and wrap it around the oesophagus.

Using a tiny needle the surgeon sews one side of the stomach to the other, making sure that Timothy will no longer suffer from reflux and all the ensuing complications. Gastric wrap surgery isn't new, but the level of care that this hospital can now offer children is far superior to before.

Dr Banieghbal: 'Previously we had an old generation equipment with lower resolution. So this kind of an operation would have been a lot more challenging and more hazardous. With the better technology we do a better operation.'

The hospital now expects to double the number of endoscopic procedures performed every month. And the next patient is 5-year-old Marvin Makhombothi. He also has a problem with reflux, and often vomits after eating. His mother Christine stays with him while the anaesthetist puts him under. Endoscopic surgery is minimally invasive, so little Marvin will have less post-operative pain, and be able to go home sooner. 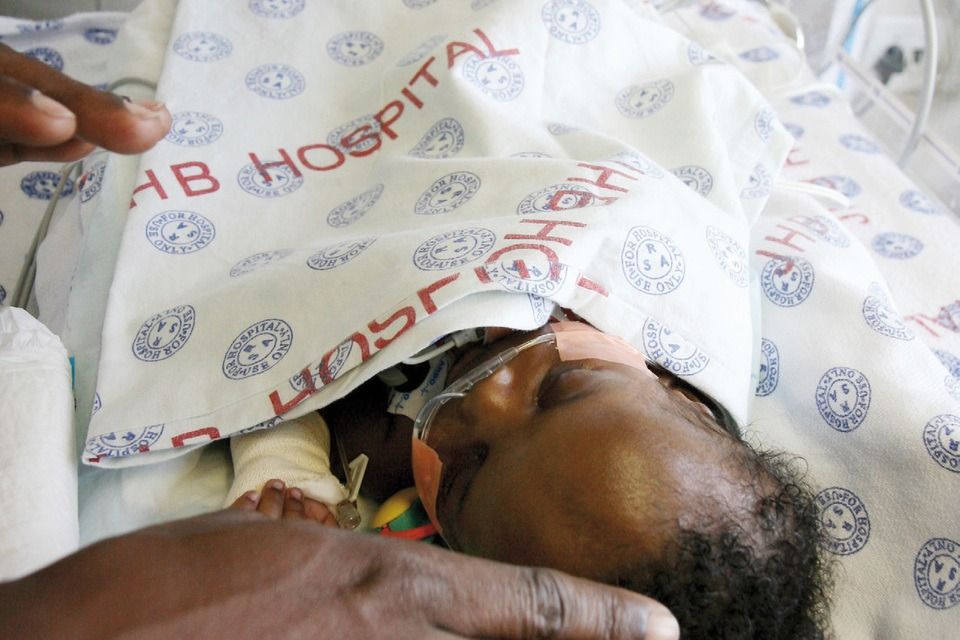 Dr Banieghbal: 'This operation was made more complicated than normal surgery we do because the opening in the diaphragm was much larger, and because of it the stomach has collapsed inside the chest which is not something that we see that often. Because of that we had to pull the stomach down into the abdomen and release adhesions, close the defect, and do the wrap.'

After the doctors do the last stitches up, the doctors wake Martin up and send him to his mother waiting in the ward. Just one more child for whom the sponsors have made a difference.

Sakkie O'Neil (Nedbank): 'It's an absolute delight to be part of the process, where actually you could see that somebody took it from an idea right down to delivery.'

Biren Valodia (Mediclinic): 'This 'Making a Difference' campaign is very commendable, and we are very glad to be associated with this campaign.'

Tina Eboka (Standard Bank): 'If we wake up every day and [ask], 'Today, did I make a difference?' Then I can say I made a difference to that one.'

Gernot Pansi (Marcus Medical): 'This theatre now boasts state of the art equipment, which I am sure will make a big difference to many children in the community.'

Isabelle Makuta (Group Five): 'We feel that really we have done the right thing, so we are truly grateful that we have been part of this initiative.'

R90 000 of Coal Procurement's R1-million donation went to this theatre.

George Mayer (Coal Procurement): 'This is outstanding. My daughter was treated at the Jo'burg Gen many years ago and is very well. And to see what the kids today can have, it makes it even more worthwhile.'

In the children's waiting room outside the paediatric theatre, is one of dozens of TV sets donated by LG.

Dr Michelle Potgieter (LG Electronics): 'Within this environment children will come here before they go into theatre, and the TV's will make a difference.'

Two weeks after his surgery Marvin is back in the saddle of his favourite bike, and he's no longer in pain.

The small scars in his tummy will eventually disappear, and he can now get on with the important business of being a child.

Video
Rugby rumpus
𝗧𝗵𝗶𝘀 𝘀𝘁𝗼𝗿𝘆 𝗼𝗿𝗶𝗴𝗶𝗻𝗮𝗹𝗹𝘆 𝗮𝗶𝗿𝗲𝗱 𝗼𝗻 𝟰 𝗗𝗲𝗰𝗲𝗺𝗯𝗲𝗿 𝟮𝟬𝟮𝟮. Intense and full of drama, rugby union is one of the globe’s biggest sports. World Rugby has never been more competitive, with traditional rivalries like the Springboks and the All Blacks often decided by a single point . With such fine margins, referees hold the key to ensuring fair play. But the performance of match officials is increasingly in the spotlight, with every controversial decision analysed and criticised. With so much at stake, and innovative technology advancements at their fingertips, why are some referees still getting it wrong? Your favourite episodes are now available on Carte Blanche: The Podcast: https://bit.ly/PodcastCB
Video
All choked up
𝗧𝗵𝗶𝘀 𝘀𝘁𝗼𝗿𝘆 𝗼𝗿𝗶𝗴𝗶𝗻𝗮𝗹𝗹𝘆 𝗮𝗶𝗿𝗲𝗱 𝗼𝗻 𝟭𝟯 𝗡𝗼𝘃𝗲𝗺𝗯𝗲𝗿 𝟮𝟬𝟮𝟮. Another year, another debacle for South African cricket. After a promising win against India, defeat to Pakistan and then – of all countries - The Netherlands sent the Protea’s crashing out of the T20 World Cup in Adelaide. It’s the latest in a series of painful exits from the 50 and 20 over global showdown since re-admission in 1992. Always full of promise, the Proteas have consistently failed to deliver – the much-maligned "chokers" tag weighing ever more heavily. Years of maladministration, with hundreds of millions of rands in losses, have left the game in an existential crisis at a time when the very nature of world cricket is changing, and cricket boards are all turning to domestic T20 leagues for financial salvation. How does South African cricket pick itself up and move forward in a time of upheaval for the world game? Your favourite episodes are now available on Carte Blanche: The Podcast: https://bit.ly/PodcastCB
Video
[FROM THE ARCHIVES] Making a Difference in Sebokeng
𝗧𝗵𝗶𝘀 𝘀𝘁𝗼𝗿𝘆 𝗼𝗿𝗶𝗴𝗶𝗻𝗮𝗹𝗹𝘆 𝗮𝗶𝗿𝗲 𝗼𝗻 𝟭𝟬 𝗢𝗰𝘁𝗼𝗯𝗲𝗿 𝟮𝟬𝟮𝟭. For 13 years and, together with its generous partners and donors, the Carte Blanche Making a Difference Trust has managed to make light work of building and capacitating critical care facilities for children in 11 state hospitals in South Africa. Through this process, thousands of young lives in the country have been assisted. Now, the Trust has embarked on yet another ambitious project by adding a brand new Lower-High Care Unit at the Sebokeng Regional Hospital in Gauteng – once again making a difference in those families living in a struggling community.
News
Tygerberg Hospital Neonatal & Paediatric Cardiothoracic ICU Project
Let alone the numerous and inevitable impacts of COVID-19 on the Trust’s work, this specific Cardiothoracic NICU & PICU project at Tygerberg Hospital has been complicated due to the many objectives we are attempting to meet.