News
30 August 2009
It’s been a year since the launch of the Carte Blanche campaign to fund paediatric surgical units at six State hospitals. A year in which, thanks to our generous sponsors, we’ve handed over much-needed equipment, including a heart lung machine which saved 45 young lives in the first 100 days of its use. This week the spotlight is on Bloemfontein’s Universitas Hospital, where millions has been spent on new equipment for neo-natal wards.

Little Oradile Khokhonyane weighed only 810g when he was born at the Universitas Hospital in Bloemfontein in July. Because of problems with hypertension, his mother Gladys gave birth at only 27 weeks. There were concerns that he wouldn't make it.

Gladys Khokhonyane (Mother): 'Yes, I am worried by what happened about this baby ... because too small like this.'

Gladys is a student and a single-mother, who lives 20km outside Bloem. She travels to the hospital twice a day to be with her little son. Now he weighs just more than a kilogram. Oradile's chances for survival at this under-equipped State hospital would have been slim, were it not for the Carte Blanche 'Making a Difference' campaign, launched in July last year. Oradile has been treated on no less than six of the new machines donated through the campaign. Paediatric registrar Dr Riana Woite says that made a huge difference.

Dr Riana Woite (Paediatric Registrar): 'Luckily we now have the correct equipment that we can act; once they are in theatre we can incubate, we can bring them here and thanks to oscillators especially which protect these very small lungs, the outcome is much better, so in his case it had a very good outcome.'

Carte Blanche first visited the Universitas Hospital a year ago. We were told that annually, up to a hundred underweight and sick babies were turned away because of a shortage of ICU beds and proper equipment.

[Carte Blanche 7 September 2008]: Professor Andre Venter (HOD: Universitas Hospital): 'One of the problems we have in the Free State is I think sometimes we have God's forgotten children down here. I think it is a wonderful opportunity for us and I hope that it is going to be a very successful venture for us.'

And it has been for Universitas and the paediatric and neonatal units at five other State hospitals.

Derek Watts (Carte Blanche presenter): 'When we launched the 'Making a Difference' campaign the economy was already into a slide. Yet we reached R20-million in a couple of months and now it's up to nearly R60-million. You've got to say that the corporate South Africa is incredibly generous.

A total of R6-million has been used to upgrade and refurbish parts of Universitas Hospital. R4.5-million was used to buy new equipment for the neonatal ICU and high care wards. Sponsors officially handed over the equipment last week and were taken on a tour to the different wards.

Prof Venter: 'There will not be another neonataI ICU, public or private, that will be as well equipped as we are at this very moment.'

Professor Andre Venter is the HOD at Universitas Hospital and says hopefully they will never have to turn away babies again.

Prof Venter: 'We will be able to anything within reason that we set our hearts to. Our babies will get the best possible treatment here; the best possible diagnosis here that you would get anywhere in the world.'

Like the treatment Karabelo Nchakha is getting, born at 34 weeks and weighing only 1,5kg.

Derek: 'These modern incubators are a blend between a mini-isolation ward and a mother's womb. In here the temperatures are monitored every second of the day, giving babies like tiny Karabelo here a chance and after all this can be their home for up to three months. '

Five Infant Care Centres or 'Cosy Cots', have been donated to the neonatal ICU ward. They are essential in keeping premature babies alive. 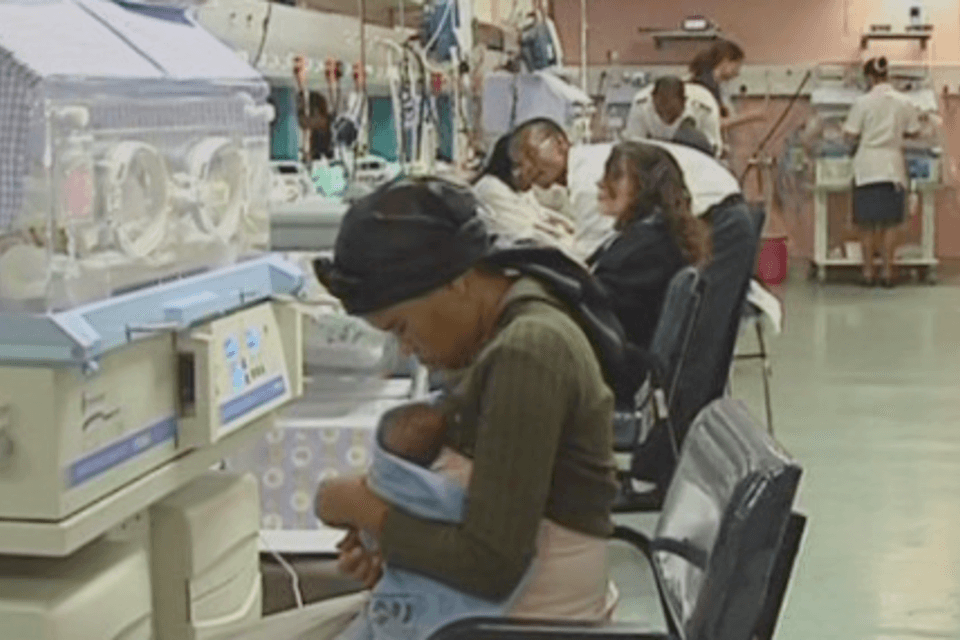 Dr Woite: 'Well, what is special about these Cosy Cots is that each baby has everything it needs. It has its own resus-unit, it has its own phototherapy lamp, its own warmer, everything you need for each baby, so when anything goes wrong, you don't have to run around or get anything.'

Derek: 'This neonatal ICU unit is busy, it is very busy. It serves virtually the whole Free State, plus surgical cases from the Northern Cape. The five new Cosy Cots arrived just this week and already every bed is full, apart for this one waiting for a case to arrive from Welkom.'

And it wasn't long before baby Nomthandaza Jacobs arrived. Born at home a few days before, she had an obstruction in her bowel. Dehydrated, she had to be rushed to the neonatal ICU.

Derek: 'Riana, what have you ascertained so far?'

Dr Woite: 'We got the baby, we've put the basic monitors on, she is saturating fairly well in room air... take the basic vitals, test the pulse, we've got the temperature probe on and you can see she is a little bit cold. But what specifically the Cosy Cot does now is it takes the temperature of the baby and automatically starts to warm immediately, which is very good. We measure the baby and then see whether she has ivy lines up and then we will start running fluids and when the basic vital signs are all intact, then I'll do a thorough examination.'

It wasn't the needles that upset mom Johanna, but the change in patterns and numbers on the monitor screen. She didn't know if the fluctuations were a good or bad sign. Dr Woite explained the changes.

Dr Woite: 'You must calm down a bit. It's all a bit much, too quickly. Are you worried about something on the screen?'

Dr Woite: 'The top one is her heart, but for her age it's perfect.'

Johanna: 'And that one... what is that, the breathing?'
Dr Woite: 'Yes, but it mimics the heartbeat. So, they go together. And the yellow one shows how she breathes. So, she's breathing a little bit slower, but everything is perfect. [Are you] ok?'

In the neonatal high care ward next door, Jessica De Valdoleiros' 11-day-old twins were improving. They had been born prematurely before the new equipment arrived. Kaedon weighed 1,9kg, while Ardith weighed 1,6.

Jessica De Valdoleiros (Mother): 'When I arrived here, because the caesarian wasn't planned, there was no incubator at the beginning, so it's very good that we got new equipment, at least other mothers won't have the same problem I had - they will have an incubator for their children.'

Paediatric registrar Benice Powell says in the past they have had life or death situations because there wasn't always the right equipment to treat premature babies.

Derek: 'Bernice, it must mean a lot to you having the right equipment here?'

Benice Powell (Paediatric Registrar): 'Yes, we have to monitor them very closely, some of these babies, before we even know it they can get really ill, their immune systems are still premature, so we need proper equipment to monitor them closely so that we can pick up things when they go wrong and pick it up early.'

The new equipment will make a huge difference in saving children's lives - and that was the goal when George Mazarakis, Carte Blanche's Executive Producer launched this campaign.

Derek: 'George, after all the admin, the office work, now you can see how it is making a difference?'

George Mazarakis (Executive Producer: Carte Blanche): 'It's extraordinary, Derek, to see the actual lives that are being saved, to see the babies in the neonatal unit, many of them are around 800g, just under a kilogram, many of them, just quite humbling experience.'

And it's not just new equipment - KFC has donated R1.5-million to refurbish the paediatric high care ward.

Derek: 'Getting the KFC paediatric high care unit up to scratch has been more difficult than anticipated. It is certainly more than just a paint job. They had to put in a new air conditioning which you can hear now, the new air and oxygen ports ... a total refurb, and it will take another two months, but when it's finished it will be top-class.'

The R6-million used to upgrade and refurbish the neonatal and paediatric wards of universitas was donated by:

Mohale Ralebitso (ABSA Group Executive: Marketing): 'I cannot express how moving it is to see that these young lives now stand a chance and it's thanks to the donations that ABSA and other companies have given.'

Douw Steyn (Businessman): 'As a businessman I try to help where I can because I know that the government can't shoulder the whole burden.'

Chad Griffin (Coal Procurement MD): 'As a small company it's really nice to know that we've made an impact.'

Tina Eboka (Standard Bank Group Executive): 'The monies that have been donated makes a difference for a child to have a future.'

At the hand-over function Absa and Standard Bank were inspired by these little boys from St Andrews School in Bloemfontein who's grade 1 class had raised R40 000 for the hospital. The banks offered to match their contribution.

And to Carte Blanche, the Universitas Hospital had a special way of saying thank you.

George: 'That's wonderful, it's got: 'Carte Blanche Making a Difference; Beds of Hope; With Gratitude.' Thank you so much. Thank you very much.'

Video
The Professor and the plant
𝗧𝗵𝗶𝘀 𝘀𝘁𝗼𝗿𝘆 𝗼𝗿𝗶𝗴𝗶𝗻𝗮𝗹𝗹𝘆 𝗮𝗶𝗿𝗲𝗱 𝗼𝗻 𝟮𝟳 𝗠𝗮𝗿𝗰𝗵 𝟮𝟬𝟮𝟮. For centuries, humankind has been on an endless hunt for the Fountain of Youth. But perhaps it wasn’t a fountain we should have been looking for. A chance encounter with a remarkable plant with an ability to revitalise itself within a few hours of light rain brings hope. UCT Professor Jill Farrant is working to isolate the gene sequence of these plants to find out what secrets they could unlock. They’re called the Resurrection Pants, a very rare species seemingly able to come back from the dead. These plants are known to lose up to 95 percent of their water capacity, only to bloom back to life in as little as 12 hours after rain. So, could these plants be the real Fountain of Youth or perhaps reveal how we might survive the impacts of climate change?
Video
An urgent call
𝗧𝗵𝗶𝘀 𝘀𝘁𝗼𝗿𝘆 𝗼𝗿𝗶𝗴𝗶𝗻𝗮𝗹𝗹𝘆 𝗮𝗶𝗿𝗲𝗱 𝗼𝗻 𝟲 𝗠𝗮𝗿𝗰𝗵 𝟮𝟬𝟮𝟮. For at least 30 years, the South African Bone Marrow Registry has been matching patients in need of life-saving stem cell transplants with donors. But for 14-month-old Gracey Green from Atlantis in the Cape, the challenge is a far more difficult one: people of colour are heavily under-represented on the registry, making it difficult to match donors. Diagnosed with a rare blood cancer, Gracey’s hope lies in a viable bone marrow transplant. Carte Blanche joins the hunt as the Registry goes all out to find Gracey a match.
Video
[FROM THE ARCHIVES] Making a Difference in Sebokeng
𝗧𝗵𝗶𝘀 𝘀𝘁𝗼𝗿𝘆 𝗼𝗿𝗶𝗴𝗶𝗻𝗮𝗹𝗹𝘆 𝗮𝗶𝗿𝗲 𝗼𝗻 𝟭𝟬 𝗢𝗰𝘁𝗼𝗯𝗲𝗿 𝟮𝟬𝟮𝟭. For 13 years and, together with its generous partners and donors, the Carte Blanche Making a Difference Trust has managed to make light work of building and capacitating critical care facilities for children in 11 state hospitals in South Africa. Through this process, thousands of young lives in the country have been assisted. Now, the Trust has embarked on yet another ambitious project by adding a brand new Lower-High Care Unit at the Sebokeng Regional Hospital in Gauteng – once again making a difference in those families living in a struggling community.
News
Tygerberg Hospital Neonatal & Paediatric Cardiothoracic ICU Project
Let alone the numerous and inevitable impacts of COVID-19 on the Trust’s work, this specific Cardiothoracic NICU & PICU project at Tygerberg Hospital has been complicated due to the many objectives we are attempting to meet.