News
08 January 2019
Looking back at five favourite episodes of The Big Bang Theory.
Subscribe To Watch

It’s been twelve years of takeout food, work lunches, and not sitting on Sheldon's spot. We joined them for Halo night, laundry night, and anything-can-happen Thursdays. Now The Big  Bang Theory is coming to an end and many a fan will shed many a tear as they say goodbye to their favourite gang of lovable nerds and their queen, Penny.

To mark the momentous occasion of the final season (starting Wednesday 9 January on M-Net) we’re firing our synapses in order to wind our way down memory lane as we compile a list of our five favourite episodes from seasons one to eleven.

It may be a sitcom – and one of the below episodes features a moment that made us laugh harder than any other – but it’s telling that the majority of our favourites focus on moments that emphasise the affectionate bond between the characters that gave the show its heart.

It’s Christmas time! Or Saturnalia season, if Sheldon has his way. Penny falls for a scientist, much to Leonard’s chagrin, but she’s soon drowning her sorrows in “eggnog” when he turns out to be a less than savoury character. Sheldon, meanwhile, is burdened with the non-optional social convention of buying Penny a Christmas gift. 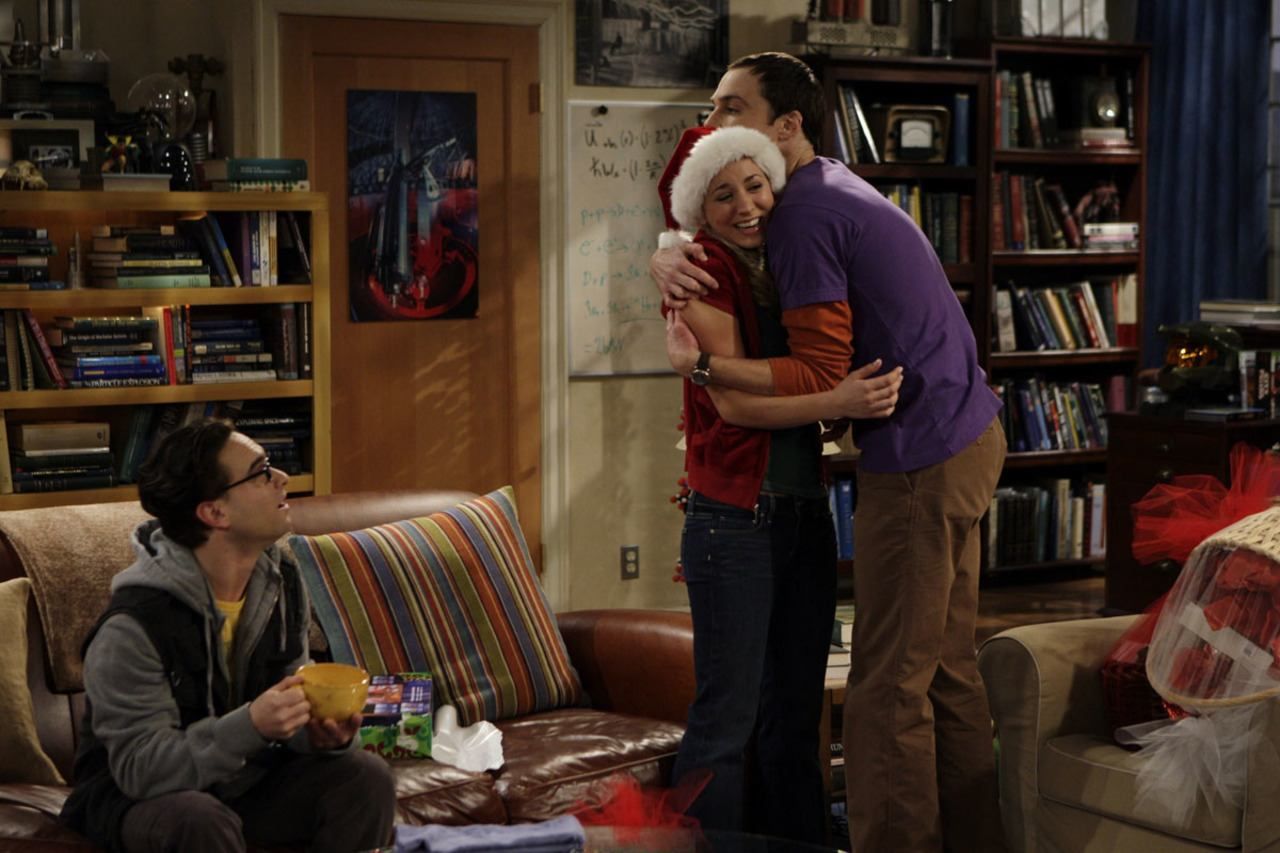 The episode continued establishing much of what made the show special: Leonard and Penny’s toing and froing, Sheldon’s special brand of awkward, and a good dose of Howard’s sarcasm. But the standout moment that really lands this episode on the list is Penny giving Sheldon a napkin signed by Leonard Nimoy. Sheldon is so overwhelmed (because he can now grow his own Leonard Nimoy) he overcomes his aversion to human contact in order to thank Penny with a hug.

This episode celebrates two things we love about the show: its humour and its high-profile cameos. During the course of the show, a host of stars from science, science fiction, and beyond paraded through, including Neil deGrasse Tyson, Bill Gates, Elon Musk, Katee Sackhoff, and Stan Lee. Besides these starry additions, The Big Bang Theory was constantly peppered with sharp, witty dialogue, and a good dose of physical comedy. 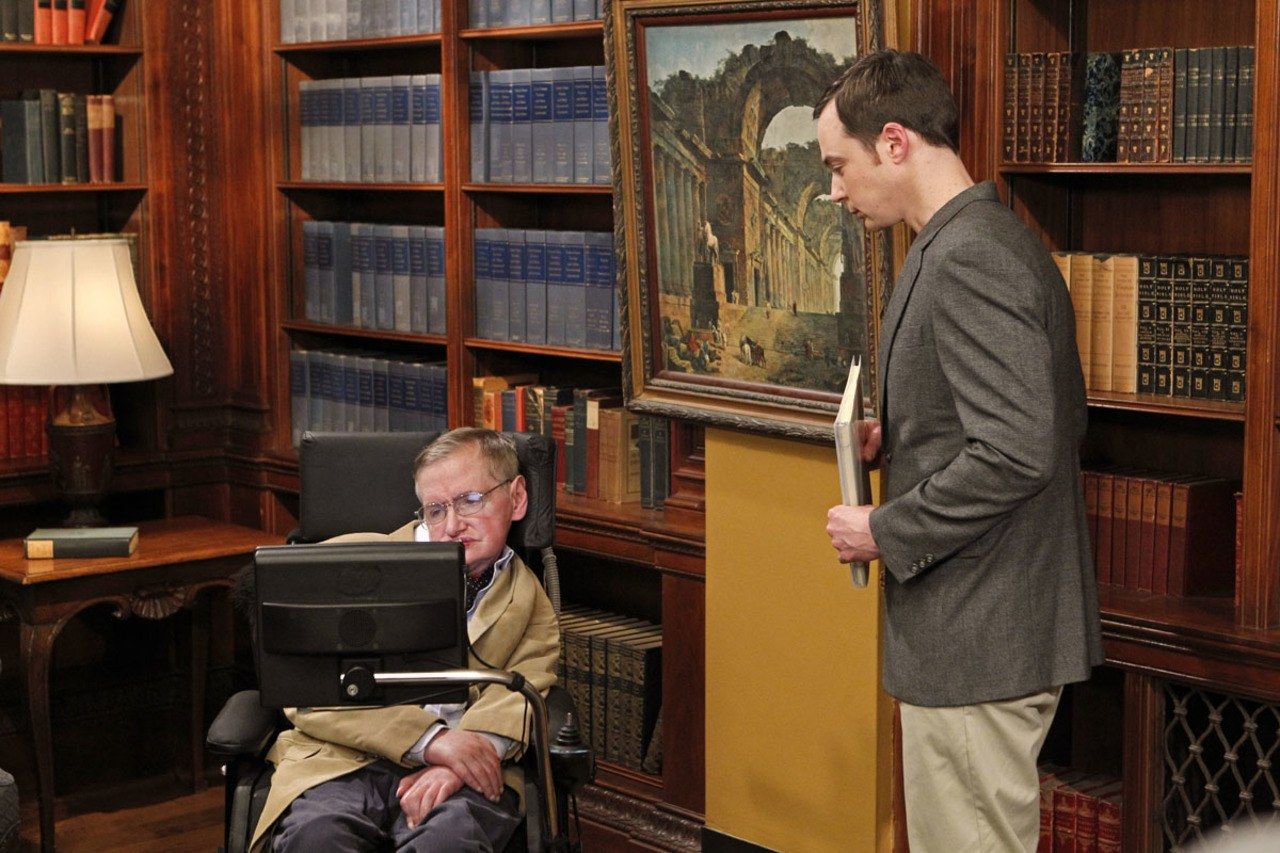 The physical comedy is on delightful display in The Hawking Excitation when Howard has the power to organise a meeting between Sheldon and Stephen Hawking. In a desperate attempt to meet his hero, Sheldon embarks on a parade of crazy errands that culminates in the moment he’s forced to don a French maid’s uniform to work. Just when you thought it couldn’t get any better Stephen Hawking appears, only to point out an error in Sheldon’s paper!

At the start of the series, much of Howard’s humour is derived from his laughable attempts to woo women. A lesser sitcom would have kept him on this level, but instead the character goes from laughable to lovable. Much of Howard’s depth comes from his troubled relationship (or lack thereof) with his absent father. Initially a crutch for many of Howard’s jokes, it’s eventually dealt with more hands-on, particularly in this episode. 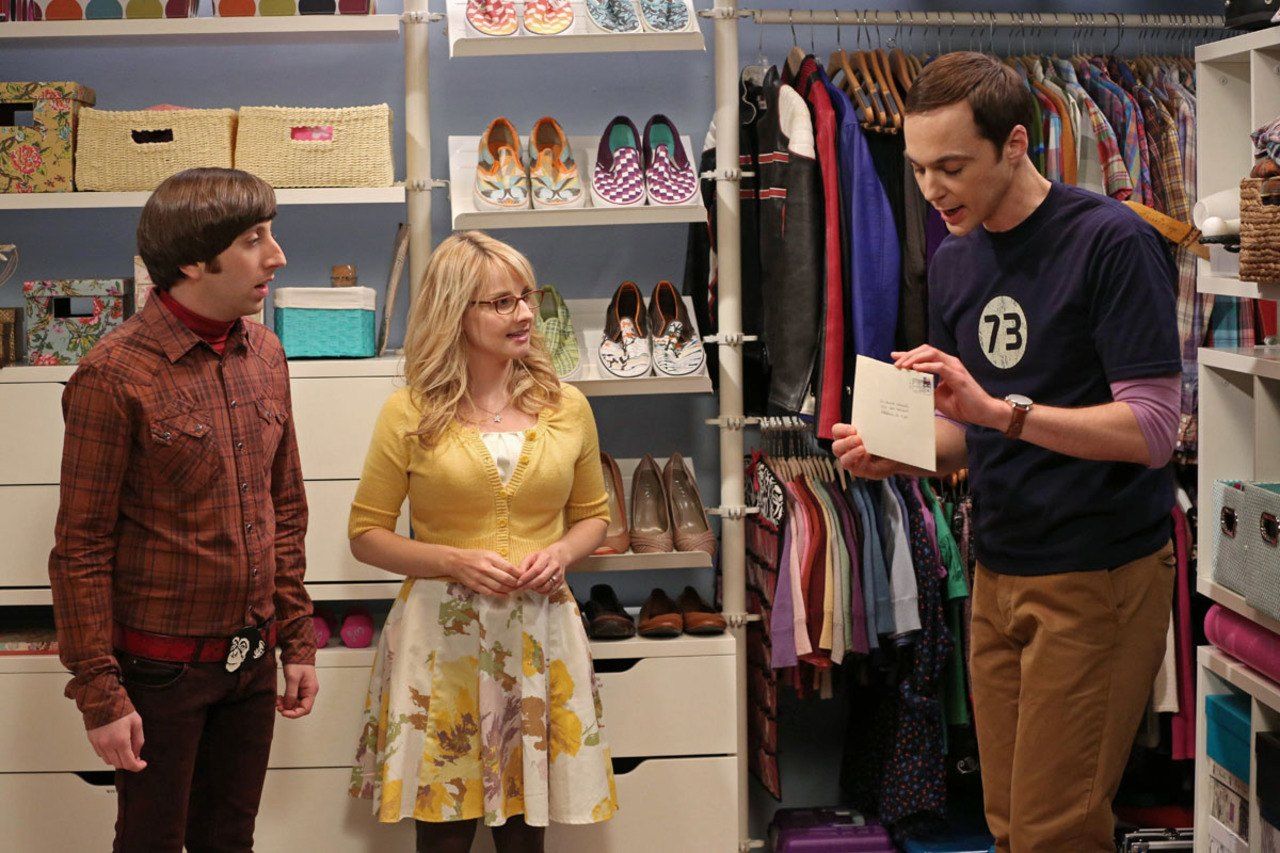 Reluctant to clean their disaster zone of a closet, Howard and Bernadette trick the fastidious Sheldon into doing it for them. During his cleanup, he uncovers a letter from Howard’s father. Howard wants nothing to do with it until he finds everyone else has read it. Torn about what to do, his wife and friends, in a heartbreaking yet poignant moment, provide him with different possibilities of what it says, only one of which is true.

If the previous episode didn’t make you tear up, this one certainly would have! It’s similar to the latter in that it shows the continuing growth of Howard Wolowitz, but this time directed at the love and affection he has for Bernadette. The Romance Resonance also reminds us of the delights of Sheldon’s germaphobia and displays a softer, sentimental side to Penny. But the moment that tops it all is when everyone visits Bernadette in hospital where she is quarantined after a lab accident. 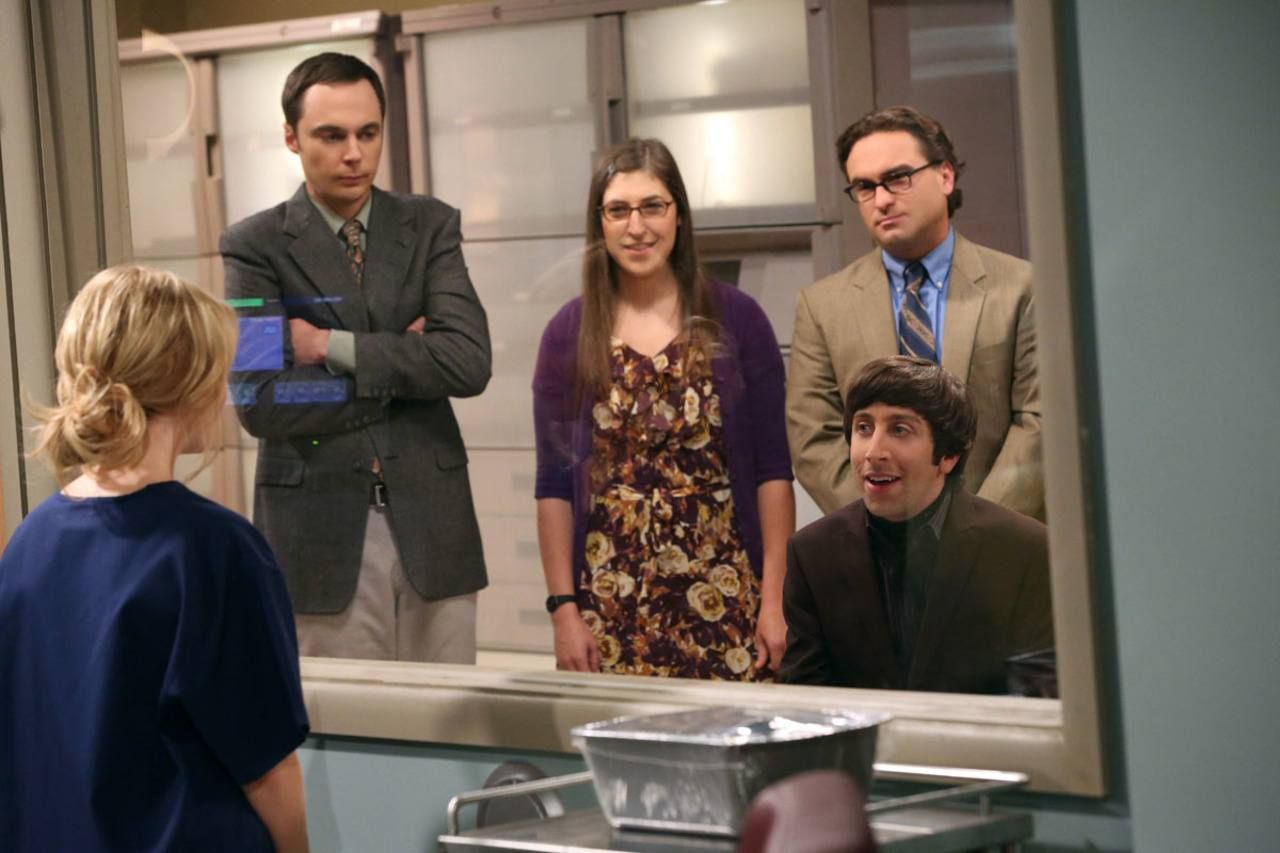 Another hallmark of the show is the quirky songs that appear throughout, like Soft Kitty and Thor and Dr. Jones, but the sweetest is the song to Bernadette that Howard writes and the whole gang sings, marking an ode to the characters’ friendship and the actors’ chemistry.

When the show started, we never thought Sheldon would ever get a girl, boy, or sock puppet (especially before Raj!), let alone get married – but he finally did. In the season eleven finale, Sheldon and Amy tie the knot. That’s momentous enough to land the episode a spot on this list, but it also features the magician Teller and Oscar-winning actress Kathy Bates as Amy’s parents, as well as Jerry O’Connell as Sheldon’s brother. Let’s not forget Amy’s call to “just do you” when she chooses the wedding dress of her dreams and the hug between Leonard and Sheldon affirming that friendship is stronger than any roommate agreement. 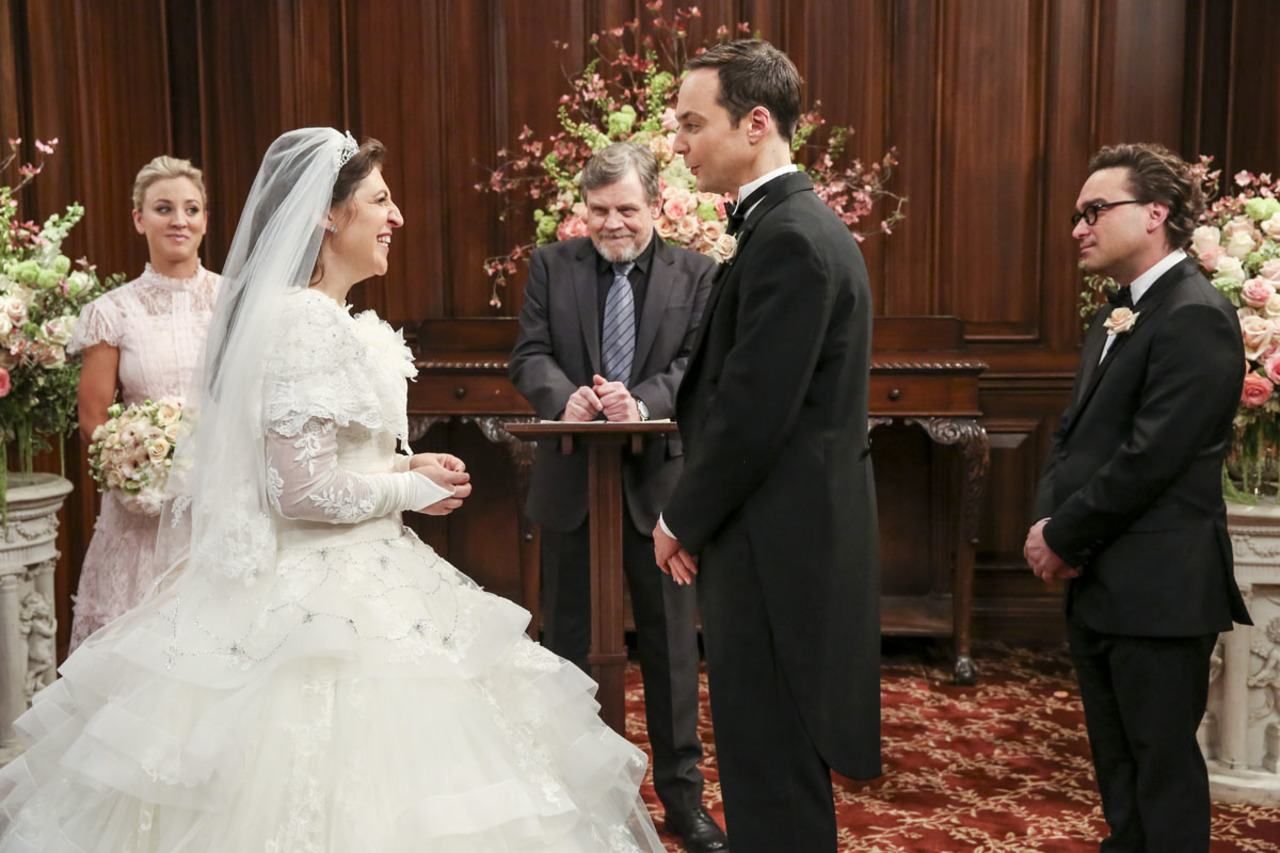 There’s also another cameo, and it totally takes the wedding cake. Leonard, Sheldon, Howard, and Raj are all massive Star Wars’ fans, so it was a total triumph when James Earl Jones and Carrie Fisher came on the show…and about time too, given all the Star Trek stars who’d already made their mark (most notably Wil Wheaton). But the most unexpected was certainly Mark Hamill, given there was no warning during the episode. Howard (in a wonderful display of genuine shock by actor Simon Helberg) just opens the door and there he is! To top it off, Hamill ends up officiating the wedding and agrees to a Q&A with the guests!

Which episode is your favourite? Share it with us on social media using #MNet101.

Make sure you tune into the twelfth and final season of The Big Bang Theory every Wednesday at 19:30 from 9 January.

You can also enjoy more of Sheldon with the second season of Young Sheldon at 19:00 on the same day.

Video
Coming up on 5 February - Air tales
Thousands of flights take to our skies every day, and passenger lives depend on a safety-first regime. In what is supposed to be a tightly regulated industry, we ask: is the Civil Aviation Authority on top of their game? Your favourite episodes are now available on Carte Blanche: The Podcast: https://bit.ly/PodcastCB
Video
The big coal switch
𝗧𝗵𝗶𝘀 𝘀𝘁𝗼𝗿𝘆 𝗼𝗿𝗶𝗴𝗶𝗻𝗮𝗹𝗹𝘆 𝗮𝗶𝗿𝗲𝗱 𝗼𝗻 𝟰 𝗗𝗲𝗰𝗲𝗺𝗯𝗲𝗿 𝟮𝟬𝟮𝟮. Coal - it's a commodity in high demand - locally and globally. Power stations need it, export markets want it, and criminals are after their slice of the action. The black market for coal is thriving, and a devious new trend is hitting the industry. Syndicates are paying willing transport company drivers to replace their loads of high-grade coal with a lower grade product. The driver pockets a cut of the profits, while the criminals sell the loads of coal back to the legitimate market at a premium. It’s called coal switching and Carte Blanche has the inside edge on how it’s done, and who’s pocketing the lion’s share. Your favourite episodes are now available on Carte Blanche: The Podcast: https://bit.ly/PodcastCB
News
The long and short of it – My Kitchen Rules SA
Your thoughts on The Long Table.
News
5 Great Christmas TV Episodes
Christmas in TV Land.