With the Blind Auditions done and dusted, fans of The Voice South Africa witnessed some exciting twists and turns to the popular show format this week. Instead of moving on to The Battle rounds from The Blinds - as was the case in the first two seasons -  The Voice SA Season 3 plunged straight into The KnockOuts, with coach LIRA’s team members igniting the stage in the hope of staying in the competition. To add to the thrills, coach LIRA was tasked to cut her team of thirteen talent to only six  - in a fresh, but nerve-wracking way!  At the end of each performance, the Afro-soul star had to allocate the act a spot in either the "Safe Zone” or “Danger Zone”.

Landing in the Safe Zone meant a guaranteed spot in The Battles, while the Danger zone allowed LIRA to make a final decision at the end of all the performances. That’s IF one of the other coaches didn’t decide to steal the Danger Zone talent for their own teams! Then, bubbly host Anele Mdoda introduced another surprise and worldwide first for The Voice South Africa: The Strepsils KnockOut Viewers’ Save.  For the first time ever in this phase of the competition, The Voice SA fans have the opportunity to bring someone for whom there was no space in a coach’s team back onto the show.

This week viewers can vote for four phenomenal female performers - Part–time musician Lara Joplin (29) and artist and waitron Nikki van Niekerk( 33), both from PE,  Hoopstad student Carmen Basson (19), and business analyst Ralyeen Padayachee (27) who is originally from Pietermaritzburg.  Voting takes place via SMS, mobi or web, with a limit of 100 votes per platform.

SMSs cost R1.50 per SMS, while voting on mobi and web is free. All info on how to vote as well as the terms and conditions for voting are available  at https://bit.ly/2YDAXq7 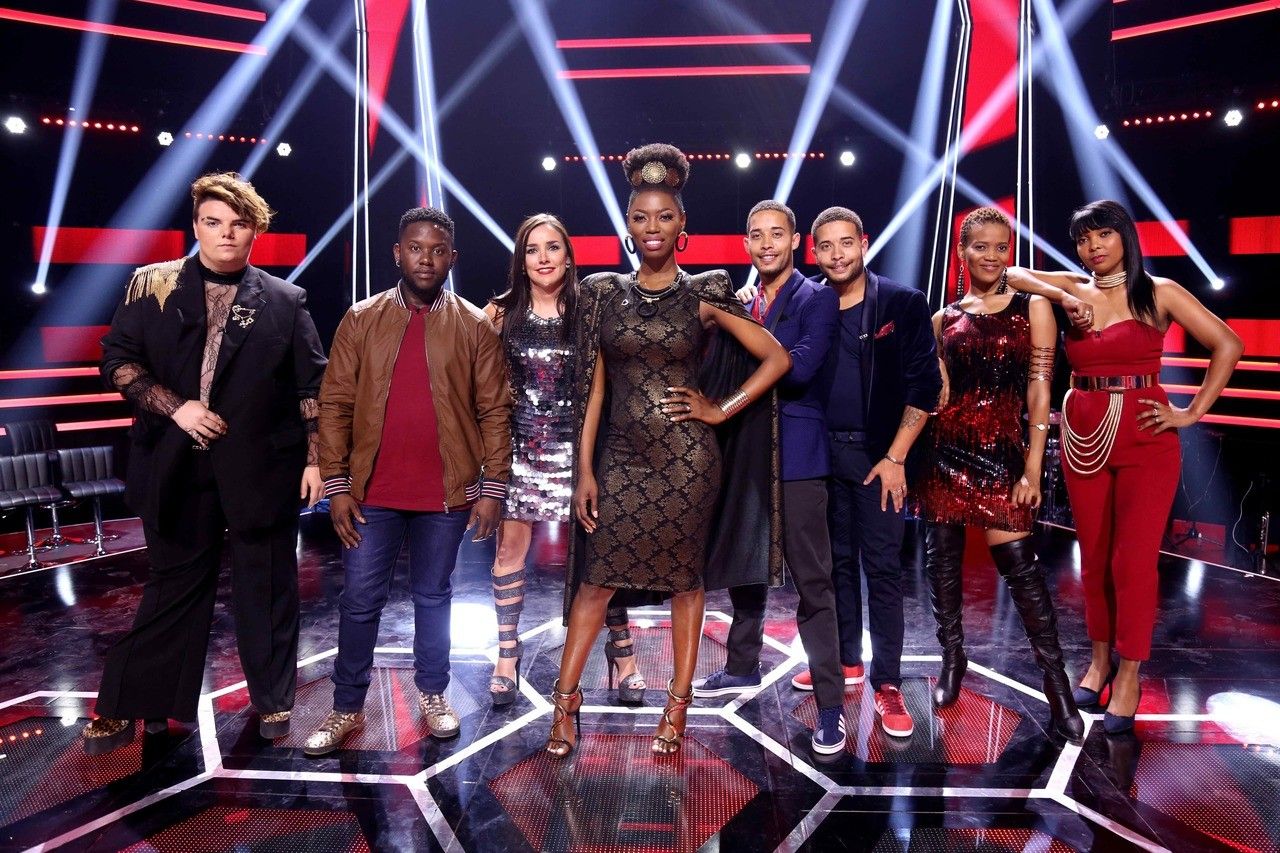 The six acts that will definitely perform again in The Battles in #TeamLIRA are Petro De Villiers (36) from Cape Town; Krista Jonas (29) from Cape Town; Yahto Kraft (18) from Alberton; Slindo Zondo (29) from Durban; Sbu Dludlu (34) from Duduza; and the PJ Twins (26) from Bonteheuwel

Mo George (21) from Cape Town was stolen by #TeamVanCoke, Ross Charles (26) from Durban by #TeamRiky, and Corneil Muller (32) from Bloemfontein by #TeamRiana.

Next week it’s #TeamRiky’s turn to go through the emotional rollercoaster of the KnockOuts.

First up to perform was Nikki van Niekerk (33) from Port Elizabeth with the White Stripes anthem “Seven Nation Army”. Coach Riky Rick commented that it was the performance of an artist who is comfortable, and LIRA said it gave her goosebumps. “I couldn’t be prouder,” she said, but added that she needed more time to think, so "for now" she was placing Nicky in the Danger Zone. Which immediately made Nikki eligible to be poached by one of LIRA’s competitor coaches. But the coaches were all keeping their options open, and Nikki watched the rest of the evening unfold from the Danger Zone.

Mo George (21) from Cape Town chose Adam Lambert’s “What Do You Want From Me”, to prove that he can do more than just ballads, he said. His coach was concerned, because vocally it is a very challenging song, but his strategy seemed to work because coach Francois van Coke commented on what a “multi-faceted performer” he is. Both Francois and Riana commented on how much they wanted to see Mo stay on in the competition, which left LIRA with a difficult decision: put Mo in the Safe Zone, on #TeamLIRA, or risk seeing him stolen? She took the chance and relegated Mo to the Danger Zone, but before Mo could even reach the Danger Zone, Francois hit his button and grabbed him for #TeamVanCoke!

With #TeamLIRA now down one act, her next talent on stage was 20-year-old Krista Jonas from Cape Town, singing Katy Perry’s “Rise”. “I loved that, I thought it was intense and powerful,” said coach Francois and LIRA obviously agreed, because Krista was the first vocalist who made the #TeamLIRA Safe Zone!

Carmen Basson, the 19-year-old student from Hoopstad, took on “Take Me Home” from Jess Glynne. LIRA called it a stellar performance and said it was like a whole other Carmen, but still Carmen got relegated to the Danger Zone, with no rescue from any of the other coaches.

Next up was the PJ Twins (26) from Bonteheuwel in the Cape, and they decided to show off their operatic skills with the Mario Frangoulis hit “Caruso”. LIRA wasn’t pleased with the twins’ work during rehearsals, but their performance on the night left the coaches tongue tied. “I think you guys really nailed that classical opera performance tonight and your stage presence was also there to match,” said Francois. “You guys are perfectly in synch; it’s almost like you’re twins or something,” he joked. LIRA said they had great potential, and gave them a direct passage to  the Safe Zone.

Thereafter Petro De Villiers (36) from Cape Town took to the stage with “Titanium”, the David Guetta hit featuring Sia, which she said holds a lot of meaning for her. Her performance had her fellow #TeamLIRA artists in tears and Riana Nel said she looked like an absolute star. “I can’t believe you drive cement trucks,” she laughed. LIRA said she was in turmoil over her decision, but she eventually opted to send Petro to the Danger Zone.

The first 4-chair-turn talent of the season, Durban musician Ross Charles (26), chose the Maroon 5 classic “Sunday Morning” in an effort to impress his coach. “I also put in a sneaky little swing section,” he said, but LIRA thought it came across inauthentic. But his performance on stage had the audience and the coaches bopping, and LIRA was happy that Ross had let his personality shine through. She parked him in the Danger Zone “for now”, and he was immediately stolen by Riky Rick! “You need to protect this man,” he lectured his colleague. “Ross’s journey continues in great hands,” LIRA conceded graciously.

Rayleen Padayachee (27), originally from Pietermaritzburg, sang the Destiny’s Child hit “Survivor”, “for an ex-boyfriend”, she laughed. “Pretend he’s right there,” LIRA advised her in rehearsals and her performance in the show had LIRA and Riana on their feet. “That was powerful and kickass!” said Francois van Coke, who was one of the coaches who had turned for Rayleen in the Blind Auditions. LIRA commended her artist for the hard work she had put into that performance. “Such an amazing singer,” LIRA mused, but she opted to hold Rayleen in the Danger Zone until the end of the evening.

LIRA’s next performer, 34-year-old Sbu Dludlu from Duduza, pleased her by choosing Stevie Wonder’s “Signed, Sealed, Delivered” for his performance. “You know Stevie’s the reason why I’m a songwriter,” she shared. Sbu’s performance had the studio audience dancing in the aisles and Francois noted naughtily that if he kept singing like that, he wouldn’t be single for much longer! LIRA thought Sbu “did exceptionally well”, but he had to make his way to the Danger Zone nevertheless.

Corneil Muller (32) from Bloemfontein, the artist that had LIRA breaking all of the rules when she turned for him in the Blind Auditions even after her team was full, picked a song called “Regrese Ami”, Il Divo’s Spanish version of “Unbreak My Heart” by Toni Braxton, to showcase his powerful voice. Riana said he reminded her of Pavarotti, which left LIRA with a terrible decision to make. She put Corneil in the Danger Zone, “for now”, she said, but Riana saw her chance and triumphantly stole Corneil for #TeamRiana!

Lora Joplin (29) from Port Elizabeth was next with Rihanna’s “Man Down” and after LIRA helped her with her “attitude”, she even had Riky Rick dancing in his chair. But because there were only two acts left to perform, The Voice SA host Anele Mdoda informed LIRA that she didn’t have to make her call right away. “You only comment and make a decision on the final chair in the Safe Zone after all three have sung,” she told LIRA.

So LIRA moved right along to her next act, 18-year-old Yahto Kraft from Alberton, who chose Alanis Morissette’s “Uninvited”, and then, without comment, to her final act, 29-year-old music tutor Slindo Zondo (29) from Durban, who combined rock and opera with Queen’s “The Show Must Go On”.

And then it was time for LIRA to allocate the final spot in her Safe Zone. She opted for 18-year-old Yahto Kraft. Thereafter she could reclaim three of her artists in the Danger Zone to complete her team of six for the Battle Rounds. She saved  Slindo Zondo, Petro De Villiers and Sbu Dludlu.

Video
Tevin returns – Survivor SA
Returning from Survivor SA: Philippines S6 as a pre-merger, Tevin is determined to cement his place in the Survivor history books as one of the best the game has ever seen.
Video
Burning questions: part 1 – Survivor SA
Nico answers your burning questions on Twitter.
News
The Voice's expert coaches
How much do you really know about the coaches on The Voice?
Gallery
Tomato time – MasterChef SA
Check out photos from the eleventh episode of MasterChef SA season 4.Images: Charlie Sperring