News
26 October 2021
The spooky season is upon us. And this is how you can save your own life.
Subscribe To Watch

Halloween, the last day of October, is steadily gaining traction in South Africa. You know, the parties, décor, costumes, fake spider webs, and scary looking snacks. 🎃 It is a thing now.

Outside of parties, there is always an option of having a horror movie marathon, if you’re not a sensitive viewer of course. And what if people do ever find themselves in a horror movie scenario? Who would make out alive? Who would succumb first? Who would the villain be?

What we do know, though, is what not to do in such a setting, courtesy of endless films that keep everyone on the edge of their seats, biting their nails, hiding under the duvet, or shrieking out loud. There are those few who will simply LOL. Perhaps they have tougher skins than others.

1. Do not use an Ouija board. Under no circumstance. Do not tinker, look, dust, or move it. Just nothing. Why? You’ll never know what malevolent spirit you will invite into your life.

2. There is always that one alleged haunted house 👻 in any neighbourhood, even an area or vicinity or ­– blimey – a graveyard. Here’s a tip: never ever venture into those places.

Watch Amityville: The Awakening on DStv

3. So maybe you and your friends did venture into that one notorious spots, for the love of all things good, stay in the group. Strike two is venturing off alone. Do you know where that would get you? Maimed, possessed, or even killed. Stay. In. A. Group.

4. If you love the sun and basking in its glory, then do not venture into any dark woods or alleys. That’s because you will probably never see the sun again.

Watch Witches in the Woods on DStv

5. Throw out strange dolls from your house or anything that gives you bad vibes. 🎎 You know the one, the one who’s eyes follows your every movement. From Chucky to Annabelle, learn these lessons people.

6. Sure, clowns are fun at a kids party. The jokes, big goofy shoes, and colourful clothes. 🔫 Yet if Stephen King’s It thought us anything, clowns can have a dark side. Ensure you always keep them happy and joyful to avoid their killer side.

Stream IT: Chapter 2 on Showmax 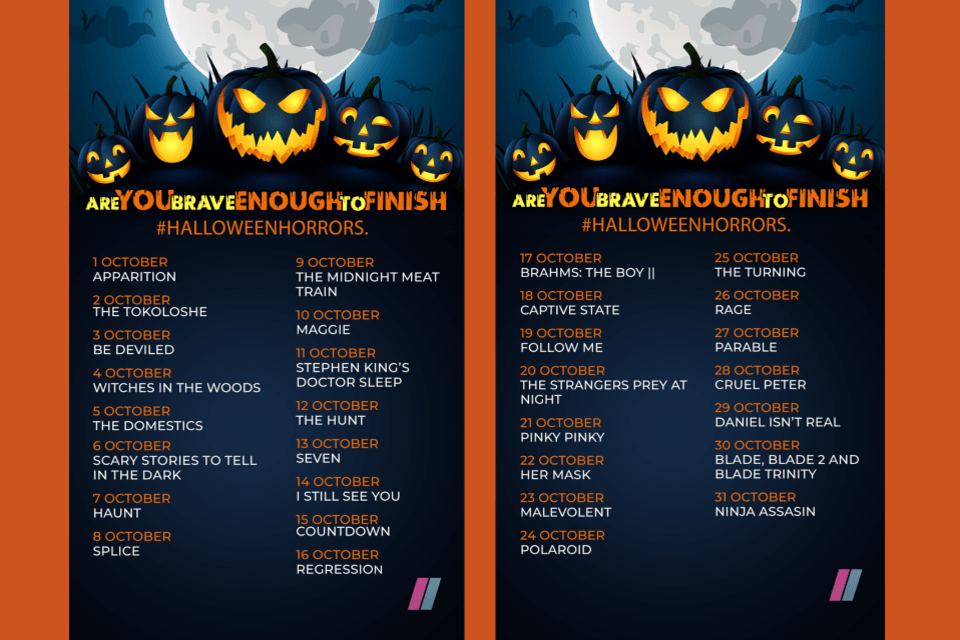 7. If the villain is unconscious/dead, don't go and see if they are still alive. Do not go near the body at all. Rather take the opposite direction. Please!

Watch the modern classic I Know What You Did Last Summer on M-Net Movies 4 at 21:55 on 30 October

8. When you’re home alone and hear a creepy sound, do not venture toward it. Rather stay put, stay safe, and investigate it in the morning. In all likelihood, it might have been Fluffy the cat; or Buddy the dog doing what they shouldn’t. But at night, it might just be something more sinister.

Video
Fight to survive
𝗧𝗵𝗶𝘀 𝘀𝘁𝗼𝗿𝘆 𝗼𝗿𝗶𝗴𝗶𝗻𝗮𝗹𝗹𝘆 𝗮𝗶𝗿𝗲𝗱 𝗼𝗻 𝟭𝟬 𝗝𝘂𝗹𝘆 𝟮𝟬𝟮𝟮. Treatment for rare diseases can be staggeringly expensive. But when medical aid schemes refuse to pay, families are in for the fight of their lives. Carte Blanche explores the bitter conundrum families are confronted with as they try to access life-saving medicines for a group of rare genetic conditions called lysosomal storage disorders. A single month’s supply can cost hundreds of thousands of rands. The good news for patients is that these diseases are Prescribed Minimum Benefit conditions, which means that according to the Medical Schemes Act, medical aid schemes are obligated to cover treatment. And yet in case after case, medical aids refuse, dragging patients and their families through lengthy hearings with the Council for Medical Schemes. To date, the process has always resulted in a decision in the patient's favour. But at what cost to the patients while they’re forced to wait?
Video
Surviving a desert island – MasterChef SA
Would MasterChef SA judges Zola Nene, Gregory Czarnecki, and Justine Drake survive on a desert island? From which tools they’d bring to who they’d bring with them, watch and learn.
Video
Shocktober - M-Net Movies
Celebrate the month of Halloween with a spooky line-up of horror movies, including local horror movie Pinky Pinky on 31 October.
News
What to Watch this October – M-Net Movies
Our movie musts this October.