News
04 May 2018
Lalla meets and greets the stars of Rampage.
Subscribe To Watch

When you’re asked to travel abroad to sit down with The Rock about his brand-new production, a rush of emotions run through you. But first off: which movie?

At the time of writing, The Rock had twelve films listed on IMDb as either announced or in pre- or post-production. Dubbed the biggest star in Hollywood, there is a reason this man has garnered so much love and respect the world over.

His acting career can be traced back to 1999 during the height of his wrestling stardom, with appearances in That '70s Show, The Net, and Saturday Night Live on the small screen. In 2001 we saw Dwayne make his feature film debut, as the Scorpion King, in The Mummy Returns.

He has been quoted saying that The Scorpion King  (his first lead performance) came about after filmmakers saw how much talent he had, based on his performance in The Mummy Returns .

Using that as a foundation, The Rock has been taking consistent steps towards building his brand in Hollywood. Taking on movie roles in films such as The Game Plan, Get Smart, and The Other Guys is testament to the fact that he didn’t become a worldwide sensation overnight. He refers to himself as the “hardest worker in the room”, and it’s sure paying off.

I Googled how many movies The Rock has starred in; this is what came up: 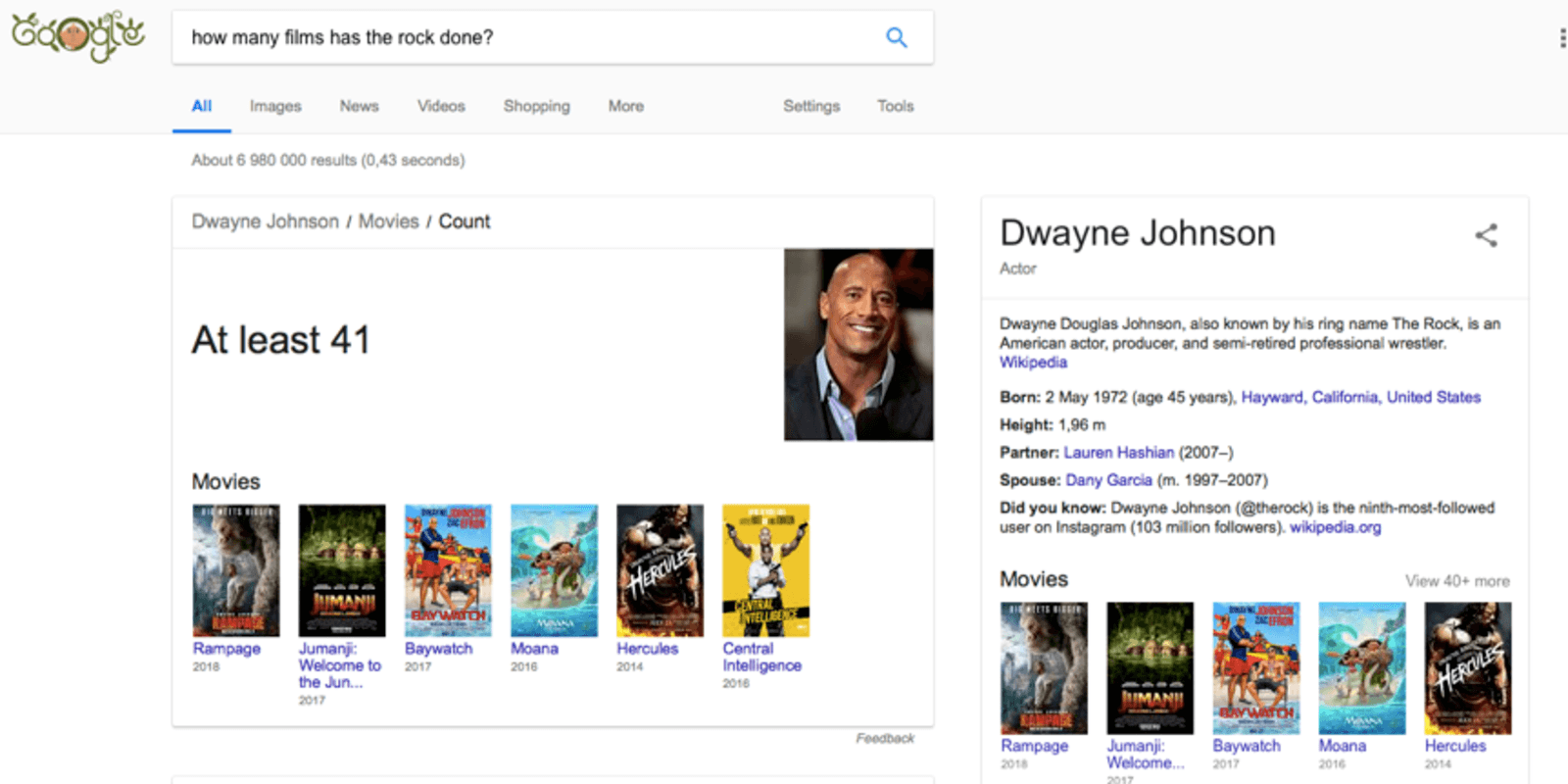 At least 41? Google doesn’t even know the real answer to the question. Big blockbuster hits or not, that’s quite a high, albeit vague, number. His latest, Rampage, shakes things up in the monster movie universe, and who better to lead the way than Dwayne.

Flying into London for the European premiere I had time to think about this man’s career and how he has been able to flip his life 180 degrees: a true success story that resonates with people from all walks of life.

After arriving in London, I had two days to appreciate the English springtime; which in South Africa, we’d call “just plain old winter”. Some things have changed since our last visit to the land of the queen.

London has seemed to come to grips with Brexit; I say this as I didn’t experience as many cab drivers complaining about it. The Piccadilly lights have also been upgraded to the curve; which is now seamless, better quality, and brighter…maybe to help with the sun deprivation they’re experiencing. Also: our exchange rate makes it “easier” to buy a quarter chicken meal at Nandos at R127.32 instead of almost R150. Progress. 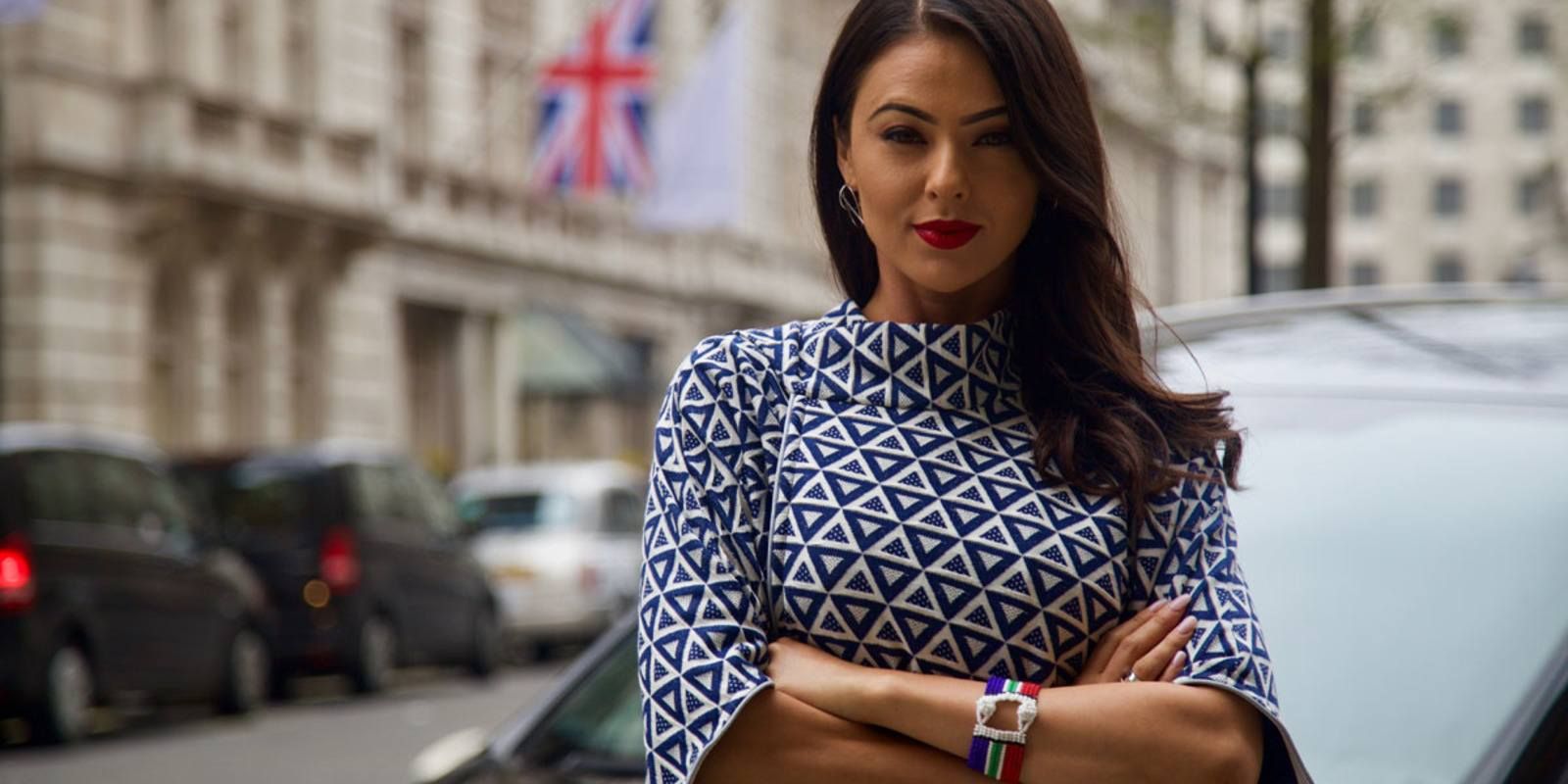 I am extremely grateful for the opportunity to travel with LallaLand.  No matter how many times we go to a city I’m in total wonder of the people, the food, the culture, and fellow tourists that come from all over the world. People from Kyrgyzstan, Brunei, Kiribati, Djibouti, and Malta, to name a few. It’s an experience all on its own just to meet people there.

They all seem to be fascinated with South Africa. It’s an awesome pulling card. Being from this country is, in itself, very powerful in the casual conversation of “so where are you from”?

London has a thriving tourism industry and there are endless things to do in The Big Smoke. For the first time, this ninja went up the London Eye, which was an incredible experience. I struggled with vertigo most of the way, but the view is beyond anything I imagined. 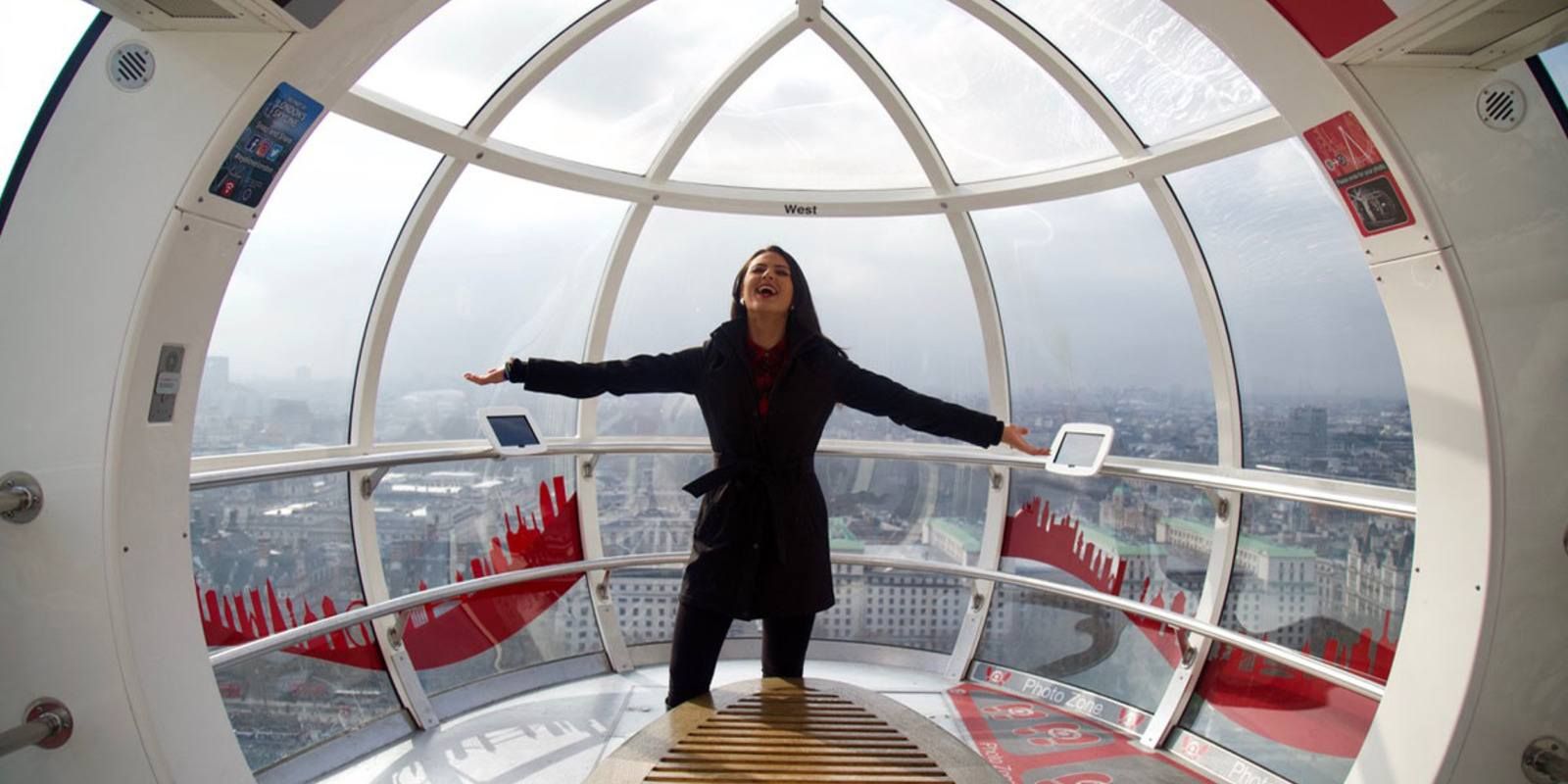 Another awesome moment was taking a tourist cruise out on the River Thames. If you’re ever in London, I recommend you try it. I learned more about the city and its people in those 45 minutes than I ever did in years of high school history.

Oh! I also got wind of the Rampage app for smartphones and thought London was a pretty cool backdrop to play around with it. Check out Episode 3 here to see what it’s all about.

Fast-forward a few days and I’m keeping down the blood pudding from breakfast, mastering public transport, and successfully convincing myself not to give in to a shopping spree.

I got ready for the press viewing at Warner Brothers' UK headquarters. A favourite while on the job is interacting with fellow journalists from around the globe. This is usually our first meeting point on an assignment. As I’ve written before, people are starting to recognise M-Net Movies overseas and that’s a great feeling. 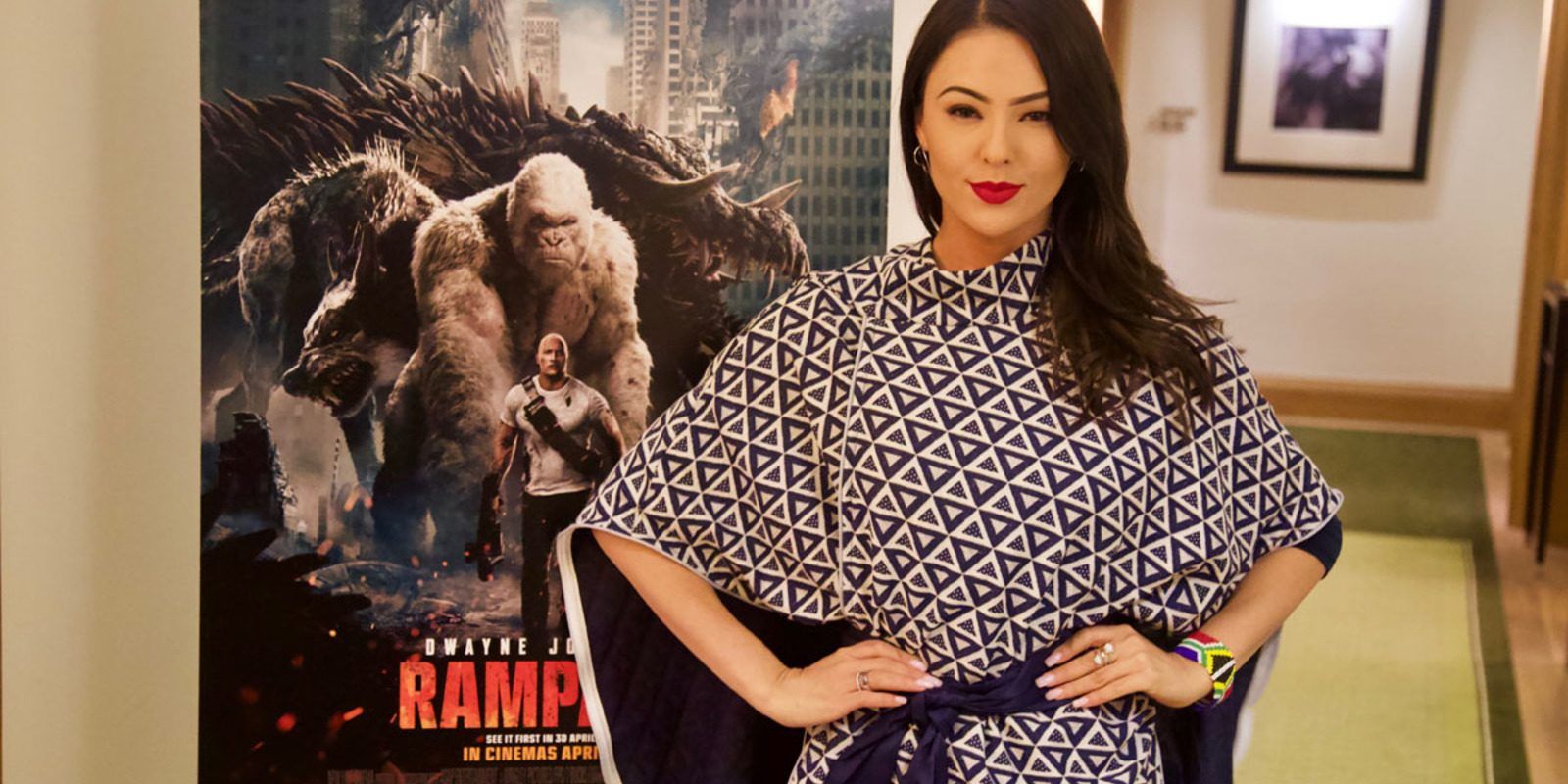 After catching up with a few familiar faces in the lobby, we were called up and whisked away to the private WB cinema to watch Rampage.

It’s big, crazy, smashing fun and we all ran back to our hotels to start prepping our first encounter with the cast of the movie on the red carpet the next day.

Premieres often see the main cast missing one or two members, but this time around we had everyone walk down that red-carpeted piece of real estate in Leicester Square: Naomi Harris, Jeffery Dean Morgan, Malin Åkerman, as well as The Rock. 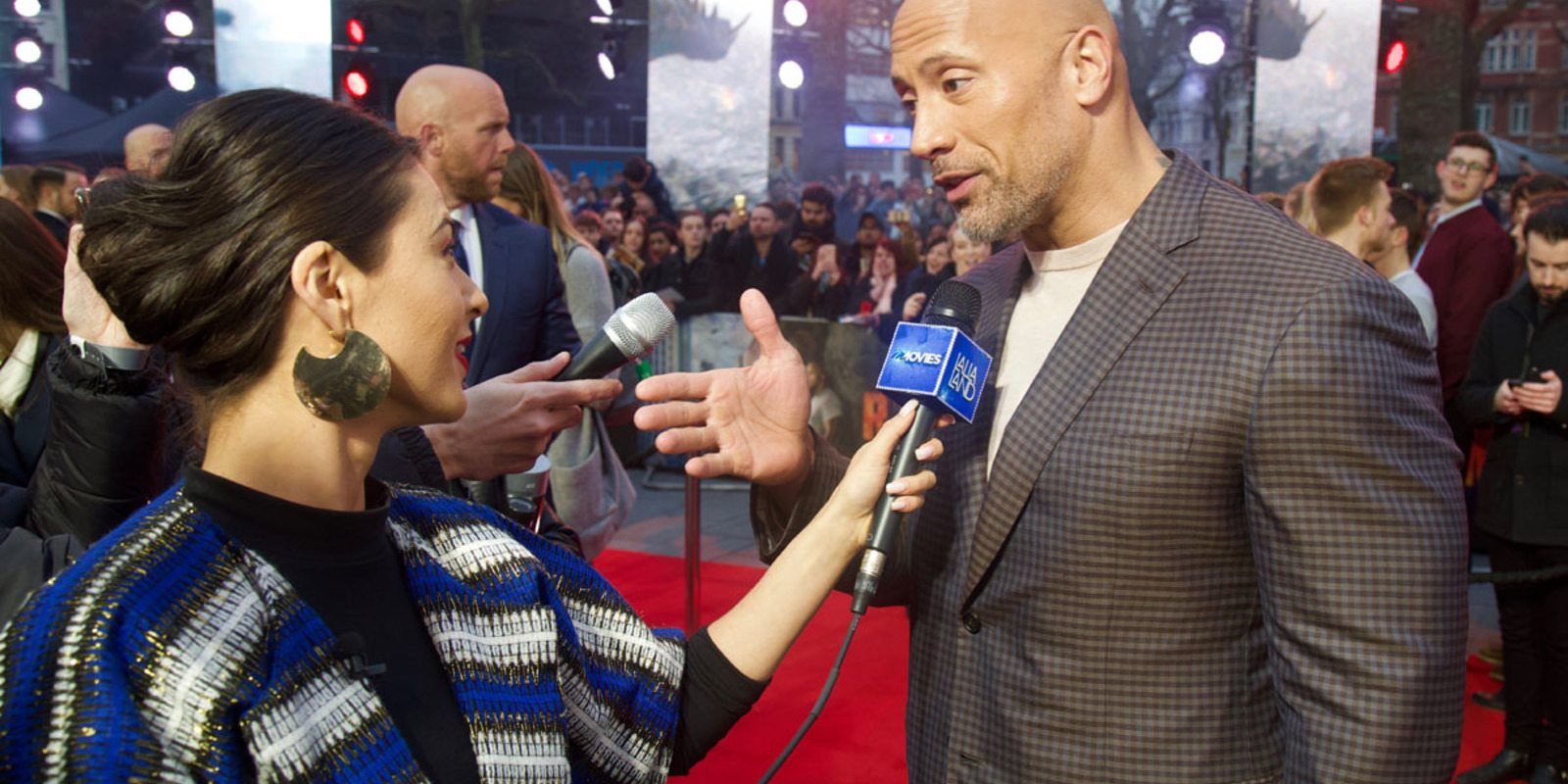 The amount of spectators at the event was impressive; the square was abuzz and Warner Brothers pulled out all the stops. A DJ, MC, lights, screens, and a truck full of security; some people had been camping in the square since 03:00 AM just to secure their spot in front to see The Rock up close.

M-Net Movies was allocated a fantastic spot on the carpet, and we set up to make sure we got good shots and were able to catch the stars as they came down. As each of their cars arrived at the top of the carpet, there’d be a brief moment of silence. As fans waited with bated breath thinking, "Who’s stepping out?" 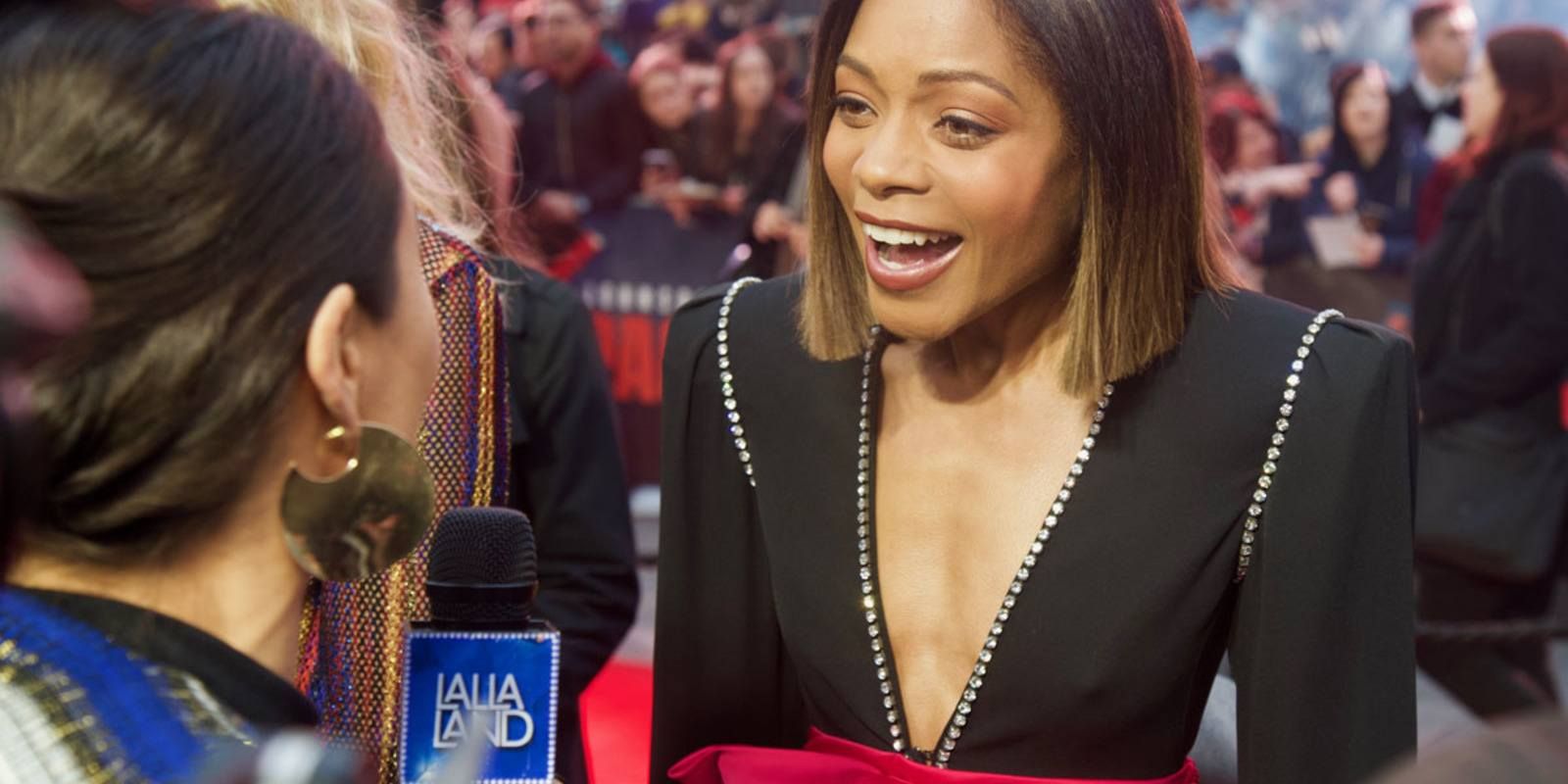 The first star to walk down was Naomi Harris, then one of the producers, Beau Flynn, and director Brad Peyton. Next the beautiful Malin Åkerman and then the charming Jeffrey Dean Morgan. As you’d expect, the crowd cheered loudly as they spotted their favourites. 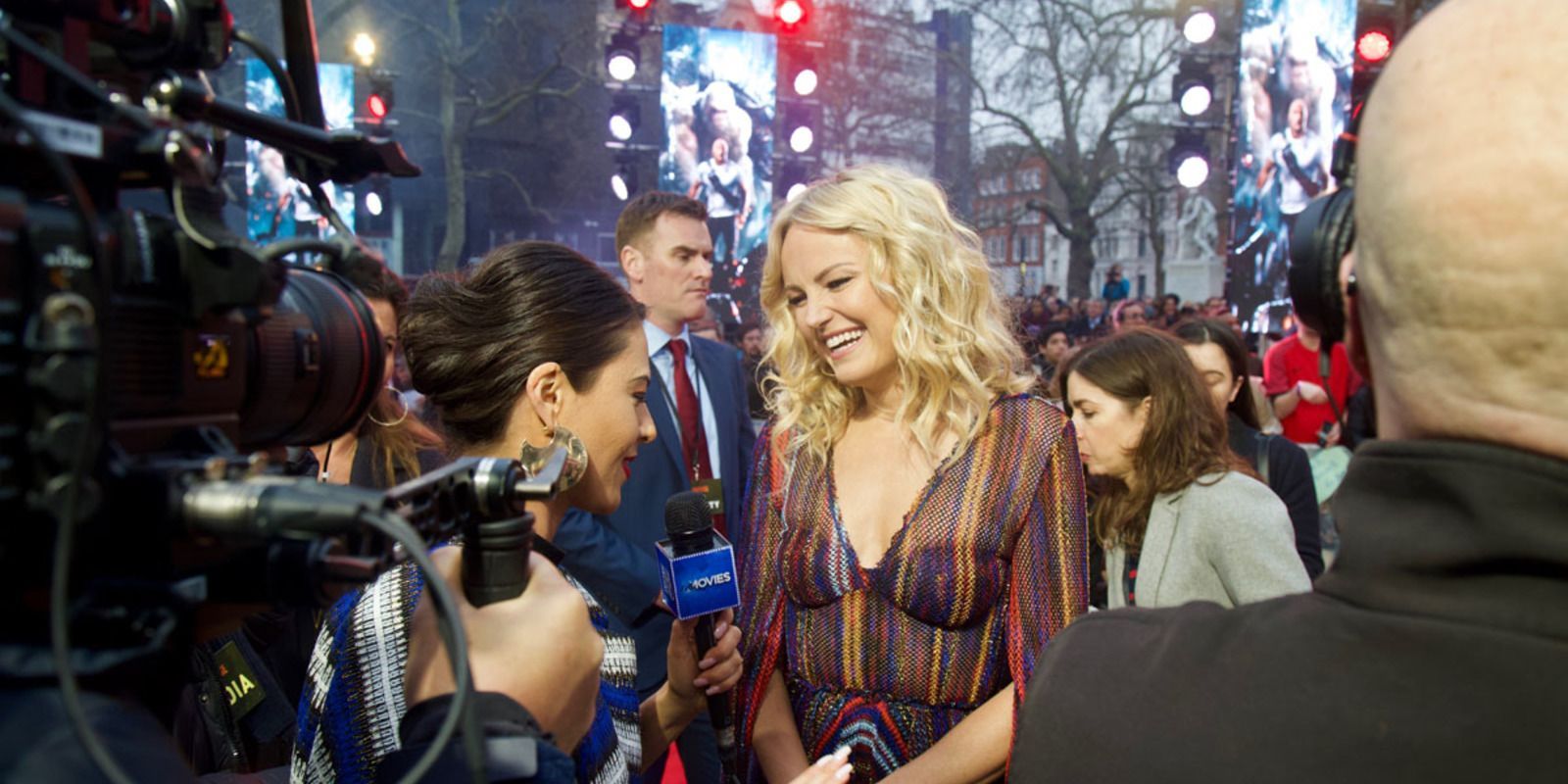 Finally, the last vehicle pulled up and without hesitation everyone in a radius of 300m knew exactly who was in that car. The noise was almost deafening. Security intensified and the MC and DJ didn’t need to do much to hype the crowd at all. As the door opened Hollywood’s biggest star stepped out to greet his fans and address the media line.

As glamorous as the job looks, I do not envy these incredibly hard-working stars. To chat with endless media outlets over a period of 45 minutes to an hour is impressive. Add the dedicated, sometimes crazed fans they interact with, and it’s a tug-of-war out there and they are the rope.

We secured interviews with all the stars. We’re given time limits with each so it’s important to get in as many questions as we can. It’s a little anxiety-inducing, but also exciting.

Seeing how passionate these artists are about the project they’re celebrating is an awesome experience. Dwayne is as humble as they come and even though he is highly in demand, he treats each interaction as if it’s the most important one.

I’m sure it’s a reason behind his incredible success and likability. His fellow cast members all acknowledged how important his presence was and referred to him constantly in our interviews.

After all the stars and special guests had been ushered into the theatre, the strike-crew was ready to break down the red carpet set-up and return the square to normal almost immediately. It’s really a bizarre thing to witness. As the crowd disperses, the energy changes right in front of you. As we left the area, all of us were still hyped up. Whoa! What a rush! 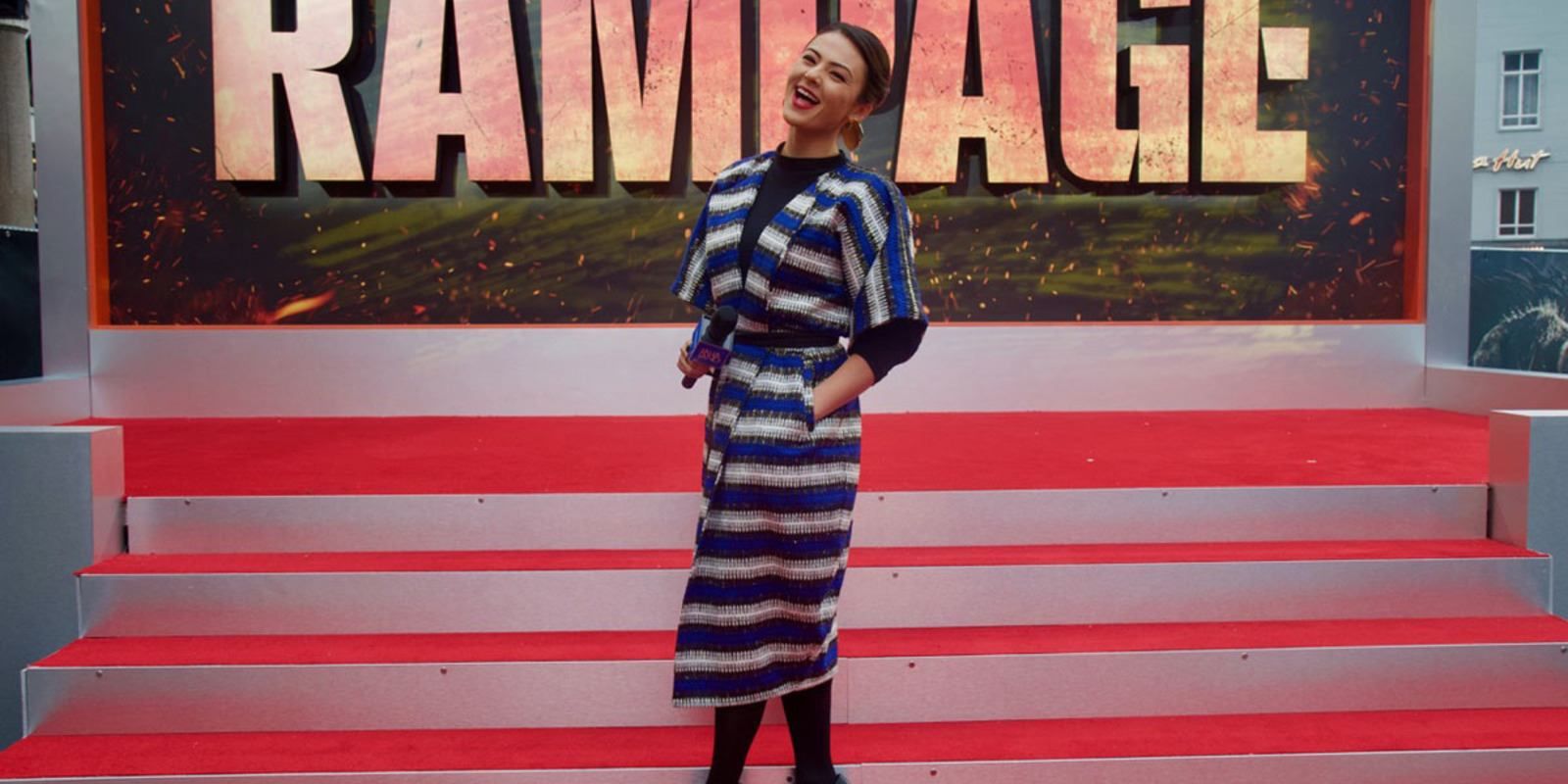 Time to get back to the hotel and prep for the next day: Junket Day.

We were assigned the afternoon slot for junket day. By that time the stars have faced countless journalists, asking questions that all follow the same premise. Can you imagine how exhausting that must be? How do they do it?

It’s a tough task, but each person I sat down with was excited to chat to South Africa and engage with us. Malin Åkerman even said she’s excited to visit Mzansi for her upcoming honeymoon! So let us know if you spot her soon.

Between you and me: on my list of favourite interviews ever, is now with Jeffrey D. Morgan. He’s the swaggiest man I’ve ever spoken to. I wasn’t expecting him to be that cool: what a great surprise! 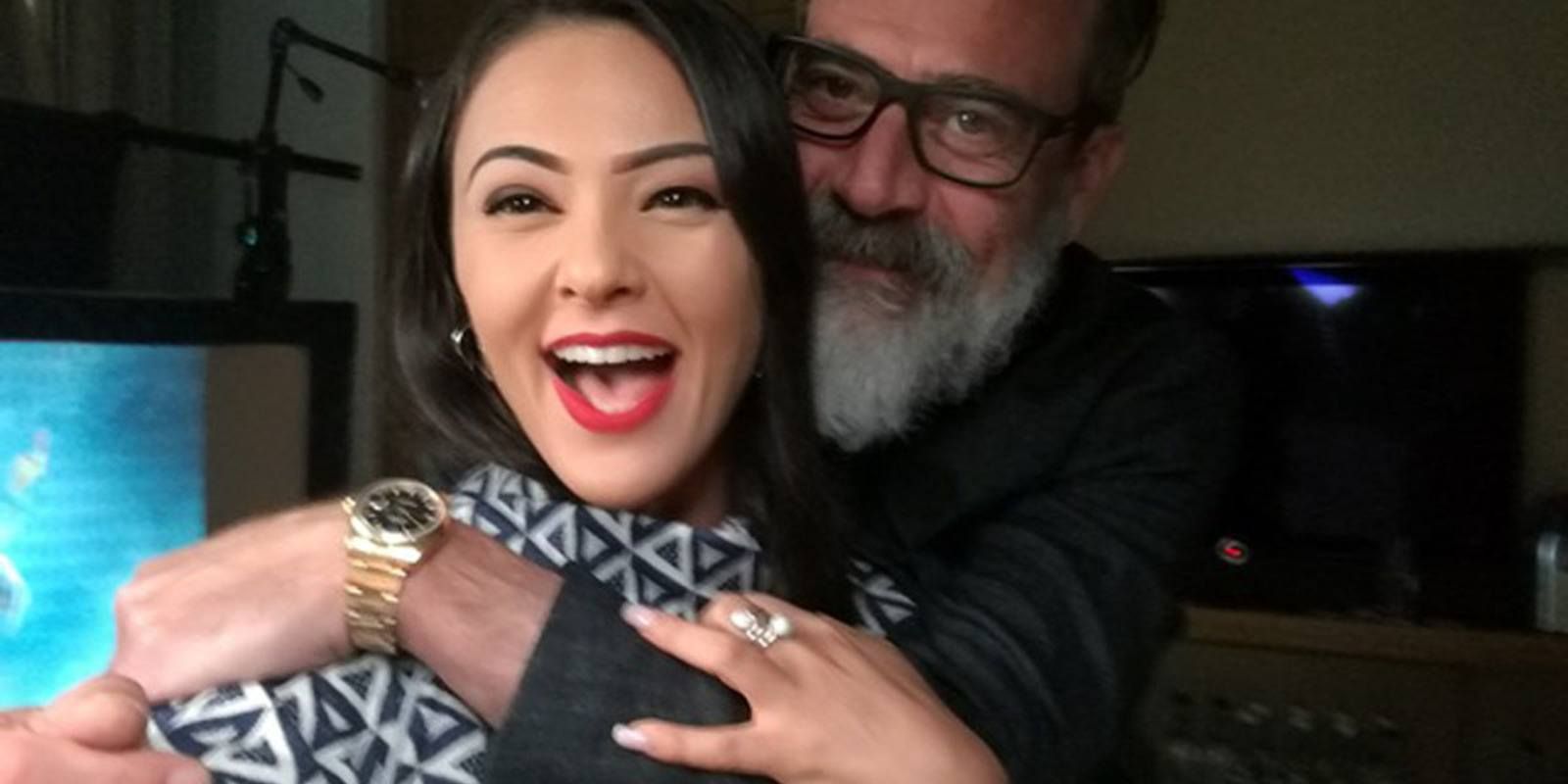 My final sit down was with Dwayne. He was running behind schedule, probably due to journalists trying to squeeze in “one-more-question”. By the time we were up for our slot, our time had been cut to three minutes. That’s not even enough time to introduce yourself!

Luckily, he remembered us from the night before on the red carpet. In 180 seconds I managed to get in most of my important questions as well as secure a marriage proposal (watch it here). Yip! I’m currently awaiting details from my newly acquired fiancé on the details of our wedding. I’ll share as soon as I know more.

His humility and willingness to engage without an ounce of arrogance is quite contrary to his successful WWE persona. He doesn’t shy away from hard work, and over the years he has metamorphosed into a formidable cinematic force.

Another incredible assignment on LallaLand! I am left grateful for every minute of it. As I boarded the plane back to Johannesburg I thought: if a down-and-out football player with only seven bucks and a dream can become one of the wealthiest and most successful people in showbiz, anyone can. 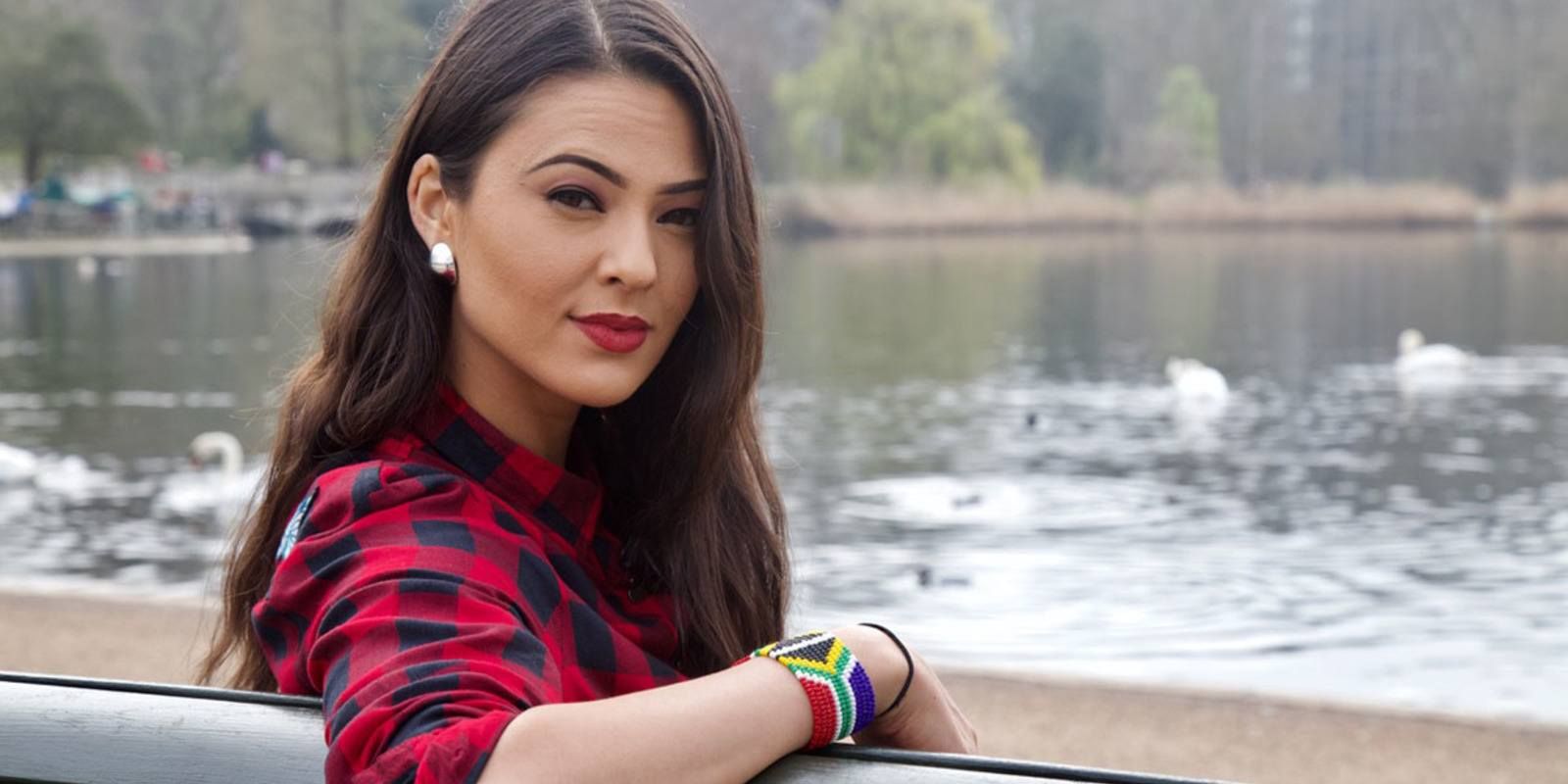 A big, fun monster movie starring Dwayne “The Rock" Johnson, who really brings this movie to life alongside his buddy George, the mutated albino gorilla; finally: a co-host bigger than him.

It has it all for a two-hour popcorn-munching journey of high action badassery: pure entertainment that doesn’t take itself too seriously.

Based on the '80s arcade game of the same name, the creators did a great job turning what was a rather simple smash-‘em-up bit of button-pushing fun, into action and adventure, drama, science fiction and fantasy.

An awesome movie night out for a little escapism.