News
20 January 2017
Here’s what our high profile #TheVoiceSA team leaders have been up to since last season.
Subscribe To Watch

Proving that they’re in The Voice SA’s red hot seats for good reasons, our coach quartet have been super busy since Richard Stirton won the inaugural title in May of 2016.

Miss Lira has been very prominent in the news of late. On Sunday night (15 January) she was the host of M-Net & Friends, performing alongside guests including #TeamLira’s Jeremy Olivier – who she recently collaborated with on the well-received single “Love Back” – Blaque Harmony, Prime Circle’s Ross Learmonth, her season 1 co-coach Nianell and Grammy-winning flautist Wouter Kellerman. Kahn and Bobby have also both hosted their own M-Net & Friends specials.

We go backstage as @Miss_LIRA and her guests prepare for tonights episode of M-Net & Friends. #MNFriends #MNet101 pic.twitter.com/EvwcYVxqi8

We went behind the scenes on the show – watch here.

Im thrilled to announce that I recorded the soundtrack and end credit song titled "How Far I'll go" for DISNEY's... https://t.co/eHTfIEt54n

She also recorded a video for the sweeping song.

Not to be outdone, Karen Zoid returned to kykNET screens with the fourth season of her award-winning talk show Republiek van Zoid Afrika. As always the show ended with a tune done in tandem with her guests, which included The Voice SA’s Lira, Thembeka Mnguni and Almur Marais; and Lianie May, Riana Nel, Leon Schuster, Joe Foster, Gereformeede Blues Band, Coenie de Villiers and many more. As with previous seasons, these tracks were released on iTunes after the episode, and many went straight to the top of the standings, leading Channel 24 to dub her “the queen of the iTunes charts”.

Coach Bobby van Jaarsveld has also been busy with small screen endeavours. Alongside his also-famous singer sister Karlien, he is starring in a reality show titled In Jou Skoene (In Your Shoes). The show premiered last Wednesday (11 January) and the concept is that the two spend 48 hours in the shoes of someone whose world is completely different from theirs – and then make a difference to those lives.

To commemorate the airing of the show, the siblings have appeared on the cover of the latest issue of Huisgenoot and stopped in at Jacaranda FM to play a revealing game of “never have I ever”. 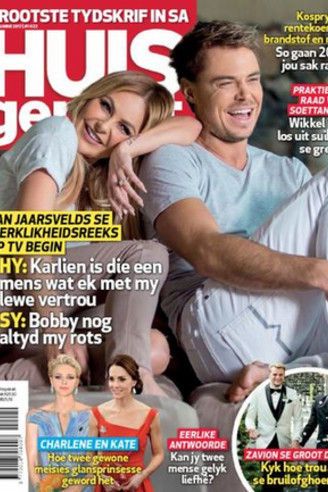 Kahn Morbee, who’ll be hoping he can duplicate his win from season 1 this year, also recently teamed up with Jacaranda FM for their Carols By Candlelight concert – alongside Swing City and Lloyd Cele – and even grabbed a ukulele to perform a unique version of “Jingle Bells”!

Additionally he brought us into the New Year with his M-Net & Friends concert, and his band The Parlotones toured Europe, and despite having some equipment (and passports) stolen in Germany, by all accounts it was a tremendous triumph.

We caught up with our coaches on set for a more personal catch-up.

So all of our coaches have been keeping busy with great ventures – now they return to The Voice SA set for another season of spellbinding singing. Tune in from Sunday 29 January at 17:30!

Video
On Catch Up: Paramedic panic
Imagine emergency service workers having to open ambulance windows to get oxygen to their patients! Unfortunately, for a number of Eastern Cape paramedics, this is an all too real problem. Watch the full story now on DStv Catch Up.
Video
[FROM THE ARCHIVES] Diesel skimming
𝗧𝗵𝗶𝘀 𝘀𝘁𝗼𝗿𝘆 𝗼𝗿𝗶𝗴𝗶𝗻𝗮𝗹𝗹𝘆 𝗮𝗶𝗿𝗲𝗱 𝗼𝗻 𝟮𝟮 𝗦𝗲𝗽𝘁𝗲𝗺𝗯𝗲𝗿 𝟮𝟬𝟭𝟵. Have you heard of diesel skimming? It’s a little-known, illegal operation where hundreds of truck drivers make unscheduled pit stops to allow criminals to siphon off several litres of fuel from their trucks in exchange for hard cash. The transaction is quick. The money is easy. And it’s unsuspecting consumers who could be forking out extra in transport fees. Carte Blanche goes undercover to expose one major syndicate on Johannesburg’s East Rand. -- Visit the Carte Blanche official site: https://mnet.dstv.com/show/carte-blanche Find us on Catch Up: https://bit.ly/32VvbU5 Stream the show live on DStv Now: https://bit.ly/3l92LhH Watch more series and movies on Showmax, start your 14-day free trial here: https://bit.ly/36PFSr0 Get DStv: https://bit.ly/3edx58V Like Carte Blanche on Facebook: https://www.facebook.com/carteblanchetv/ Follow Carte Blanche on Twitter: https://twitter.com/carteblanchetv/ Be a fan on Instagram: https://www.instagram.com/carteblanchetv/ #carteblanche #petrolprice #fuelpricehike #fuelprice #expensive #investigation #crime
Video
Catch Super Intelligence
When an all-powerful Superintelligence chooses to study average Carol Peters, the fate of the world hangs in the balance. As the A.I. decides to enslave, save or destroy humanity, it's up to Carol to prove that people are worth saving.
Video
Petra and Stefan catch up – Legacy
"Two whole Potgieters is too much excitement for me for one day," says Sanele as he leaves the Potgieter siblings to bond, but not without warning Stefan to stop putting Petra in danger.