News
05 December 2010
South Africa would be a lot poorer were it not for selfless individuals who give of their time and energy to help those in need. Dawn Leppan is one such person. She and her Thousand Hills community helpers feed hundreds of indigent people every day. Now her inspirational work has been given a boost by the Carte Blanche Making a Difference campaign.
Subscribe To Watch

Its 5 o'clock in the morning, in the Valley of a Thousand Hills in KZN, and Dawn Leppan is on her way to work.

Dawn Leppan (Founder): 'Oh, it is a joy for me. You have bad days and good days and very bad days... but you have your happy times too.'

Dawn's good and bad times are spent here at the 1000 Hills Community Helpers, an NGO she founded in the late-eighties. Around here, she's affectionately known as 'auntie'.

As people from the area stream into the centre, volunteers prepare porridge so that those arriving can begin the day with something in their tummies.

Bongani Bingwa (Carte Blanche presenter):"Running this kitchen is something like a military operation. Nearly a thousand meals are prepared here every day, both breakfast and lunch. And for those who are fed here it is literally the difference between life and death.'

Children: 'Thank you for the food we eat!'

Things had hardly got going when a request came for an ambulance for a sickly community member. This is 1000 Hills Community Helper's private ambulance and it serves a population of about 26 000 people.

Philip Shozi (Paramedic): 'So we are just taking the patient back to the centre - the centre is our clinic - to check what is wrong with that patient.'

Without the ambulance, the sick would simply not have access to medical care. They can't afford to pay for transport to get to a clinic.

Bongani: 'If you weren't here, how much support is there for this community?'

Dawn's grandparents owned a restaurant in the Valley of a Thousand Hills and this has always been home. She's fluent in Zulu and has always had a close relationship with the community.

Dawn: 'My gran was very involved with the community. Anybody in the community who had a problem, they always used to come to gran. So one just grew up that this was your extended family and that was what you did.'

In 1987, KwaZulu-Natal was affected by one of the worst floods in recorded history. Hundreds died and thousands of homes were swept away. Dawn's charity was born from this tragedy with the help of a famous author who frequented their restaurant.

Dawn: 'Alan Paton used to come every Sunday afternoon for crumpets and honey. There was so much warmth in his heart [so] I said, 'How can we help the community?' And he said, 'Well, let's start up a feeding scheme.' And that is what I did.'

Although she started modestly, feeding people from the back of her bakkie, it soon became clear that this was not enough.

The needs of the community were huge and over the years she gradually realised her dream.

First it was a feeding scheme, then a clinic, community support groups, a crèche for over 100 children, a computer training facility and the only library for miles.

There is something bittersweet about the Valley of a Thousand Hills. Alan Paton spoke of the lovely road into the hills and one of the fairest valleys in Africa. But the needs here are immense. When Dawn first started her feeding scheme, the HIV/Aids pandemic was in its infancy. Now it's over-whelming.

Bongani: 'What is the impact of HIV/Aids been here?'

Dawn: 'Infected, unfortunately I don't have those stats.'

Bongani: 'As high as that?'

Thabisile: 'Including adults, and children, and newborn - 60%.'

Sister Dlamini heads up the clinic and sees up to 150 patients a day. And most of their ailments are HIV/Aids related.

Bongani: 'Are we winning the war against HIV?'

Thabisile: 'No, we are failing. We are fighting a losing battle.'

Dawn hears about deaths in the community at least three times a week. On her way home, she was called by two young boys, unable to wake their mother.

Dawn: 'When I arrived at the house I could see that she had passed on and I checked for a pulse. And I sat on the bed with her; I didn't want to alarm the children. Granny came over and checked and saw that she was gone. And that was just part of another day.'

Bongani: 'This is really what this clinic and this community is all about. These two young kids have been brought back here because their mother died last night. So, they were removed from the situation last night, taken to the clinic and now that everything has calmed down again, been brought back to their goggo who must fend for them from now on.'

Dawn: 'You have to be strong for the family. But that doesn't mean to say that when you walk away it doesn't affect you. It does.'

But when Dawn sees the joyful faces of the children in the crèche it makes up for the sadness she feels.

Bongani: 'What keep you going? What gives you that extra push?'

Dawn: 'To see the impact of the help that we do give has on the people. We are touching lives, we are helping people.'

Dawn's charity has also trained home-based carers who travel around helping those affected by HIV/Aids. We went with them on a house visit and were shocked by what we saw.

An ordinary house call turned into a medical crisis. Dawn and her helpers found a young man whom they thought might have meningitis. 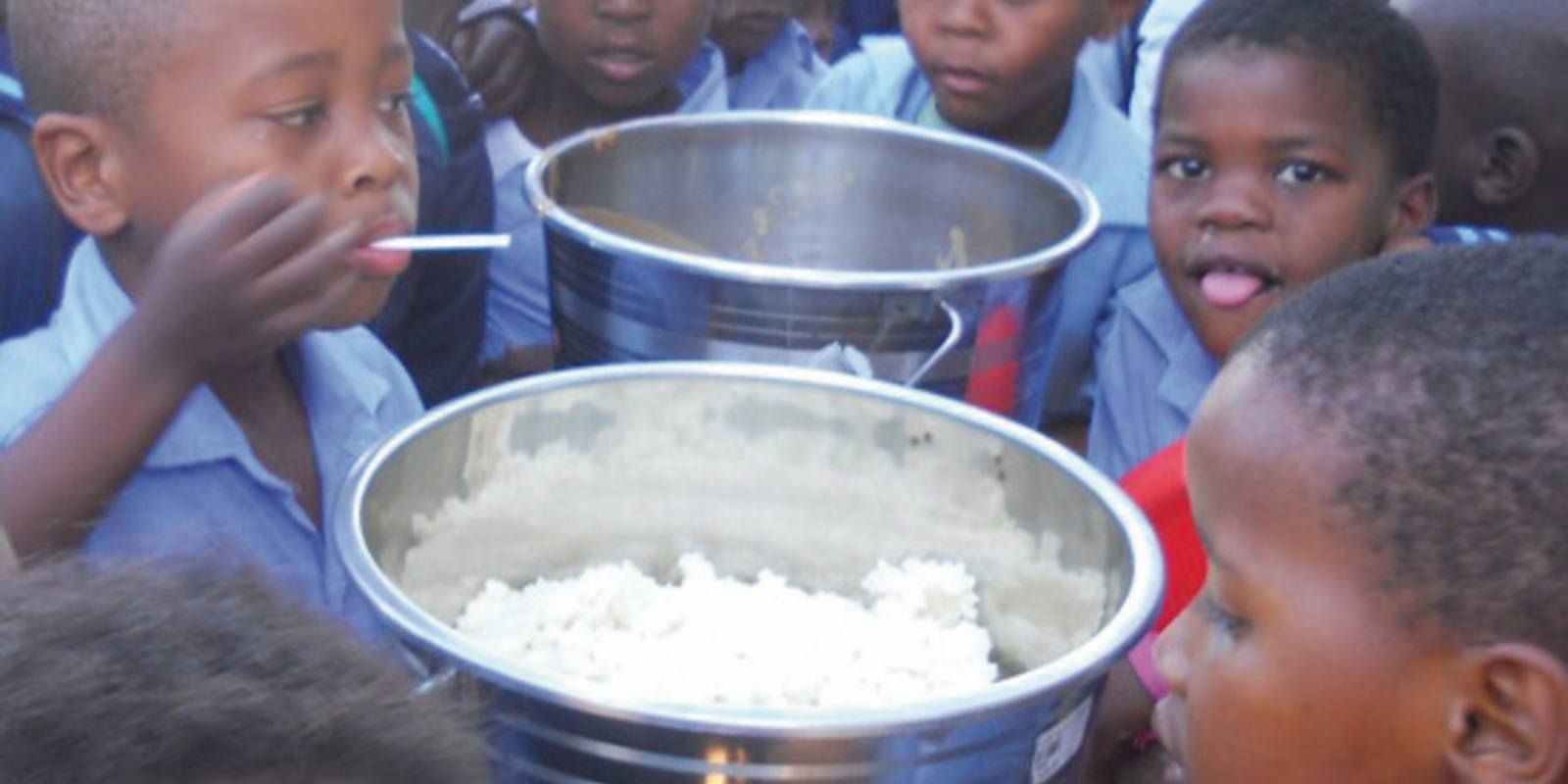 The 25-year-old man had been caring for seven children in a household, none of whom had eaten that day. Themkosi is only 11 years old and traumatised by his uncle's condition.

Dawn: 'He feels terrible; really sad in his heart... His mother has passed away; he does not know his father.'

Sister Dlamini was called to take the feverish and emaciated man to hospital. What really upset her was that he had been discharged from hospital in this condition only the day before.

Bongani: 'Are the hospitals coping with the HIV problem?

Thabisile: 'What I've noticed at St Mary's yesterday, I concluded that they are not coping. There were about five... six clients on the stretcher unattended in a difficult problem. And the others ended up grasping me, 'Sister, can't you help here?' Because they're seen helping this one that I'm coming with.'

Dawn fed the children and will monitor their situation.

Dawn: 'I can tell you it hasn't been easy. I have had days when I've thought of families that I could help, and I haven't had the resources to do it. And that is what has distressed me terribly.'

But because there are so many she has helped over the years, Carte Blanche thought it was time to make a difference. To support her in her quest, we got KFC involved through its Add Hope Hunger Alleviation Programme.

George Mazarakis (Executive Producer: Carte Blanche) 'For us it is a tremendous joy to be able to bring Keith to hand over R1.5-million worth of support for the next year so that you don't have to worry where you have to go find food for these people that you feed on a daily basis.'

Keith Warren (Managing Director: KFC): 'The need in this area is enormous. There are a lot of people that are really impoverished and are suffering from a lot of poverty and malnutrition related diseases. So to be able to give something back, to do something positive for our community is really important to us as KFC.'

Bongani: 'Dawn, what does today mean?'

Dawn: 'The gift that we've been given today will be etched in my heart until my last breath. I am so grateful, so very... it means a lot to my community. Thank you.'

Video
Bringing the ‘gees’
𝗧𝗵𝗶𝘀 𝘀𝘁𝗼𝗿𝘆 𝗼𝗿𝗶𝗴𝗶𝗻𝗮𝗹𝗹𝘆 𝗮𝗶𝗿𝗲𝗱 𝗼𝗻 𝟰 𝗦𝗲𝗽𝘁𝗲𝗺𝗯𝗲𝗿 𝟮𝟬𝟮𝟮 The stage was set: The Springbok A rugby side was facing a dangerous French Barbarians team at the spectacular Moses Mabhida stadium in Durban. It was billed as a clash of titans that would be played in front of an army of chanting spectators. But the stadium was empty… Alarmed, avid rugby supporter and patriot, Chulumanco Macingwane, made a few calls that would ultimately birth a new movement: the Gwijo Squad. The concept was simple: bring together a group of sports fans who would raise the roof at stadiums across the country. Now, almost a thousand strong, the Gwijo Squad is singing its way into the hearts of sports lovers. Your favourite episodes are now available on Carte Blanche: The Podcast: https://linktr.ee/carteblanchetv
Video
Electric avenue
𝗧𝗵𝗶𝘀 𝘀𝘁𝗼𝗿𝘆 𝗼𝗿𝗶𝗴𝗶𝗻𝗮𝗹𝗹𝘆 𝗮𝗶𝗿𝗲𝗱 𝗼𝗻 𝟭𝟬 𝗝𝘂𝗹𝘆 𝟮𝟬𝟮𝟮. With fossil fuel prices soaring, and climate change concerns peaking, now would seem like a good time to start the electric vehicle revolution. But with only a few thousand private electric vehicles on South African roads, will it be up to mass transport projects to bring the country in line with new technology and global mobility trends? Less than a quarter of the nation’s households own a car, so the real challenge is how to shift minibus taxis and passenger buses from diesel and petrol to electric. Is the aim of reducing the transport industry’s carbon footprint even feasible when faced with cash-strapped budgets? Carte Blanche meets the innovative engineers behind early projects that will shape the roll out of electric vehicles to move the masses despite the ongoing crisis of loadshedding.
Video
CB20: Baragwanath
Research shows that children of teen mothers are pre-disposed to birth defects for a variety of reasons, including socio-economic ones. And doctors at Chris Hani Baragwanath Hospital say disorders are becoming more common - so no better time to receive a brand new ICU from the Carte Blanche Making A Difference campaign to treat babies desperately in need of specialised treatment. Aired on 13 May 2012.
Video
CB20: BHP Billiton Paediatric Centre of Excellence
A special broadcast from Durban, where things will never be the same at King Edward VIII Hospital. That’s thanks to BHP Billiton and the Carte Blanche Making a Difference campaign who have handed over to the Department of Health a brand new hospital, financed by the private sector. It began in 2008 as an idea to celebrate Carte Blanche’s 20th birthday and it became a campaign bigger than anyone ever imagined. Aired on 10 June 2012.