News
15 November 2009
An update on the Carte Blanche Making a Difference campaign which has funded paediatric units and continues to change lives at State hospitals from Kimberley in the Northern Cape to King Edward VIII Hospital in Durban.
Subscribe To Watch

Last year, Carte Blanche launched its Making a Difference campaign to celebrate 20 years of broadcasting. The aim was to change the lives of patients and staff in the paediatric units at six State hospitals. But the results were in no way small. The generosity of corporate donors and the goodwill shown by Carte Blanche viewers has gone way beyond expectations:

At the Charlotte Maxeke Johannesburg Academic Hospital a state-of-the-art digital operating theatre and a heart lung machine were donated;

Universitas Academic in Bloemfontein have a refurbished neonatal ICU and high care ward.

But that's not all. In this update we'll tell you what's happening at the Kimberley hospital in the Northern Cape, Universitas Academic in Bloemfontein, Charlotte Maxeke Academic and Chris Hani Baragwanath, both in Johannesburg, and King Edward VIII in Durban.

In Kimberley a paediatric ICU ward will rise from this rubble. It's funded by BHP Billiton, which donated R5-million to equip and build a functional six-bed ward that will breathe new life into the heart-rending task of caring for critically ill children. A far cry from what it's like now.

Dr Pieter Jooste (Kimberley Academic): 'One often has to improvise because of lack of equipment and the care therefore is sub-optimal. So equipment of a good standard is actually quite important to deliver quality care.'

Dr Pieter Jooste is the only paediatrician at the Kimberley hospital and says new equipment will lessen his load.

Dr Jooste: 'Sometimes it happens that you don't have enough ventilators for instance. Then you have to choose who you are going to ventilate and then it depends on the prognoses of a child and you think, 'This one has a better prognosis'. Sometimes you have to choose.' 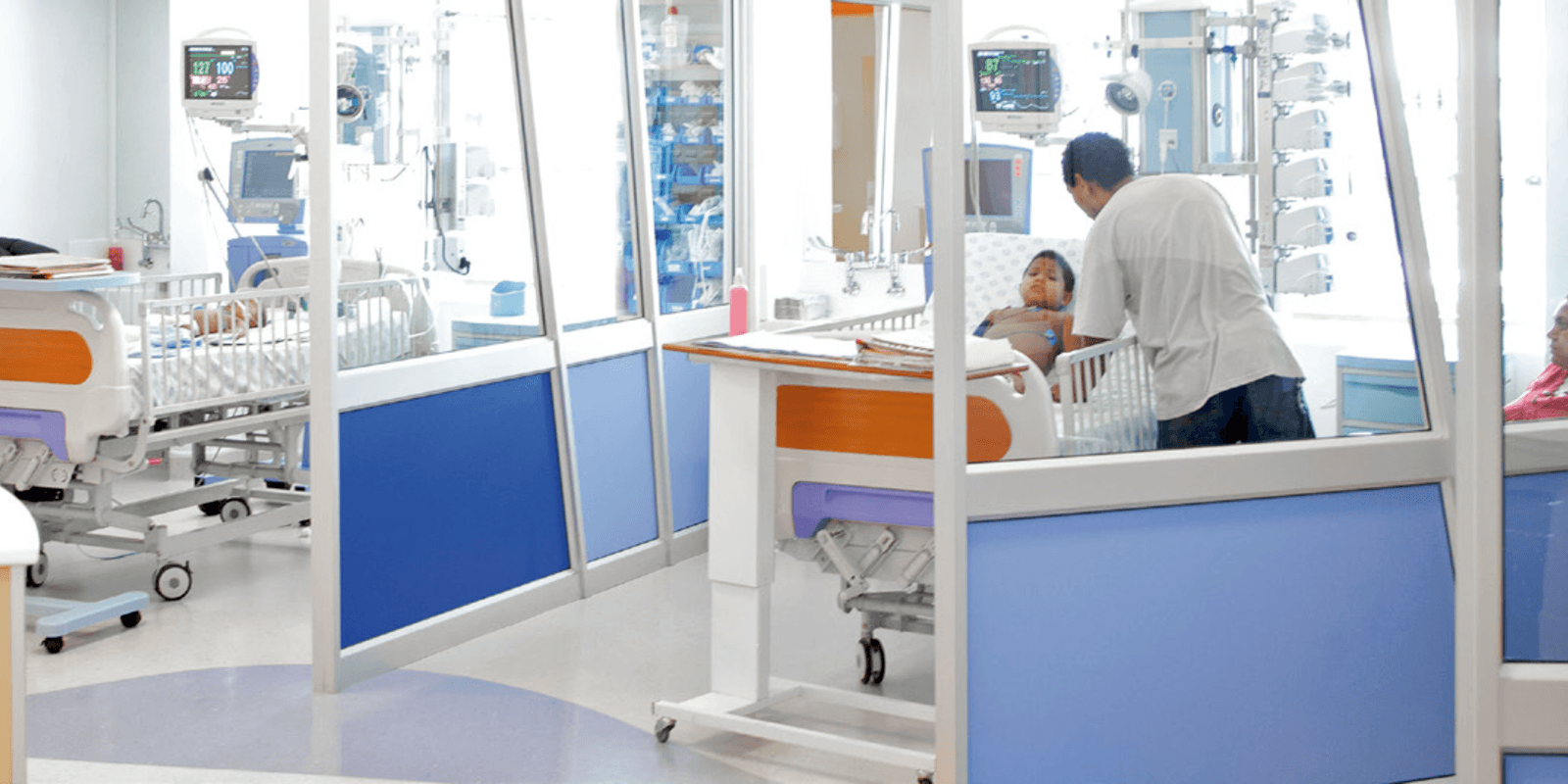 Dr Lincoln Solomon (Universitas Academic): 'We've been having a small intensive care unit with four beds, which served as a bottle-neck in the system. In other words we couldn't do enough care for children who needed intensive or high care because of this small amount of beds. This new high care area will help us immensely in breaking that bottle-neck.'
Most of all, surgical cases will benefit from this ward. Now the team is preparing to operate on a 12-year-old boy from Lesotho. He had to endure five operations back home, for what was thought to be appendicitis.

Paediatric surgeon Dr Esmé le Grange will try to repair the damage and find out why his wound won't heal.

Annika Larsen (Carte Blanche presenter): 'What is going to happen to the patient post-op?'

Dr Esmé le Grange (Paediatric surgeon): 'We are going to take him to our new high care unit which we are very grateful for because we expect a lot of fluid shifts during surgery and he will benefit from a high care unit.'

Annika: 'As a paediatric surgeon, how is a high care unit going to benefit you?'

Dr Le Grange: 'Oh, enormously because we've got so many patients that need high care and not intensive care post-operative and we in the past had to cancel a lot of patients because we didn't have that facility.'

The surgery took more than two hours but was successful and he is expected to recover soon.

After observation in the ICU, he was moved to the high care ward that was officially handed over to the hospital by KFC, which donated R1.5-million to equip this ward. The ward was opened by KFC CEO Keith Warren and the head of paediatrics Prof Andre Venter.

Prof Andre Venter (Univesitas Academic): 'Even if you give us nothing more, this will always be the KFC Ward.'

KFC was the first company to join the Making a Difference campaign.

Keith: 'It is amazing because when you sign a cheque you don't really understand what it means, but when you actually come in here and see the little chap that had heart surgery and another little girl that's had major brain damage... it is quite uplifting to know that we made a difference. And without the contribution we've made those kids may not survive.'

Annika: 'A paediatric unit can be far more expensive to kit out than an adult ward because it needs four sets of everything to cater for children from all different ages, from the tiny prem' babies to teenagers.'

But KFC's generosity didn't end at the Universitas Hospital. The company's Sthembile Shabangu says their Add Hope foundation donated another R600,000 for a feeding scheme for malnourished children. It kicked off at Lebone House, a home outside Bloemfontein for children affected by HIV/Aids.

Sthembile Shabangu (KFC): 'Prof Andre Venter said he admits at least 40% malnourished children to the hospital [and] that [he] really battles with operations because of malnutrition.'

Avril Snyman (Lebone House mother): 'Before KFC came on board we were feeding 600 children. And since they've come on board and we've got this Add Hope programme running we are reaching 3000 children... so it is an incredible increase in the children we've been able to meet.'

In Johannesburg at the Charlotte Maxeke Academic Hospital refurbishment of the paediatric ICU, high care ward and new doctors' rooms has begun. Another donation is a state-of-the-art x-ray machine, the South African invented Lodox, which takes an entire body x-ray in 13 seconds. It increases the survival rate of trauma patients, says head of surgery, Prof Ken Boffard.

Prof Ken Boffard (Charlotte Maxeke Johannesburg Academic): 'Patients come straight through the emergency doors and they come into this room. This is the Lodox machine and it stands for low dose x-ray. What it does allow us to do is do a complete x-ray of a patient in 13 seconds. And we get a whole body x-ray. So within under a minute, with the patient arriving, still on the ambulance equipment, we know exactly where the injuries are, we know exactly whether there are any bullets there, we can tell exactly what's wrong.'

The Lodox machine is worth R4-million. It's been donated by the Industrial Development Corporation of South Africa. It was officially handed over to the hospital by IDC CEO Geoffrey Qwena and Carte Blanche executive producer George Mazarakis.

Geoffrey Qwena (CEO: IDC): 'Every public hospital should have this because this is the machine where, particularly in terms of high volumes, where this machine will really make the lives of the doctors who are trying to help in making a difference much, much easier. That the people who would ordinarily have to have waited for a longer time for the diagnosis to be detected and react - that would be minimised. And for us to be a part of that, of that making that change, it is something that is a highlight for us.'

The Lodox is worlds removed from x-rays as we know it - no film, no waiting period, the patient doesn't have to move, there's a very low dose of radiation and a single image shows all the injuries within the body.

Prof Boffard: 'Here is another patient who has been shot in the leg and here is the Lodox picture that we've already seen from the machine, but the additional advantage of Lodox is that we can focus down and actually look at the blood vessels themselves. So here what I'll do is I'll look to the x-ray of this individual's leg and we put a needle into the blood vessel itself and then we've injected special contrast which runs in the blood vessel. And here you can see the main blood vessel going down the leg. And here you can see there's a patient that has been shot and there is a gap missing out of the blood vessel. So again, within a few seconds we know not only where the injury is, but also what to do about it.'

The predecessor of the Lodox was developed in the 1990s as an x-ray machine to curb theft at De Beers diamond mines, says Herman Potgieter, engineer for Lodox.

Herman Potgieter (Lodox engineer): 'And we came up with a concept to do very low dose x-rays of mine workers. That went back to the managers at De Beers and they gave us money to make a medical version of the first machine.'

The low dose radiation makes this ideal for children and paediatric cases will take preference in trauma situations.

The Chris Hani Baragwanath in Johannesburg has also received a Lodox machine from the IDC for its new trauma unit, to be completed in 2010. And refurbishment of the dilapidated and under-equipped neonatal operating theatre and recovery room will commence soon. Dr Jerome Loveland is head of paediatric surgery.

Dr Jerome Loveland (Chris Hani Baragwanath): 'It is going to mean better access to surgery, ultimately easier access to ICU beds, which these babies often have to wait one, two, three, sometimes four days for prior to getting their operation, so it is going to smooth out a lot of the logistical issues that they face in terms of getting their treatment.'

In Durban, at the King Edward VIII Hospital, equipment for paediatric wards to the value of R1.5-million was donated by several sponsors and a capital project of R20-million, donated by BHP Billiton, will be well underway in 2010. And as at the other hospitals under our wing, these developments will make a huge difference in the lives of our youth.

Video
CB20: Baragwanath
Research shows that children of teen mothers are pre-disposed to birth defects for a variety of reasons, including socio-economic ones. And doctors at Chris Hani Baragwanath Hospital say disorders are becoming more common - so no better time to receive a brand new ICU from the Carte Blanche Making A Difference campaign to treat babies desperately in need of specialised treatment. Aired on 13 May 2012.
Video
CB20: BHP Billiton Paediatric Centre of Excellence
A special broadcast from Durban, where things will never be the same at King Edward VIII Hospital. That’s thanks to BHP Billiton and the Carte Blanche Making a Difference campaign who have handed over to the Department of Health a brand new hospital, financed by the private sector. It began in 2008 as an idea to celebrate Carte Blanche’s 20th birthday and it became a campaign bigger than anyone ever imagined. Aired on 10 June 2012.
Video
A dam mess
𝗧𝗵𝗶𝘀 𝘀𝘁𝗼𝗿𝘆 𝗼𝗿𝗶𝗴𝗶𝗻𝗮𝗹𝗹𝘆 𝗮𝗶𝗿𝗲𝗱 𝗼𝗻 𝟭𝟬 𝗝𝘂𝗹𝘆 𝟮𝟬𝟮𝟮. A mega tailings dam built near the Vaal River in a bid to clean up a century of residual pollutants from mine workings in the North West sounded good on paper. But why were critical parts of the plan, including the extraction of toxic substances like radioactive uranium and sulphuric acid not fulfilled? Carte Blanche takes to the air to examine the potential for the dam’s walls to be breached, and the impact of that on nearby farmland, the critical Vaal River, and the millions of people relying on it for fresh water.
Video
Gqeberha's reckoning
𝗧𝗵𝗶𝘀 𝘀𝘁𝗼𝗿𝘆 𝗼𝗿𝗶𝗴𝗶𝗻𝗮𝗹𝗹𝘆 𝗮𝗶𝗿𝗲𝗱 𝗼𝗻 𝟭𝟵 𝗝𝘂𝗻𝗲 𝟮𝟬𝟮𝟮. They were lambasted for spending millions of rands on changing the name Port Elizabeth to Gqeberha. Residents argued the municipality had bigger priorities, none more so than the metro’s looming water crisis. But they were ignored. Now, the dams supplying urban areas in Nelson Mandela Bay in the Eastern Cape have less than 12 percent of usable water left. Taps are running dry, and it’s projected the municipality will face Day Zero before the end of June. With no significant rainfall expected before September, the city is scrambling to keep the water flowing. But infrastructure is crumbling, and continuous electricity blackouts are not helping. Carte Blanche investigates why Gqeberha is once again facing a water shortage.