News
05 October 2008
Hospital names may change, but Carte Blanche’s commitment to children being treated at these hospitals does not. Catch up with the latest on our campaign to make the work of dedicated doctors and staff in the paediatric units at some of South Africa’s biggest public hospitals easier, as well as charities who are also benefiting from the generosity of our viewing public.
Subscribe To Watch

Devi Sankaree Govender (Carte Blanche presenter): "It started as a dream to raise R20-million for desperately needy paediatric surgical units and child welfare organisations. Within six weeks that dream was fulfilled - major corporations and our viewers dug into their pockets to give these miracle workers a helping hand."

And today the fund stands millions over our target and it's still growing.

[Carte Blanche 7 September 2008] "Yes, so it's a little bit like playing Russian Roulette, if you haven't got a place or bed for the baby then obviously there is not much that you can do."

Kuseni Dlamni (Head of Anglo American, SA): "The Chinese have a wonderful saying: seeing is the beginning of understanding.' And if you get people to see things they haven't seen before it really challenges them to change their mindsets."

[Carte Blanche 14 September 2008] Nthabiseng: "Sometimes we don't have food. So we just sleep without eating."

[Carte Blanche 14 September 2008] Bongani: "How do you cope when those situations happen?"

Adrian Gore (CEO: Discovery): "You know when you see that reality and think of yourself sitting in a corporate boardroom making allocations, that chasm closes immediately and you realise the importance of what we do."

Corporates, like Standard Bank, had no hesitation in handing over one-and-a-half million.

And Discovery, who gave 2.5-million for the refurbishment of a ward at Johannesburg Hospital.

Adrian: "I think the campaign is an absolutely fantastic idea and we support it in every respect."

Adrian: "Discovery's entire purpose in this kind of space is about healthcare, about improving the healthcare system, about uplifting the public health care system and so I think the continuity of it, of your vision with ours, resonates with us. So we jumped at the opportunity."

Bongani: "What do you hope to achieve with your contribution?"

[Carte Blanche 10 August 2008] Derek: Without surgery he would have died. Still, this little boy was refused a children's ICU bed.

Bongani: "And the whole process is going to be properly audited and managed and you will go back to those projects and see what happened."

Adrian: "That is crucial issue. I don't think these things are in any way one-off. You donate money and sign a check and thereafter people's lives are better - it is a perpetual wheel that you are oiling."

[Carte Blanche 3 August 2008] Derek: "Something about the administration of checks and balances..."

Devi: And to ensure complete transparency, two top firms have come on board, pro bono. Webber Wentzel, who have formed a trust, and Deloitte, who will manage the donations that will go into buying desperately needed equipment.

[Carte Blanche 10 August 2008] Professor Graeme Pitcher (Department Head - Paediatric Surgery): "The requests go into this Behemoth of an enormous system that we as paediatricians don't understand. And the bottom line is that the equipment does not come out the other side."

Nkaki Matlala (Medi-Clinic, Director Clinical Relations): "We have said we would rather look at equipment rather than money because one of the areas we have identified is that sometimes you might give out the money, but it might not be used in areas where you think it needs to be used."

Devi: If anyone should know about hospital needs, it is Surgeon Nkaki Matlala. Nkaki is director of clinical relations for hospital group Medi-Clinic. They donated a million rand.

Derek: "So it does seem you are interested in the health of the nation?"

Nkaki: "Not only are we interested in the health of our nation, we are concerned that it is at the low ebb it is at."

[Carte Blanche 7 September 2008] Derek: "This baby is eight weeks premature and weighs about 1.54kg. Fortunately there is an ICU bed available to him if he needs it. But that's not the case for many babies born here in the Free State - underweight and struggling to survive."

Justin Rohloff (Trustee: KFC Hunger to Hope Trust): "The Carte Blanche campaign and Bloemfontein Academic resonated very well with our brand. And choosing a project where we can see the bricks and mortar going into it will give us the deliverables for that. So we will be able to tangibly see the difference."

Devi: Justin Rohlof is a trustee the KFC Hunger to Hope Trust. They donated one-and-a-half-million rand towards refurbishing the paediatric ward at Bloemfontein Academic.

[Carte Blanche 7 September 2008] Derek: "This is just an empty shell of what used to be an intensive care unit. It's still got all the emergency plugs and the oxygen outlets - what it doesn't have is the beds and the monitoring equipment. Now, a major cash injection could transform this into a much needed high care ward."

Justin: "We are not just donating money and running away - we are helping to build in the community."

Devi: KFC donated an additional amount of R600 000 towards a feeding scheme at the hospital.

Justin: "Hopefully fewer people will suffer on the operating table in the paediatric ward and there will be better nourished kids arriving for their operations." 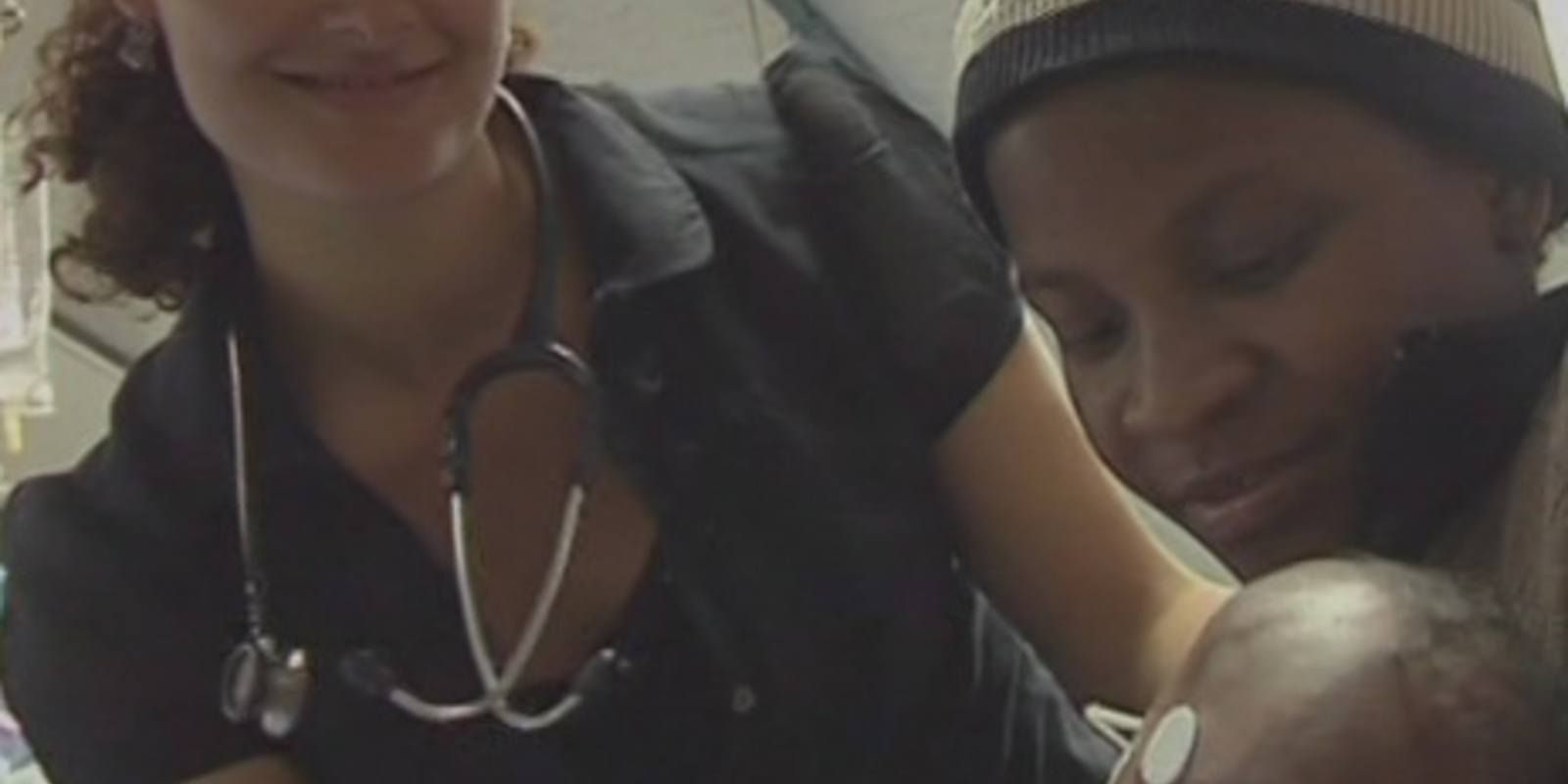 Kuseni: "We all know the deficit that is facing our hospitals in broader health care infrastructure in this country so to the extent that we can make a modest contribution we are extremely proud, as Anglo American, of this partnership with Carte Blanche in this way."

[Carte Blanche 10 August 2008] Derek: "I'm always very humbled by the dedication and expertise of these surgeons - the whole team here. And it's a tragedy that they don't get the right support and equipment."

Devi: "It wasn't just big corporates who came to the party. Some individuals felt so moved they dipped into their own pockets wanting to make a personal contribution."

Devi: "What was your reaction to the making a difference campaign when you saw it on Carte Blanche?"

Successful businessman Douw Steyn donated a million rand of his own money.

Douw: "That's right within the line of things that I support. Those are the things that touch my heart."

Devi: "This is a personal contribution and you did it in a heartbeat."

Devi: "You're smiling, how much of a heartbeat?"

Douw: "It was half a heartbeat... my heart was already in it."

[Carte Blanche archive] Devi: Baby Tuli is eight hours old and she weights only 1.5kg. The team quickly connects her onto the life support machine.

Douw: "Health care is a problem all over world. Even in the States it's a problem and they are trying to get everyone to have health care. They're the richest country in the world and the government isn't always trying to skirt their responsibility - it's the sheer weight of economics. So as a businessman I try to help where I can because I know the government can't shoulder the whole burden."

Devi: "The welfare organisations which focus on children have very different needs in comparison to hospitals. They need supplies, food but most of all they need people."

[Carte Blanche 14 September 2008] Bonita Gorrie-Nuttall (Carte Blanche presenter): Ditebogo and Lebogang are 10-year-old twins. Their little brother Moeketsi is eight. None of them know when their birthdays are, and their mother rented this room before she abandoned them. They are visibly dirty and neglected, with their scalps covered in a fungal infection.

Devi: "Our viewers were also touched by the stories and made contributions to the campaign through smses and in the end every single cent counts."

We have received hundreds of thousands of rands and we're still counting: money that will go to Johannesburg Child Welfare and the Johannesburg Parent and Child Counselling Centre.

[Carte Blanche 14 September 2008] Bongani: "If someone wanted to help you, how would you like them to help you?"

[Carte Blanche 14 September 2008] Ntahbiseng: "Take care of us and love us as their own children."

School boy 1: "Despite what people say it is true, one person can make a difference."

Devi: The pupils from Krugersdorp High School went the extra mile and ran competitions, saved pocket money and worked to raise in the end R18 243.

School boy 2: "There is some money that we don't really use well, so we decided to put it to good use and give it to people that are less privileged than us."

Every cent of this money will make a difference to a child's life and perhaps this is what the Making a Difference campaign is all about; it is simply Ubuntu' at its best - the culture of giving with no pay-back.

Video
CB20: Baragwanath
Research shows that children of teen mothers are pre-disposed to birth defects for a variety of reasons, including socio-economic ones. And doctors at Chris Hani Baragwanath Hospital say disorders are becoming more common - so no better time to receive a brand new ICU from the Carte Blanche Making A Difference campaign to treat babies desperately in need of specialised treatment. Aired on 13 May 2012.
Video
CB20: BHP Billiton Paediatric Centre of Excellence
A special broadcast from Durban, where things will never be the same at King Edward VIII Hospital. That’s thanks to BHP Billiton and the Carte Blanche Making a Difference campaign who have handed over to the Department of Health a brand new hospital, financed by the private sector. It began in 2008 as an idea to celebrate Carte Blanche’s 20th birthday and it became a campaign bigger than anyone ever imagined. Aired on 10 June 2012.
Video
A dam mess
𝗧𝗵𝗶𝘀 𝘀𝘁𝗼𝗿𝘆 𝗼𝗿𝗶𝗴𝗶𝗻𝗮𝗹𝗹𝘆 𝗮𝗶𝗿𝗲𝗱 𝗼𝗻 𝟭𝟬 𝗝𝘂𝗹𝘆 𝟮𝟬𝟮𝟮. A mega tailings dam built near the Vaal River in a bid to clean up a century of residual pollutants from mine workings in the North West sounded good on paper. But why were critical parts of the plan, including the extraction of toxic substances like radioactive uranium and sulphuric acid not fulfilled? Carte Blanche takes to the air to examine the potential for the dam’s walls to be breached, and the impact of that on nearby farmland, the critical Vaal River, and the millions of people relying on it for fresh water.
Video
Gqeberha's reckoning
𝗧𝗵𝗶𝘀 𝘀𝘁𝗼𝗿𝘆 𝗼𝗿𝗶𝗴𝗶𝗻𝗮𝗹𝗹𝘆 𝗮𝗶𝗿𝗲𝗱 𝗼𝗻 𝟭𝟵 𝗝𝘂𝗻𝗲 𝟮𝟬𝟮𝟮. They were lambasted for spending millions of rands on changing the name Port Elizabeth to Gqeberha. Residents argued the municipality had bigger priorities, none more so than the metro’s looming water crisis. But they were ignored. Now, the dams supplying urban areas in Nelson Mandela Bay in the Eastern Cape have less than 12 percent of usable water left. Taps are running dry, and it’s projected the municipality will face Day Zero before the end of June. With no significant rainfall expected before September, the city is scrambling to keep the water flowing. But infrastructure is crumbling, and continuous electricity blackouts are not helping. Carte Blanche investigates why Gqeberha is once again facing a water shortage.