Running from comets, a Bollywood mystery and a stunt man caught up in relic hustling – live out your action-adventure fantasy this week on DStv 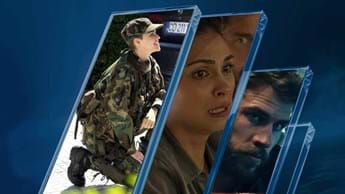 It’s a new week and let’s face it – it’s cold! With weather like this, it’s best to snuggle under a warm blanket with a steaming hot cup of hot chocolate and a good movie. But if you don’t want to nap off, DStv has plenty of movies to keep your heart racing. There’s apocalyptic action, Bollywood thrillers and fantasy favourites to warm you from head to toe.

Gerard Butler has traded his butt-kicking skills from Olympus Has Fallen and 300, for the role of a father trying to save his family from impending doom in apocalyptic thriller Greenland.

Then if you’re in the mood for some Bollywood entertainment, Sadak 2 is a mysterious thriller about a young woman on a mission to expose fake gurus after suffering a family trauma at the hands of 1 such conman. And there’s butt-kicking Kung-Fu action in Defying Chase, in which a stuntman gets tangled up in shady criminal activities and has to fight his way out.

There are also some delightfully horrible dating disaster stories in store for Lifetime’s (DStv channel 131) Nightmarish Dating weekend, and don’t miss the musical drama in The High Note on Showmax.

Grab the remote and get cosy on the couch when you check out DStv’s home cinema collection here. And for more snack-sized info on DStv’s biggest shows, check out #OhSnack on the DStv YouTube Channel.

Desperate situations, desperate people and exciting action – catch it all on DStv.

Massive fragments from a comet fall to Earth in an extinction-level event in this disaster movie. John Garrity (Gerard Butler) is 1 of the few people invited to shelter in a far-off bunker with his family, but getting there in time presents a challenge as the family gets separated in the panicking hordes and fragments of the comet start destroying communications and transport methods.

In this fight-scene heavy flick filled with real-life martial artists like Song Yue, gifted stuntman (Li Bing Yuan) has to pull off his best moves to survive when he gets embroiled with contraband cultural relic smugglers. He’ll go up against a master boxer, a powerful fighter and other deadly enemies as he struggles to keep his life and his freedom.

Araya Desai (Alia Bhatt) wants to expose false gurus, specifically Guru Gyaan Prakash (Makarand Deshpande), who played a part in the destruction of her family and the death of her beloved mother. She seeks help from Ravi Kishmore Vermna (Sanjay Dutt), a taxi driver, to take her to the region of Kailash where she wants to fulfil her mother’s last wish.

Idris Elba gives a stellar performance in the Tyler Perry romcom as Monty James, a father and an ex-con who is down on his luck and trying to provide for his 3 daughters. His troublesome ex-wife, Jennifer (Tasha Smith), starts dating a drug dealer while Monty becomes a driver for a successful lawyer, Julia Rossmore (Gabrielle Union).

Watch from Thursday, 17 June on Showmax

DStv’s June Harry Potter festival continues with the infamous, “Did you put your name in the Goblet of Fiyahhhh, Harry?!?” Dragons, eggs, abductions, Quidditch balls and more wizarding world shenanigans!

Harry Potter and The Goblet Of Fire

The 4th instalment of the Harry Potter series sees wizard Harry Potter (Daniel Radcliffe) enter the Tri-Wizard tournament, where he must face multiple challenges to prove his worth against brilliant students from 2 other Wizarding Schools in Europe. But lurking in the shadows is Harry’s greatest enemy, Voldemort (Ralph Fiennes), and with the help of Voldemort’s servant, Peter Pettigrew (Timothy Spall), Voldemort once again takes human form and starts pulling evil tricks.

Fantastic Beasts: The Crimes of Grindelwald

The dark wizard Gellert Grindelwald (Johnny Depp) escapes from prison and sets out his plan to find Credence Barebone (Ezra Miller), an Obscurial (a human host for an uncontrollable magical force), who he wants to use against the Ministry of Magic in his plot to take over the world. Albus Dumbledore (Jude Law) asks Newt Scamander (Eddie Redmayne) to find Credence and keep him safe from Grindelwald.

Get the DStv app (Apple or Android) and download episodes to watch on your phone or tablet – just remember to connect to Wi-Fi first to avoid surprise data costs.