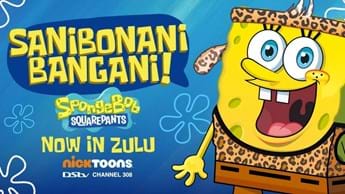 NickToons (DStv Channel 308) brings the beach to your home this December as SpongeBob SquarePants is dubbed in isiZulu.

The little ones will get to see SpongeBob in their home language or a friend’s language. It’s a learn-along opportunity for the whole family, too, because all the Zulu dubbed episodes will also have English subtitles. With all the fun, they’ll soak up the language lessons like a…a sponge.

Watch SpongeBob SquarePants: IsiZulu Mondays-Fridays (from 5 December) at 15:00 on NickToons (DStv Channel 308) and on Catch Up.

The channel tested interest in a Zulu-dubbed version of the cartoon on the animated character’s birthday in July. SpongeBob fans and newcomers will come into the action with a special episode written by Mr. Lawrence, who’s normally the voice of the evil Sheldon J Plankton – a tiny supervillain who is hellbent on uncovering the recipe for Bikini Bottom’s most popular fast-food item, the Krabby Patty. Like in all episodes, fans will follow SpongeBob and his best friend, Patrick’s misadventures, triumphs and epic failures.

“Paramount Africa and Nickelodeon are committed to playing a pivotal role in promoting diversity, creativity and edutainment for African youth. Through Nickelodeon Africa’s dubbing of SpongeBob SquarePants into isiZulu, we are unleashing the power of content, unleashing the value, impact and emotion of an already iconic piece of content. In so doing, we allow our children to see and hear themselves in the characters they have grown to love,” explains Monde Twala, Senior Vice President and General Manager, Paramount Africa and Peer Lead, BET International.

“We couldn’t just choose any show to achieve our mission of cultural impact and better representation on our channel; we had to choose the best. SpongeBob SquarePants has earned his stripes and this isiZulu series aims to preserve local language base and reach for new audiences.”

NickToons (DStv Channel 308) is available on DStv Premium, Compact Plus, Compact and Family. To upgrade your existing package, click here. Or if you'd like to Get DStv and find a service that suits your needs here.