Watch I Love That For You Season 1 on DStv 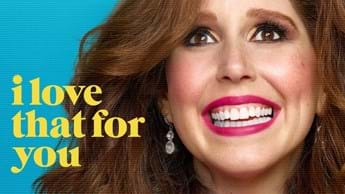 American television has a side we never see. Aside from their soaps, shows and news, they have free-to-air home shopping television channels. They’re the last word in glamour. Imagine if you could switch on the telly at three in the morning or eleven at night, and someone like the actual Kgomotso Christopher (Dineo in telenovela Legacy) was standing there in a ballgown, selling you anything from bling to a braai… not just in an ad, but for a whole programme in which she was seductively showing it off – live!

Just pick up your phone and tap the app, or quote your credit card number to a helpful call centre staff (and if you get lucky, maybe even the host herself will take your call), and Kgomotso will send it to you. It’s that kind of fever dream.

There’s a trick to it, and even today, online shopping or going to the mall can’t beat it. The channel’s hosts and demonstrators don’t just point at things and tell you to buy them, they weave a story in which those things are going to make your life better. Relatable yet remote, glamorous and enticing… it’s like OnlyFans, but for stuff. And it’s all centred on a force of personality so strong that kids in small towns around the US, who don’t even bother dreaming about Hollywood, get stars in their eyes about a career on Home Shopping TV. Comedian Vanessa Bayer, co-writer and star of new comedy series I Love That For You on 1Magic (DStv Channel 103), was one of those kids. She would even record episodes off the TV.

Vanessa explains that she was drawn to the show as she was fascinated by the home shopping channel hosts. “The QVC (Quality Vacation Club – the name of America’s most popular home shopping channel) hosts that I loved, there’s something just really pleasant about them. They’re funny and fun, but they seem relatable as well. They just make the product seem so beautiful in a way that you just want to listen to them talk,” explains Vanessa. “The things that, to me, are true, true, true home shopping are the jewellery, the clothing and shoes. They would be selling a necklace, but then they would have on 20 rings and 20 bracelets. Because they would be showing off the jewellery while they were selling other jewellery. That, to me is, a glamorous woman, a woman who has 20 rings on. They’d say: ‘You can wear this to a brunch with your friends or wear it to your daughter’s graduation, and you will be the belle of the ball’. And I'd be like: ‘Yeah, I could take this to my daughter’s graduation.’ I was only 9 years old, I didn't have a daughter who was graduating, but I felt like, ‘That's true!’”

For anyone with even the tiniest taste for camp, it’s a glorious buffet of soft-voiced persuasion and heightened reality. The jewellery on its black velvet cushion, and the soft manicured hands floating gently around it or softly caressing it to show it off…

On screen in I Love That For You, Vanessa plays Joanna Gold. It’s the pinnacle of Joanna’s ambitions to be a host on (fictional) home shopping channel SVN. She’s all huge friendly teeth, desperate, eager eyes and a gawky determination to sell the heck out of whatever she’s given. But behind the screens Vanessa is also co-creator and co-writer of the series… and she was there for the mischief and making up silly product and brand names like “Ya Gotta”!

Thanks to her years of watching home shopping TV (and a refresher course of QVC with the very same hosts that she grew up watching), Vanessa is fluent not just in the rhythm of how the hosts speak, but the precise detail of how certain words are pronounced. “I would [in her normal life] always pronounce ‘jewellery’ with three syllables, and they would say it as two syllables as if there is a ‘u’ in it. Or they would say they would buy things for their ‘jewellery collection’ that is so specific to home shopping,” Vanessa explains. “They have their own language in the way they sell things. They talk about the details and the way that they touch the products," she says. It’s a way of speaking she describes as “confident” and “mesmerising” as well as “soothing” and “beautiful”. And then, because it’s comedy, she got to play with that and push it just that vital bit further.

Now go lovingly caress your remote and think of all the ways it’s about to improve your life!

TLC (DStv channel 135) is available on DStv Premium, Compact Plus, Compact, Family and Access. To upgrade your existing package, click here. Or if you'd like to Get DStv, find a service that suits your needs here.