What to Watch on DStv Compact Plus in September2022 | Highlights

Competitive September on DStv Compact Plus

It’s a fight for your love this September on DStv Compact Plus – and you’re the winner! 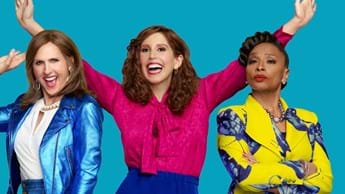 You’re a champion this September with DStv Compact Plus. While everyone’s out there fighting to be the best, you’re on your throne, ready to award the ultimate honour – the title of your favourite show.

New comedy series I Love That For You shows just what people will do to win a slot as host of one of those “made for TV” product channels and Power Book III: Raising Kanan Season 2 is all about the struggle to rule the streets. Blown Away Season 2 gives us high blown crafts and arts drama, and in Alone: Polar Bear Island Season 9, adventurers are willing to get eaten by a whole polar bear just to prove they’re good enough to be on your TV.

Because you get to see almost everything on DStv with Compact Plus, check out our other monthly highlights packages for news about September’s hit series like Murder Inc: Pain, Love & Family Season 1, Miss Scarlet And The Duke Season 2, Better Call Saul Season 6, Coming Out Season 2, Running Wild With Bear Grylls: The Challenge Season 1, Houvrou Of Trouvrou Season 1, and Dr. Pimple Popper Season 4.

Love Me shows on DStv Compact Plus

I Love That For You Season 1

Small town nobody Joanna Gold (Vanessa Bayer) wants nothing more in life than to host a TV show on one of America’s Home Shopping networks, SVN. After she fluffs her audition, she plays on the producers’ and her co-stars’ sympathies by claiming that she has cancer. Just like that, she’s on TV, where her bumbling charm soon has viewers stampeding in, and long-time SVN host Jackie Stilton (Molly Shannon) steps up to mentor Joanna, despite her evil co-worker Beth Ann’s (Ayden Mayeri) eye rolling contempt.

This Power drama series prequel is set in the 1990s and follows the rise of Ghost’s great rival, Kanan Stark. At the end of Season 1, Kanan had to flee his home after shooting a police officer, his biological father Detective Howard, and leaving him for dead. Now Kanan’s mom Raq is caught up in an endless struggle to hold and expand control of her drug empire on the streets of Queens, New York. And when Howard claims to have amnesia, Raq brings Kanan back home and shows him the ropes of controlling the business, from the trap houses to the “boardroom”.

Two Bachelorettes for the price of one? Yes please! Flight instructor Rachel Recchia and her co-runner up from The Bachelor Season 26, ICU nurse Gabby Windey, will be able to compare notes as they meet their 32 suitors, including a guy who’s a “meatball enthusiast”, a set of twins and other assorted dudes and bros who could afford to leave their day jobs for an indeterminate number of weeks. The first episode is, as always, a surreal treat, as it includes a children’s choir singing a song titled "Clayton Sucks", in memory of the Bachelor who rejected them both.

You never know when it’ll be your last night on Earth! This true crime series examines 10 cases in which exciting parties, ordinary work night shifts, pub crawls and a casino trip end in horror. We see how investigators traced the victim’s steps on that fatal night, to find their killers. Cases include that of young actress Jessie Blodgett, toy shop assistant manager Larry Wells, and of Morna Jean Brennen, whose attacker dismembered her body and left bits of her in bags all over a winter landscape.

Reality glass-blowing competition is presented by Nick Uhas (creator of science-based YouTube channel Nickipedia) and the prize is a residency at the Corning Museum Of Glass. This season’s challenges range from creating original cartoon characters, to making realistic replicas of household objects like vacuum cleaners, to an epic nature-based challenge that references climate change, which sees them make everything from icebergs to insects in glass. The guest judges include Queer Eye’s design expert Bobby Berk, and Blown Away season 1 winner, Deborah Czeresko.

Adventurers can choose just 10 items to take into the wilderness with them. They’re then dropped off in Southern Labrador, Canada, each of them with their own camera. Each must survive totally isolated, no film crew, as they record their experiences. The last person left standing without calling for evacuation wins $500,000 (R8,509,190). This season, aside from the cold, lack of food, water and isolation, they’ll have to be on their guard, because they’re in polar bear territory. Well, they would be if the pack ice had formed in Baffin Bay and the Davis Strait, but it had not at the time this series was filmed.

Also on Compact Plus this September

Check out the other highlights packages for more on these shows, which you will also be able to watch this September…