If you’re subscribed to DStv Premium or Compact Plus, connect your DStv decoder to the Internet today to watch brand-new episodes of Suidooster one day before the episode premiere on kykNET (DStv channel 144). 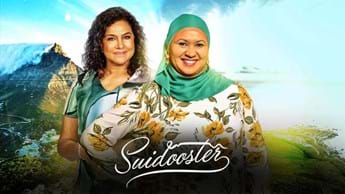 For more than six years, characters from the fictional Cape Town suburb of Ruiterbosch have been on our screens tackling social issues both controversial and sensational.

The series, named in honour of the Cape’s famed Southeaster wind, continues to grow from strength to strength. It tells the stories of the community and its diverse residents of Ruiterbosch.

What makes Suidooster so unique is that it’s filmed in Milnerton, Cape Town. It's also written by writers who live and come from diverse communities from the city, and the characters are portrayed by actors who’ve lived around the Mother City for years. While on-screen inclusion and diversity are what make Ruiterbosch work, the same applies behind the scenes. The soapie is produced by Gambit Films, an award-winning production company run by CEO and executive producer Bradley Joshua.

Did you know that if you’re subscribed to DStv Premium or DStv Compact Plus and your DStv decoder is connected to the Internet, you can watch brand-new episodes of Suidooster one day before everyone else?

It's true! From Monday, 22 March 2021, you will be able to watch the next day’s episode at 19:00 on Catch Up or via the DStv app. This means you’ll watch brand-new episodes one day before they premiere on kykNET (DStv channel 144) and kykNET&Kie (DStv channel 145).

Remember that your decoder must be connected to the Internet in order to receive early access to brand-new episodes of Suidooster.

Still not sure how early access works? Scroll down for a helpful infographic.

Coming up on Suidooster this month:

Thursday, 1 April 2021
Carmen still avoids the hospital while Mrs J doubts her decision to organise a job for Gino. Kate struggles to accept that her last chance for love is gone.

Friday, 2 April 2021
Kate tries to suppress her emotions while Gino sees an opportunity and makes use of it. Carmen’s day starts off with a surprise and concludes with an impossible choice...

Monday, 5 April 2021
Siya makes a case for Gino to Mrs J while Joy realises yet again that she isn’t part of the group. Carmen and Rhafiek have a difficult task to perform.

Tuesday, 6 April 2021
Joy is in a good mood after spending time with her dad and thanks Siya for his support, but he has his reservations. Meanwhile, Gino gets lucky by chance.

Wednesday, 7 April 2021
Chris confronts Kate about her decision while the Samsodiens struggle with their emotions. Gino has a very important decision to make...

Thursday, 8 April 2021
Gino executes his evil plans and Mrs J ends up in trouble. Carmen tries to remain positive but has a setback. Kaashifa takes Imraan to task.

Monday, 12 April 2021
Mymoena feels bad about pressurising Carmen and Kate is determined to start afresh. Mrs J is convinced that she knows who stole the church’s money but Siya knows better...

Tuesday, 13 April 2021
Bridgette receives bad news while Imraan loses his cool and does something impulsive. Rhafiek struggles to connect with Carmen and Gino has a big decision to make...

Wednesday, 14 April 2021
Siya is anxious to learn what Gino decided while Imraan tries to fix his mistakes. Bridgette goes out of her way to humiliate Chris.

Thursday, 15 April 2021
Gino tries to make amends with everyone but Joy has had enough. Bridgette is still upset with Chris while Rhafiek hides something from Carmen to spare her pain.

Friday, 16 April 2021
Carmen and Rhafiek face a difficult day while Siya arrives at a crossroads. Kaashifa rubs Imraan up the wrong way...

Monday, 19 April 2021
Chris makes Kate a promise, but Bridgette makes an unreasonable demand. Rhafiek and Carmen break their news to his parents, but Rhafiek gets yet another shock.

Tuesday, 20 April 2021
AB and Mymoena try to convince Rhafiek and Carmen to change their minds. Kaashifa is stubborn while Bridgette struggles to make peace with Chris’s romantic decisions.

Wednesday, 21 April 2021
Siya attempts another step forward in his life. Kaashifa and Imraan struggle to get past their differences, while Rhafiek and Carmen are at a crossroads.

Thursday, 22 April 2021
Kaashifa has a hectic day and an unexpected guest shows up at Mrs J’s house...

Friday, 23 April 2021
Rhafiek delivers a desperate last plea to Carmen. Zoe cheers Bridgette up and Mrs J hears who was at her house while she was out.

Monday, 26 April 2021
Mrs J is glad to have Nicci back but Bridgette and Lee-Ann feel differently. AB and Mymoena disagree with Rhafiek and Carmen’s decision and try to put a stop to it.

Wednesday, 28 April 2021
Siya makes a suggestion for a youth evening and gets roped in. Nicci wants to leave again and Mrs J tries to stop her. Rhafiek tries to take a day off, but the walls of the apartment are closing in on him.

Thursday, 29 April 2021
Bridgette wants to celebrate her reconciliation with Nicci but Nazeem and Tim have a plan to spoil everything. Imraan is furious about Kaashifa’s new work duties while Siya makes a big decision about his future.

Friday, 30 April 2021
Nicci makes a shocking discovery about the Jacobs family while Kaashifa struggles to keep it together. Siya has good news for a change, but is it good news for Danni?

How to watch Suidooster online