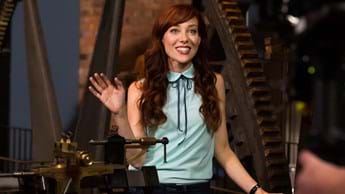 International Women’s Day on Monday, 8 March, aims to raise the profile of women in all walks of life and careers across history, the arts and sciences, to show girls a different picture of the world. The theme of the day this year is Choose To Challenge which asks all of us to help create a world in which any girl child can chase her dreams and realise her potential by raising the awareness of bias, celebrating women’s achievements and increasing the visibility of women in all professions.

Step 1 on that road is representation and awareness. And in the week of 8 March, as well as on the day itself, DStv’s shows on the child-focused School of Laughter channels and the edutainment-oriented Curiosity Channel (DStv Channel 185) will be putting the spotlight on female characters and real-life women in a fun and engaging way that both boys and girls will enjoy. Check out what’s in store.

Women Who Made History S1

To stand out in history, these famous female leaders, politicians and activists had to truly swim against the tide. This documentary series looks at how we see them now, and how their behaviour was viewed in their time, from Egyptian queen and wily diplomat Cleopatra to visionary peasant military leader Joan of Arc, all the way through to anti-Nazi activist Sophie Scholl. On Monday, kids will be able to learn about Cleopatra, Joan of Arc, Elizabeth The First and Catherine The Great.

Miranda Cosgrove presents this series about science and scientists with fun experiments and demonstrations presented by real working female scientists across all fields, from chemists to conservationists and more.

In the first episode, Miranda meets a chemist who uses science to entertain, a huge gathering of female chemists sets off a fun chemical reaction simultaneously, a chemist teaches Miranda and her friends about make-up science, and one of Miranda’s friends meets a young scientist who’s working on saving wetlands. In the second episode, Miranda chats to a photographer who uses pictures to help save the environment, Miranda will show viewers how to make a hologram using a smartphone, an expert takes us hunting for scorpions and we meet a marine biologist who is training sharks.

Da Vinci is celebrating the achievements of women around the world and encouraging girls to reach for their dreams and explore new fields through all their female-led shows. Host Alie Ward is setting off to meet some girls who code on Did I Mention Invention to talk about hi-tech career paths and female inventors.

Maddie Moate shows us how pianos and drums work in Do You Know? and follow Doc K in her mind-blowing science experiments on Make Me A Super. Meanwhile, Matilda (and the Ramsay Bunch) doesn’t let her youth hold her back in the kitchen. She shows us how to make fit-foods that’ll help you win a marathon. And Michaela searches for her dream job in When I Grow Up because the possibilities truly are endless. Reach for the moon and stars, girls.

The girls take charge this week as Manny’s mom comes to visit in El Tigre and he finds out about her past as a superheroine. Meanwhile, Jenny the robot gets her own line of toys and becomes a viral sensation and even Felicity the Kitty asks some big questions about life. It’s all light-hearted fun with these series’ female characters leading the action.

This science-fiction animated comedy for kids is from the creative team of The Amazing World of Gumball. It follows human boy Elliott and his mom, Frankie (an awesome geologist), as they embark on an unexpected journey across the universe aboard the spaceship Centrium, which is packed with amazing beings from all over the galaxies. Soon, Elliott makes a new best friend, a dinosaur named Mo who lives in Biosphere 1138 aboard the Centrium. While most kids' shows leave Mom behind or kill her off, Elliott From Earth brings her along and has Frankie exploring space and alien life from a scientist’s point of view with all the sense of wonder that involves.

Sign up with the DStv app, a free service for all DStv subscribers. With the DStv app, the same channels you watch on your decoder at home are available for you to stream online or on your mobile device wherever you are.