Watch the best friends on DStv 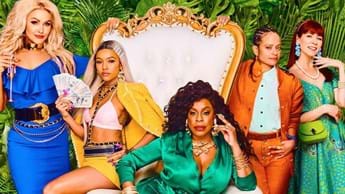 Baby, it’s cold outside, but it’s warm in our hearts – because we have friends. Our BFFs don’t just understand those weird little things we do, they treasure them. They are the family we choose to help one another to make sense of the world. No wonder we love watching TV shows about besties. This May, we’ll be tuning in to see some of our favourite friends in action.

The best of the besties

Combat veteran Riley (Parker Young) and his Afghani former interpreter Al (Adhir Kalyan) are helping one another to navigate a new “hostile” territory – normal civilian life in the United States – in this unusual sitcom. Riley and Al have that unbreakable bond forged during life-or-death situations. It’s the kind of relationship where you can fight as safely as you can have a heart-to-heart. This season we’ll see Al and Riley tackle everything from the evacuation of Al’s sister from Afghanistan ahead of the Taliban invasion, to taking a role in raising Riley’s daughter Hazel, to helping each other with therapy and education. It’s what family would do together because that’s what these guys are, and that’s why we love to watch them.

Fledgling crime boss Desna (Niecy Nash-Betts) and her nail technician BFFs have gone hardcore on the “ride or die” saying. They’ve had to take on the Russian Mafia, the cops, drug lords, and cheating boyfriends just to get some breathing room, but they’ve always bounced back looking glamorous. This season they’re tackling a truly epic friend group split after their security expert Quiet Ann (Judy Reyes) burned down Desna’s casino in the season 3 finale. And now Jenn (Jenn Lyon), Virginia (Karreuche Tran), and Polly (Carrie Preston) are having to play peacemaker or pick sides. It’s going to be a tough season because there’s nothing as frightening as someone knowing your squishy underbelly, and then siding with an enemy. Claws fans, stick with it, though, because some splits aren’t what they seem to be, and some loyalties can’t be bought.

Till death us do part

Wedding planner Jessica (Ilse-Lee van Niekerk) is navigating life and her 30s hand-in-hand with her BFFs – her software developer sister Luca (Blyde Smit) and Jessica’s best friend Abi (Bianca Flanders) the baker in this romantic comedy series that makes us feel like “glitter is exploding inside us”. It’s about taking on a time of life when people seem to go all out to try to destroy your belief in love, fairytales and even your ideas. But Jessica, Luca and Abi can always go back to one another and affirm that life doesn’t have to be that way. We all need the kind of friends who remind us that we’re worth the world, that our ideas will work, and that love shouldn’t hurt. Then we can go out there and hold our own, like the most determined iron first that ever slapped back through a velvet glove.

This sketch comedy series is no stranger to poking fun at both the friendships that sustain us, and the ones that have us asking, “and why am I friends with you again?” Our core 4 of Robin Thede, Ashley Nicole Black, Skye Townsend and Gabrielle Dennis can play out any friend group, including those Oprah and Gayle-style besties who’re closer than a married couple. But this season they also tackle how weird it is to try and bring a new person into a friend group, and the moments that strain friendship’s ability to hold your tongue. Would you point out to a friend that the “child” they have adopted is, in fact, a full-grown adult? The best part of watching this show is knowing behind the scenes that each of the performers has found at least 3 other people who not only get their sense of humour, but are willing to go to insane lengths for a laugh. Real friends are dumb together.

While Queen Sugar has traced the Bordelon siblings’ journey from being 3 estranged people to becoming a real family in a way that feels like friendship, this season does something remarkable when it brings back Nova’s (Rutina Wesley) childhood friend, Prosper’s (Henry G Sanders) daughter Billie (Tammy Townsend). In episode 2 when we find out that Billie and Nova fell out as teens when Nova didn’t believe Billie’s sexual assault claims, and through the rest of the season, we’ll see how the 2 work together to rebuild the bridge between then piece by piece, starting with Billie telling her truth again, and Nova believing her this time, accepting and apologising for her mistake and how it hurt Billie. Queen Sugar is never, ever scared to go there with tough conversation, and that’s what makes the whole show a best friend.

Also look out for…