Death In Paradise Season 11’s clever cases put detectives to the test, but real-life crimes are even crazier 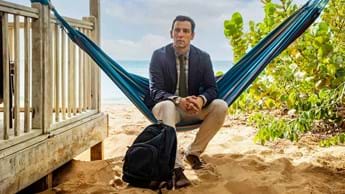 True crime fans, it’s wild out there! For every detective series filled with “crazy” crimes and a maze of clues and misdirection, there’s a real-life case that could go toe-to-toe with it for intrigue, scandal and sheer weirdness. As a case in point, we looked at Death In Paradise Season 11, which is 1 of our favourite “evil under the sun” crime dramas, and matched up its off the wall cases to some real-life stories coming your way this month…

In Death In Paradise episode 1 a man is found stabbed dead near a telephone box and the detectives from the island of St. Marie find out it’s thanks to a ransom drop off gone wrong… but there’s a twist to the tale involving family trauma, greed and a prison boyfriend the family hated. For a similar but different tale, try An Unexpected Killer Season 2, episode 12, in which a mayor’s daughter called 911 after finding her mother murdered. Suspicion turned to the dodgy boyfriend of their pregnant high school student daughter. But the reason for the murder and, eventually, for the killer being found and the family turning on them? Cold, hard cash. And it took a rival candidate to supposedly grieving mayor Barry Waites to uncover the truth.

In episode 6 a woman phones the police to report a murder, but when the police arrive on the scene, she’s the 1 who’s been murdered. Looking for a case in which a phone twists the timeline and becomes vital in a murder investigation? Look no further than Caught In The Net Season 1, which is all about the digital traces we unwittingly scatter around us everywhere we go, and how detectives can now use these to solve crimes. In episode 6, we’ll see how police working on the missing persons case of Julie Ann Gonzalez used her phone GPS data to link its movements to those of her estranged husband George DeLaCruz, allowing them to build a murder case without even having a corpse.

In episode 5 a famous singer’s death could be the result of a tragic miscalculation and an allergic reaction to common medication… or it could be cold blooded murder, by someone the victim trusted with her health. Looking for more tales of medical malice? In Evil Lives Here Season 2 episode 7, we’re told the chilling tale of Texas neurosurgeon Dr Christopher Duntsch whose patients were complaining about scarring and maiming. Investigators had a hard time figuring out whether he was maliciously damaging patients, or whether he was somehow just that incompetent that he was paralysing and killing people in his care.

In episode 3 murder gets truly twisted as a high-profile media influencer is apparently stabbed to death in mid-air during a corporate parachute jump with his team. And this season, as well as investigating this influencer’s murder, the detectives of Saint Marie must look into the deaths of 2 musicians and a chess champion. But as high flying as Death In Paradise goes, they can’t beat real life. British socialite Ghislaine Maxwell is currently on trial for being the business partner (and partner in every other way, too), of a notorious sex trafficker Jeffrey Epstein. She stands accused of supplying underaged victims to him and his high-profile clients using his private jet nicknamed the “Lolita Express”. His “friends” included princes, presidents, politicians, modelling agents, and billionaires.

In episode 2, St. Marie’s golf course becomes a crime scene when the owner’s wife receives a phone call from her brother-in-law, who’s beaten to death during their call. It seems to be an open and shut case when a bloodied golf club is found in the locker belonging to the victim’s brother, who’s the golf course owner. Death In Paradise isn’t the only show making us wonder what’s buried in the bunkers and lost in the rough. Is that white glimmer in the grass a ball or a fragment of bone? In Buried In The Backyard Season 4, episode 13 it’s bone, after the remains of 74-year-old retired judge Skip Scandirito were found inside 2 separate rubbish bags buried on the abandoned Ocean Breeze Golf Course.

Watch CBS Justice now Buried In The Back Yard now

So, wrap up warmly as you prepare to get the chills with crime stories on DStv this May!