Director Steve McQueen reveals why Small Axe could only be made now, and only on public television

It’s taken nearly 20 years for Steve McQueen to bring the race-driven movie anthology, Small Axe, to the small screen – and he couldn’t be prouder 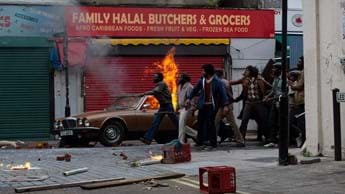 The Small Axe 5-movie anthology isn’t light viewing on Mondays on BBC Brit (DStv 120) at 21:00. But that is the purpose, says Sir Steven “Steve” McQueen, the director, writer and producer of the movie series.

While two of the 5 films are directly biographical ‒ like Red, White And Blue, in which John Boyega portrays real-life British cop and crusader against racism Leroy Logan ‒ others have real-life backstories that are played out by fictional characters. Their aim is to tell the story of (largely) the West Indian community living in London in the ’70s and ’80s and the intolerance they encountered,  not just from society but from the police too.

Small Axe is Sir Steve’s passion project, and his conviction rings in every word as he tells us about it…

Small Axe is Steve’s first venture into the world of television, despite it not being a TV series in the traditional sense. He’s best known for his big-screen productions like Academy Award-winning drama 12 Years A Slave (2013), the visually heavy tale of a freeman stolen back into slavery in 1840s America.

“The timing was perfect. I am not sure that I could have created Small Axe 12 years ago,” says Steve, who first had the idea in the early 2000s.

“We made it happen. It wasn’t a miracle or a gift from the heavens. It was a lot of effort and hard work to get these stories out. I am grateful to the BBC who, from the very beginning, supported us with this process for 11 years. I’ve never been rushed to make Small Axe. I wasn’t told who to cast. We got people who were available when we wanted to make it, people we trusted with bringing these stories to life.”

Steve wasn’t alone in his quest to tell the story. “It’s been an amalgamation of effort from people like [co-executive producer] Tracey Scoffield and the cast and crew, truly amazing people,” he says. “There’s been a lot of support for this project. The timing, it’s interesting. So much has happened [in 2020]. Firstly, [the police’s murder of African-American] George Floyd, then the COVID-19 pandemic, the large proportion of black people dying of that. It’s one of those things that we’ve been very fortunate that it [Small Axe] has been put out right now [for broadcast]. It could’ve happened at any time but it’s here now. I don’t know if there is such a thing as a right or a wrong time – I’m happy that it exists!”

Power to take on a mountain

It was important for Steve not just to make the Small Axe movies, which are all feature-length, but also that they were aired on public (in the UK) television. “This is cinema but on TV. Remember that. But the reason I wanted them on the BBC was that I wanted my mum to watch them. These are national stories and I wanted them to go through the bloodstream of the country. I wanted them to be accessible and the BBC, for me, is the only organisation that can do that [compared with other TV services]. The only two things that hold this country together for me are the NHS [National Health Service] and the BBC,” he insists.

Steve’s co-executive producer, Tracey Scoffield, adds that there were a couple of challenges getting everything lined up. But that’s normal for any production, let alone an anthology of films all made pretty much at the same time.

“The chief challenges weren’t selecting the stories [there were more than 5 originally] because Steve did that in the writers’ room. We had no shortcuts. We’re not basing them on articles – we had a tremendous amount of research to do. We had to go into the communities to get these stories. We had to talk to people and that was a long process. Production-wise, like I said, 5 movies at 5 locations with 5 different casts on a television schedule. People in the industry will understand that. We had a director [Steve] with more energy and drive than anyone I know. That got us [the entire production] through a schedule like that.”

While Steve took more than a decade to create Small Axe, it’s something he admits would’ve been very different if it was made earlier in his career. “I’ve grown not just as a man but as a storyteller. I have grown into understanding what makes a great production. If I’d made Small Axe when I made Hunger [the 2008 historical drama movie about the 1981 Irish hunger strike that won Steve the Caméra d'Or award], it wouldn’t be what it is. It would carry weight and meaning. But for me, as the creator, I needed to grow and become who I am right now, to tell this story right now.”

Episodes air 24 hours after the British premiere in this order:

How to watch Small Axe online

With the DStv app, the same channels you watch on your decoder at home are available for you to stream online at https://now.dstv.com/, or using the DStv app on your phone.