Rob van Vuuren takes us back in time to talk about his role in the new History Channel miniseries, Lincoln 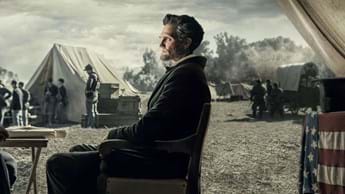 South African actor and comedian Rob van Vuuren is drawlin’ and y’allin’ with the best of them as he plays Kentucky-born politician Montgomery Blair in the new History Channel (DStv Channel 186) docu-drama mini-series, Lincoln. But he’s surrounded by imposters.

“What is great and it's a trend that's happening now is that when this international work is being shot in South Africa, there are more and more South Africans playing more and more significant roles. 10-15 years ago, we were lucky if we got to be “guy in Uniform 2 who dies in the second scene,” kind of thing. But as more productions have been shot here and they realise that the quality level that South African casts and crews have, there's been more and more opportunities. And it's now becoming the norm,” says Rob.

What did you learn about history, working on Lincoln?

“What's amazing about these productions is that it really comes to life – the nuances of these big political events. We tend to study them in a 2-dimensional way, but once you're immersed in it, and you're playing with the minutiae of a relationship and the dynamics there, the history comes to life. It’s a lot more visceral, which is what I really loved about it. (I love) just being suddenly dropped into those little moments of history and having them come alive in a way where you really understand, “Oh, it's real people, with real emotions”.

What did you know about Lincoln and his presidency before this role?

“All the big things that you would know from basic history: the Gettysburg Address, his role in the Civil War. And I watched the Spielberg/Daniel Day Lewis Lincoln, which was epic and that went into huge amount of detail.”

Did you think with your actor playing Lincoln, Graham Sibley, what a daunting thing it would be following Daniel Day Lewis?

“Who would ever want to follow Daniel Day Lewis doing anything? Even if he hadn’t, just the sheer weight of that character (Lincoln) and the importance that it has within the American psyche, and the kind of the birth of the American nation and democracy is really big. But I think Graham Sibley was just absolutely phenomenal. He was really just trying to put that out of his mind and do his interpretation. The great thing about someone like Lincoln is there is so much to draw from in terms of the archival kind of material that's available. He's so striking, and so, so interesting. As an actor, if you can lock onto those things in a way that feels authentic, then you're halfway there. Stephen really enjoyed the discussion around what everyone was thinking, where the characters were at, and the dynamics at play in terms of those power relations and the political games that were being waged throughout.”

Lincoln's a big name, Montgomery, maybe not so much here. What did you have to draw on the role?

“The writers in the series have a wealth of knowledge and they really gave us a lot of material to draw from, particularly about the dynamics within that cabinet. And for me, in terms of extra research, it was going a little bit into his background of the family. It helps inform your accent. And just in terms of the relationships between the different characters in that room, there's a kind of unspoken tension before anything has been said. That is informed by those characters’ specific relation to each other. The production and the research behind it were so great, giving us as much as possible to inform that dynamic.”

How would you describe Montgomery Blair's dynamic with Lincoln?

“In the beginning, he's been brought in as the Postmaster General (an important post in the day, when the mail was the equivalent of what the internet is now). He is opposed to the idea of war. To him, it's quite shocking that this path is being taken. So, there is a direct conflict there with Lincoln. And there's 1 scene in particular, it was really fun to play, where I got to lose my temper a bit and shouted at him across the table, “Blood will be on your hands!” That was fun.”

What was useful for you in terms of capturing the accent that you wanted?

“Doing basic, basic research on Kentucky and Maryland, and finding a happy medium between the 2. He was born and schooled in Kentucky but lived in Maryland as a young adult. That kind of grounding really helps. And then, on these productions, we have a really incredible accent coach, Stephen Jennings. And if you've done your basic preparation, he really elevates it. He's there on set every day just to make sure you're hitting the right marks and getting the right intonations and inflections where you need them. Having that kind of expert guidance throughout is so important.”

What was it like for you seeing yourself in full make-up and costume?

“1 of the reasons I became an actor is because I like playing dress up! Period is always fun because it is clothes you don't ever get to wear. They just knew how to dress back then. And I loved playing a character older than myself, I got to have the grey wig and sideburns. I love the authenticity that lends. Once you are in that set with the stage production and art direction’s real attention to detail, with the costume and the make-up and then you add to that the accent work and the research, you are in that little bubble. It really feels super authentic, which is just such a gift as an actor.”

What aspects of the costume made you think, “Respect to my ancestors but no thanks!”

“The heat! There is so many layers and its thick material. We were shooting in Cape Town in March/April. It was still pretty warm. We are on set with big lights, and the wig gets hot. I'm glad I can wear a T-shirt in real life, but it's nice to play dress-up every now and again.”

History (DStv Channel 186) is available on DStv Premium and Compact Plus. To upgrade your existing package, click here. Or if you'd like to Get DStv, find a service that suits your needs here.