The must-watch spooky movies on DStv this Halloween

Mummies and mayhem, sharks and dragons – Halloween movies to thrill the grownups this October on DStv 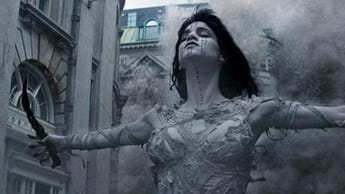 It’s officially Spooky Season and the only time of the year when we say Boo to a great movie.

DStv has a number of special creature features to delight audiences. From an ancient cursed mummy, to dragons controlled by Nazis and killer sharks on a rampage of revenge, the gang’s all here and it’s time for that popcorn, pumpkin, costume party on your couch.

PS: keep an eye out for our feature on kids’ spooktacular movies, too.

Move over, Arnold Vosloo – there’s a new mummy in town and she’s a demon! A pair of treasure-hunting soldiers unleash a curse on the world while transporting a mummy princess back to London where they happen to bump into Dr. Jekyll, who wants to use the cursed Egyptian to unleash his alter-ego, Mr. Hyde. With Tom Cruise, Sofia Boutella, Annabelle Wallis and Russel Crowe.

A newly single woman thinks that she’s moving into a safe space when she ditches her long-term boyfriend and rents a new apartment. What she doesn’t know is that her “friendly” new landlord is obsessed with her to the point of murder and is watching from the shadows. With Caroline Harris and Ignacyo Matynia.

Set during World War 2, the Allied forces have all but forced the Nazi horde out of North Africa… but the enemy has a secret weapon they’re about to unleash: Dragons. With Scott Martin and Tom Rachford.

Move, scientists – get out of mama’s way! A foolish group of researchers kidnap a baby Great White Shark, unaware that its much bigger, much angrier mother is literally circling them, looking for a leg to nibble on. With Dennis Quaid and Louis Gossett Jr.

What’s worse than a giant shark hunting you under the water? Chief Brody killed a giant Great White in the waters of Amity, but now his widow thinks that another bigger, badder shark has swum into the waters looking for payback. And it’s hungry! With Lorraine Gary and Mario Van Peebles.

How to watch Halloween online

Download the DStv app, a free service for all DStv subscribers. With the DStv app, the same channels you watch on your decoder at home are available for you to stream online or on your mobile device.