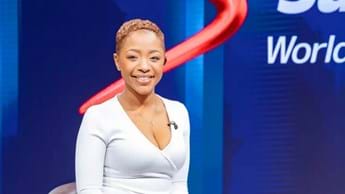 Like so many of her colleagues in the world of broadcasting, Thato Moeng had to wade through prejudice and doubts over whether she could crack it as a female.

Those hurdles have since been placed by respect and admiration: Moeng now ranks among most popular figures on SuperSport, known for her easygoing manner as much as her insight.

Moeng is consequently among those chosen to be celebrated in SuperSport’s “Define your Great” campaign, an opportunity for the names behind the headlines to reflect on their individual journeys through the world of sport.

The campaign launched on SuperSport recently and gives a glimpse into what has defined these women’s paths and what continues to drive them.

“Telling stories and sharing my love for sport with others who are just as excited about a fixture as I am,” she says of her motivation. “The entertainment value in sport is a great motivator, the adrenaline and passion is exciting.”

Pretoria-born and raised, Moeng was shaped by the twin worlds of sport and entertainment. She was shipped off as a youngster to boarding school where her passion for sport was fully harnessed as she took to softball, netball and swimming.

She shifted into the arts later on, but her stint at film school was unfulfilling. Editing wasn’t her forté, so she moved into journalism which gave her another channel for storytelling.

“I loved how unapologetic all three were and [how they] owned their spaces. In the case of Penny it was also because I used to swim and had this dream of being the first black South African to bring back an Olympic gold medal in the pool. Decades later and there is still no black South African female who has done this. It also reminds me of representation, in the media and sports sphere. I got to interview her once and just being in her space was mesmerising.”

Moeng was attracted to sport by witnessing how it challenged the mind and body, the winning mentality and adrenaline rush.

“I hated that at some point I had to focus on art and not sport, and I was good but not outstandingly amazing in sport,” she says. “My little brother was a super athlete. He was amazing when it came to track and field events. He also played football, and his teammates would pick him up and force him to play even though he did not really like it.”

She says that all three were pioneers, particularly at a time when women working in sport did not seem like a viable career option.

“It had never really been done, and they truly opened the doors for other women, including myself, to a world of uncharted waters.”

Chauke, especially, was an inspirational figure.

“I fondly remember how she made me feel when watching her on television when South Africa was awarded the hosting of the 2010 FIFA World Cup, how she was a key figure on the road to 2010. I then later got to meet her and realised that she is as authentic as I had imagined her to be.”

Those doors Moeng speaks of opened for her too. She lists the 2017 FIFA Confederations Cup and 2018 FIFA World Cup in Russia as career highlights.

“Getting the opportunity to do pitch-side reports pre- and post-match is indescribable. Working with the likes of Phil Neville and Danny Murphy throughout was an unimaginable experience. It was only after the final whistle of the World Cup final when I realised what I had just done; it still feels surreal . . . only a handful of broadcasters around the world get that opportunity.”

Closer to home, her hosting of the South African Sports Awards three months after giving birth to her daughter has a special place in her memory.

“I was doubting if I could still do it. Would I be articulate enough, would I remember how it’s done?” she asked herself.

The minute she walked on stage, 10 seconds before going live, her mojo returned. “It was like riding a bicycle. In hindsight I was unnecessarily second guessing myself.”

She remains just as passionate as the day she started at SuperSport, in 2010, and is motivated by telling stories and sharing her love for sport with others.

“The entertainment value in sport is a great motivator, the adrenaline and passion is exciting.”

She adores the world of broadcasting, but says that had she chosen another career it might also have been in television, perhaps as a director or member of a production company. She also wouldn’t mind owning a football or swimming club.

Hopefully Moeng has many years left in broadcasting, which ought to shape her legacy. If she has anything to do with it, she wants it to be for “showcasing and exposing new sporting talent from all corners of the world, talent that ordinarily would not have been seen.”

She doesn’t mind the focus on her role and embraces the possibility of doing great work.

Asked what it means to be great within, her pithy answer summed up the excellence of her work.

“Being great means never giving up on yourself, the continuous pursuit of fulfilling your passion and being able to share those life lessons with others.”