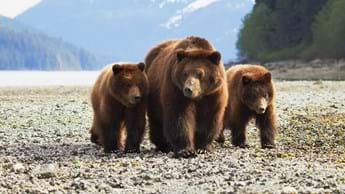 DStv Premium not only outwits and outplays with the brand new All Stars season of Survivor: Australia, it takes us inside the action on filming one of this year’s most dazzling BBC nature series, Eden: Untamed Planet. And wherever you want to go, from Atlantis to Alaska, DStv Premium has your ticket, along with the flashiest car to get you there, courtesy of Kindig Customs.

See inside the series and find out how wildlife filmmakers from the BBC got those incredible shots in some of the world’s most pristine wilderness, like the San Rafael Glacier in Patagonia. And see the lengths they went to capture footage of hyenas and jackals preying on seals on Namibia’s Skeleton Coast.

Fantasy novelist Stel Pavlou teams up with geologist, explorer and environmental scientist, “Volcano” Jess Phoenix to explore locations around the world that are rumoured to be the location of Atlantis. They start their hunt in Bulgaria, where evidence of an ancient catastrophe points to a lost city beneath the Black Sea.

In Australia’s first-ever All Stars season, 24 returning contestants complete to find the best of the best. Look out for several upsets this season, including a family emergency that sends one Survivor home, and a surprise host at the reunion who had to step in because of Jonathan LaPaglia’s COVID travel issues.

Gold miners Fred Hurt and his son Dustin dive beneath Alaska's wild Cahoon Creek on their new claim, in search of their fortune. This season Fred and Dustin are splitting up to double their chances of striking it rich, but the wilderness is fighting back and the site is an engineering nightmare.

Dave Kindig of Kindig It Design turns out one-of-a-kind vehicles for his demanding (and sometimes famous) clientele. This season Dave searches for the elusive Hebmueller VW Bug and once he has his prize, Dave wants to convert it into an automatic and make it a hot rod, while keeping its retro-cool.