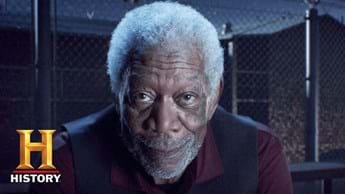 Morgan is drawing on that association in his new upcoming History (DStv channel 186) documentary series, Great Escapes With Morgan Freeman, which he hosts and executive produced through his company, Revelations Entertainment (Invictus, The Story of God, and The Story of Us).

DStv chatted with Morgan at the Television Critics Association panel in August, along with co-executive producers James Younger and Geoffrey Sharp, to find out more about this upcoming series.

“Generally, the guards in these prisons feel like that. ‘Can’t nobody get out of here.’ The idea that somebody is going to cut a hole through a 7-foot thick concrete wall? ‘Nah. Not gonna happen. Someone going to crawl 100 yards through a steam pipe? Nah! How [are] they gonna get in?’” Morgan laughs. But where there’s a will, there’s a way.

“My favourite jailhouse break is of the Great Escape of WWII (the Allied soldiers’ escape from the German POW camp Stalag Luft III). I don't think that people who get out of prison escape if they are caught and brought back. If you escaped, you're gone. And with The Great Escape, a lot of those guys left and they were gone,” says Morgan. “Man. They had everything they needed. They had photo IDs. And they made clothes out of some of their mattressing. There were just incredible bits of engineering and creativity that went into that escape.”

James adds, “What we're focusing on is this resourcefulness that people have and the amazing level of ingenuity that people go to. That's the kind of the uplifting human side of this story, people are remarkably resourceful.”

The power of persistence

Even when the escapee is morally dodgy, there’s something about a prison break that’s uplifting, says Morgan. “It’s the realisation that whatever you really want, you will go and do,” explains Morgan. “So, you ask why they (the prisoners) use all of this great ingenuity (to escape) if they could have done it outside for something good? But there wasn't anything outside they wanted bad enough. Getting out of prison, it's really a life desire.”

James adds,” There are some amazing stories of the things people did to get out. The guy who escaped Pittsburgh developed an entire illegal winemaking operation as a cover for his truly illegal operation, which was tunnelling out of the prison. And this guy, Nuno Pontes, made a copy of a key by walking up behind the guard and squeezing a Styrofoam cup against the key while it was on the guard's belt! And he used that Styrofoam cup impression to make a new key. That was just so he could start digging the tunnel, not so he could escape.”

“There are a million stories like that,” Geoffrey adds. “One of the great things that one of the guards said to us was, ‘You know, a prisoner has got all day, every day. We're watching them, but they're watching us and they’ve got all day, 24 hours a day, 7 days a week, 365 days a year.’ The point he was making was that no matter how much you think you can keep them in, they're constantly looking for the crack, or the weakness in the system. And if they're smart enough, they figure it out.”

Morgan emphasises that what we’re really looking at in this show is the power of daily persistence. “It's not like an overnight inspiration thing. It’s years and years and years, not only of planning, but just trying to do. Think of Dannemora. The very thought of it is daunting! But there's got to be a way,” he says.

Prison escapes are the stuff of legend, so Morgan’s team did a lot of work to turn that into the stuff of History – by hunting down the facts.

Geoffrey explains, “We have researchers and producers and writers who talk to the people that were involved in this show. We have both guards, prison officials, historians, and in several cases, the people who did the escaping, which is kind of unique. Our researchers did an amazing job finding people. Sometimes they have what they call a Prison Escape Document. So, after this escape has happened and the state of Pennsylvania is totally ticked off, they pay to figure out, ‘How did they get through?’ And that document is like a multiple, 1 000-page document in which they now go back and try to figure out, ‘What did we do wrong? How did they get out?’ So, we use that document.”

As always in history, there are gaps, though. “Now, I would say that it's interesting that several of the escapees, who are first-person escapees, describe those documents as often exculpatory towards the guards’ side of the story, and that they're not necessarily accurate. And several of our escapees would not tell us a few key things that, to this day, no one knows, even us, as much as we tried to get that information. Because there’s still people that they don't want to get into trouble.”