What to Watch on Catch Up | Highlights | DStv

Busy November? Catch Up with DStv 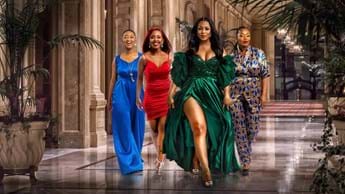 Watch TV in a time and space that suits you and your family this November with DStv Catch Up on DStv.

Even if your favourite show is on when you’re out, you don’t have to miss out, thanks to Catch Up. You can watch the latest episodes of your favourite shows at any time, on any device. Exactly one minute after the scheduled TV broadcast ends, selected episodes and movies will be available to watch on Catch Up – with no interruptions in the middle from ads. Or you could let episodes stack up and binge them when you’re in the mood. From Premium to Access, everyone can stream DStv’s most popular shows from their package on Catch Up, using an internet connection via their Explora or Explora Ultra, or using the DStv App on their PC, Android or IOS devices.

You can also see trailers for upcoming series and get early access to popular soaps like The River and Suidooster, and hit international series.

Keep reading to find out what will be available on your package this November. Click on the links below to watch now!

Lion: The Rise and Fall of the Marsh Pride Season 1

Conservationist Jonathan Scott has been following the fate of Kenya’s famous Marsh Pride of lions since 1977. In this documentary, Jonathan and guide Jackson Looseyia, ecologist Dr Paula Kahumbu, Michael Kaelo of the Mara Predator Conservation Programme, and others tell the story of the pride, its internal struggles, and clashes with neighbouring Masai settlers.

Last season ended with forensic psychologist Kristen and wanna-be priest David kissing, just after she admitted to him that she murdered Orson LeRoux. A forked tongue hints that either David is seeing things, or Kristen really is demon possessed now. The is-she-or-isn’t she question becomes this season’s big mystery, so we’ll be watching closely . . . and so will Kristen’s nemesis, demon lawyer Leland Thompson.

Cunning art thief Lexi and FBI agent-turned-lawyer Matt are off on new daring archaeological adventures, set off by a sign at the Vatican indicating that someone’s on a quest for the soul of Ghengis Khan. This season’s travels will take them to a fight club in Vietnam, through Russia, Mongolia and a chemical wasteland in Kazakhstan, and to Hong Kong on the trail of the Spirit Banner.

Let The Right One In Season 1

This moving supernatural drama series is Inspired by the 2004 Swedish novel of the same name by John Ajvide Lindqvist. 12-year-old Eleanor (Madison Taylor Baez) has been a vampire for 10 years now. Turned too young, she has to depend on her dad Mark (Demián Bichir) to supply her with blood. But Eleanor’s growing friendship with Isaiah Cole (Ian Foreman) could turn deadly.

Country music titans The Romans run the Monarch record label. But while Dad Albie (Trace Adkins) and mom Dottie (Susan Sarandon) are crowd favourites, it’s unclear which of their kids will step into their boots: Nicky (Anna Friel) the favourite, jealous Gigi (Beth Ditto), or handsome businessman Luke (Joshua Sasse), who’s having an affair with his lesbian sister’s wife.

This true crime series showcases investigations in which, just like in a novel, one crucial, unexpected piece of evidence unravelled a cover-up – like the running tap that connected two murders to a serial killer-rapist who was just getting started, or the dog hair that exposed a killer. Experts like Louis Eliopulos (Chief of the Forensic Sciences Division at NCIS), journalists, survivors and victims’ families take us inside the story.

Musician Johannes Kerkorrel sparked a spirit of uprising in young Afrikaners during the late 1980s as a key figure in the revolutionary anti-apartheid Voëlvry Tour. He rocked the country again when he took his own life in 2002. His death did not cut short his inspiration and his influence, and this documentary explores where he came from, the roots of rebellion, and his cultural impact as an artist.

TS Madison is a whole lotta woman! This outspoken, glamorous trans activist takes us inside her business dealings and home life as she strives to become the first ever black trans woman to host her mainstream talk show. Her YouTube channel has already won her 200,000 fans, who stop by for emotional honesty and a boost of pride, and now it’s time to take that energy to the world.

November is UFO month on History and this documentary, based on the book Mirage Men by Mark Pilkington, kicks us off with claims that the US government fanned the flames of the UFO craze to cover up their real technological advances and operations during the Cold War era. Also look out for Indistinguishable From Magic from Sunday, 13 November, and Westall ’66: A Suburban UFO Mystery from Sunday, 20 November, both on Catch Up.

In this two-episode documentary, paleoanthropologist Ella Al-Shamahi (who’s also a stand-up comedian) explores the science behind the so-called curse of the pharaohs. She’ll examine artefacts from Tutankhamun’s tomb, along with the tomb itself, to determine whether years of build-up within the unopened tomb could have led to a number of “cursed” deaths among early Egyptologists from Howard Carter’s 1922 expedition.

Actress and comedian Melissa McCarthy and her cousin and BFF Jenna Perusich are making over the homes of some people who’ve been putting others first for years. And they’ll be roping in The Property Brothers to help them. The show introduces us to inspirational people like the director of a non-profit organisation helping families in need.

It’s a wild reality ride as four real-life taxi bosses take us inside the street rules that they live or die by. Soweto widow Nthabiseng Keroane (@buyikey2 on TikTok) is determined to make space for women in the market, the KZN-based twin Biyela brothers have a price on their heads in Empangeni, and Mpumalanga’s Sabelo Ndaba really got into the business after he was paralysed during a failed assassination attempt.

For trophy wife Zozi, her posh pal Katlego who has friends in high places, and their fabulous bestie Nomzamo, there’s never been a problem that money can’t solve in this glamorous new drama. The ladies have no intention of being poor, or in prison, so when an impulsive lie leads to murder, the three-work overtime to keep society off the scent.

Kardashian mom Kris Jenner has trademarked the word Momager but she’s not the only ambitious mama in Calabasas. Remember Jessica and her daughter Breanna Bunevacz from Making A Model With Yolanda Hadid? They’re back in this new reality series, along with three other families who believe that they have the savvy to turn their kids into superstars.

Adam Savage from the Mythbusters series is having so much fun! His Iron Man project sets the bar sky high from episode 1. We’ll see Adam, Gravity Industries founder Richard Browning, and 3D printing experts from Colorado School of Mines, try to create a real-life Iron Man suit of titanium armour that really flies. Also coming up, Adam forges a sword from an iron meteorite.

In a hospital, overcrowding, overwork, negligence, misconduct and malpractice can lead to tragedy. But when it’s a patient’s or a loved one’s word against an expert’s, we can feel powerless. This reality series will show South Africans who are suffering the lifelong consequences of medical mistakes how to seek financial compensation in a civil case.

We Own This City Season 1

David Simon and John Pelecanos (creators of The Wire) bring us a new story from Baltimore’s mean streets, this time based on Baltimore Sun reporter Justin Fenton’s true crime book on the rise and fall of the Baltimore Police Department's Gun Trace Task Force. Watch it for Jon Bernthal’s (The Punisher) epic performance as Sergeant Wayne Jenkins.

My Life Is Murder Season 3

Private investigator Alexa Crowe tracks down the truth in some truly bizarre cases this season. A crime novelist is found dead inside a sculpture, a horse has been accused of killing its handler, and when a Christmas crazy decorator falls from their roof while stringing lights, Alexa has to figure out who’s been naughty or nice.

Former high powered lawyer Marcie Diggs continues her work defending low-income clients. As the aftereffects of the pandemic strike, Marcie helps a Community Care Assistant who’s being charged with criminal negligence. And a case involving the self-defence killing of an off-duty cop exposes a rift between Marcie and Halifax Legal Aid that could see her leave the firm.

It’s a Nightmare On Elm Street . . . for real! In this documentary/reality series, chilling re-enactments reveal victims’ terrifying nightmares when they had a close encounter with the spirit world. A witch reaches into a boy’s dreams, an Amazonian Shaman lashes out, a man transforms into his demon-self to battle the forces of evil, and a succubus stalks the night.

Drama series about a group of African American women navigating life, love, friends and career in their 30s. At the end of Season 4, Fatima humiliated the senator’s wife who tried to coerce Zac into sex, Danni and Preston said goodbye, and Sabrina and Maurice were arrested for bank robbery. Now Sabrina faces a first, terrifying day in jail, and Preston comes barging back into Danni’s life with a confession.

President Franklin is out picking up hookers on the street, his serial killer son Jason is coming back from the dead despite mommy dearest Victoria trying to kill him, and the White House staff are literally dodging bullets at the start of the season. American politics is A Lot, especially in this tongue-in-cheek drama series.

The following series are available as complete Box Sets from November:

Catch Up from Thursday, 3 November

Catch Up from Tuesday, 29 November

Catch Up from Sunday, 6 November

Catch Up from Sunday, 6 November

Catch Up from Sunday, 13 November

Catch Up from Wednesday, 30 November

Catch Up from Tuesday, 1 November

Love Off The Grid Season 1

Catch Up from Tuesday, 29 November

Watch Love Off The Grid now

Catch Up from Wednesday, 2 November

Catch Up from Wednesday, 2 November

NB! Keep checking, because new content is added to Catch Up all the time – particularly on Access, which often gets new treats from TLC (DStv Channel 135) during the month. 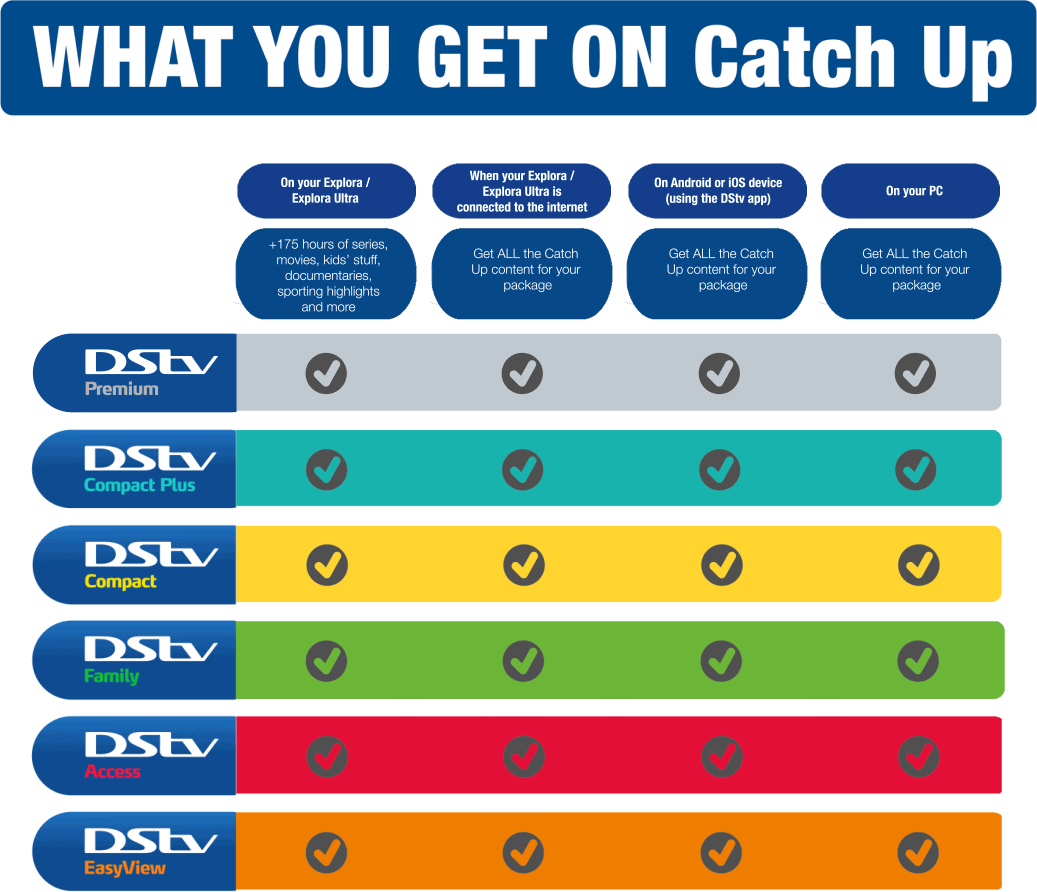