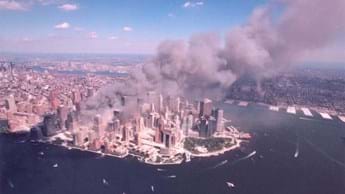 The 11 September 2001 attack on the Twin Towers of New York’s World Trade Center has become one of the most controversial events in recent history. But from that tangled wreckage, it’s still possible to recover a compassionate, human story of the events of that day.

“This project was about the survivor as a means of understanding the events,” insists TJ Martin, co-executive producer of the new 6-episode National Geographic (DStv channel 181) documentary series 9/11: One Day In America. “At least in this country, everyone has an opinion, and it turns into a slippery slope of geopolitics. This was an opportunity for us to put a face and a name to the experiences for those who survived it.”

Director Daniel Bogada adds that they wanted to bring the story to a new generation, too. “When I started the series, I did ask some young people (aged around 18 or 19) what they knew about 9/11. And with a lot of people the knowledge is next to zero. Tom Canavan (a survivor of the attack), who works at the National September 11 Memorial Museum says that sometimes tourists come, and they point to the Freedom Tower (built on the site of the former World Trade Center), and they say, ‘The people jumped from there’. So, I think it was important to create this 1 stop shop where you inform people and educate people about the reality of the day, the scale of the horror, but also, the humanity.”

Bringing the ghosts to life

Over the course of three years working on this documentary, TJ, Daniel and the production watched around 951 hours of archival footage captured by journalists and bystanders – including the Naudet brothers, French siblings who were coincidentally filming a documentary about a rookie in the New York Fire Department firehouse on the day of the attack and captured the only footage of the first plane flying into the North Tower of the Center.

They interviewed 54 people over the course of 235 hours to create first-person accounts of what happened, from the moment the first planes left the ground, to the search through the rubble for survivors after both towers fell. Drawing on all of that, they had to find a clear way to tell the story.

What was one of the critical discussions that you had at the beginning of the series?

Daniel: Most of the things happened within 102 minutes. So, from one plane hitting, to the second tower collapsing, that's where most of the stories are. And there was a question of how do you tell all those stories, while at the same time trying to make it feel like you're immersed. I remember Caroline (Caroline Marsden, series producer for 72 Films) and I watched a lot of the archive and a lot of stories. And then we had a phonecall with TJ. Our idea was: Let's have just the archive and oral testimony, let's not have anything else.”

TJ: With this notion of a first-person testimony with immersion in the past, you're actually building a bridge to what it's like to carry the events with you. It adds another layer to this notion that it’s like processing PTSD and processing trauma, without actually saying that.

How do you sift through 951 hours of footage?

Daniel: We had an archive team that had started work before I even joined. For several months they had been working just there. Their mission was to bring together, in one place, all the archives they could find. We just had to watch it all! And the archives would continue coming in until we were well into the edit. It was important that (most of) the archive came at the very beginning, so we could see which were the strong sources of archives, and the characters that we could follow in there, and then create the structure. And we wrote treatments, based on all the research we’d done.

Daniel and TJ both have their own 9/11 stories, too.

TJ: I had just turned 21, and my mother called me and told me about the events as I was driving from Seattle, my hometown, to university. As the events were unfolding, my mom was telling me that we were under attack. All I could do was listen to the radio en route to school. And then once I got to school, I couldn't find a TV. It took me about 24 hours before I actually saw images of the events. So, seeing actual materials that were captured of the events is surreal, because so much of it, I was just creating in my imagination while trying to make sense of it.”

Daniel: I was a similar age. I was 20, about to go into 21. I had recently moved to London, I'm originally from Paraguay. I had just moved in with some friends, and another friend calls me up, and he goes, “Turn on the TV. It's the end of the world!” What does that mean? So, we turned it on. And the Towers were burning at that point. We just stayed glued throughout the rest of the day. It was horrific. The main thing was trying to contact my mother, because I knew she would think that I was there, even though it made no sense for me to be there. I imagine that it would have been the same case for so many mothers, certainly in New York, anywhere in the United States and anywhere in the world, really.”

National Geographic (DStv channel 181) is available on DStv Premium, Compact Plus, Compact and Family. To get DStv, click here.